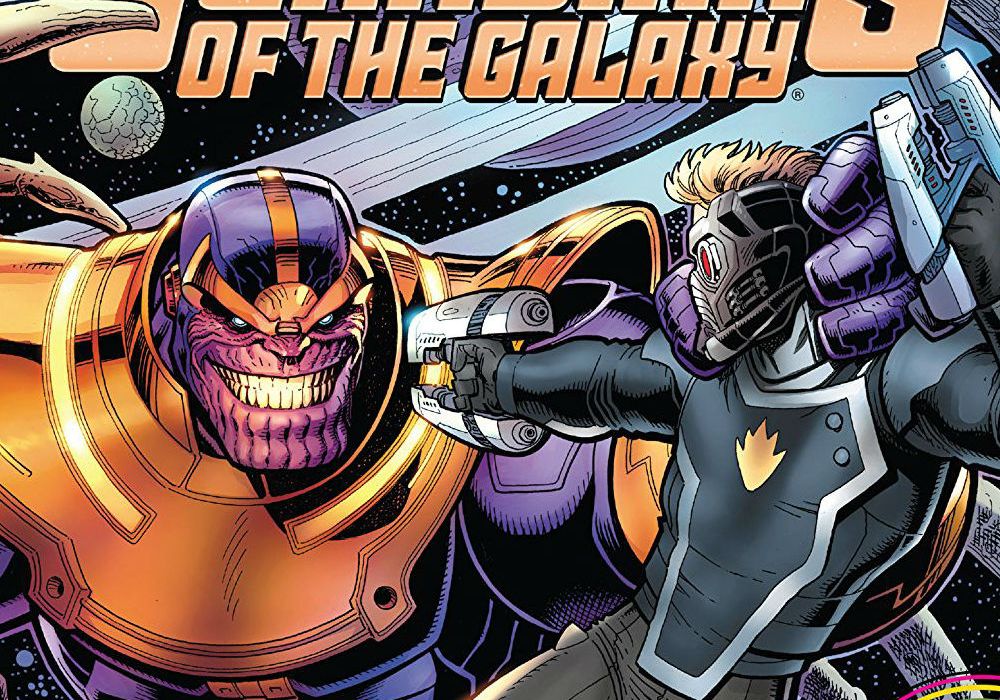 Brian Michael Bendis is currently responsible for a huge portion of Marvel’s publishing output. The writer is presently working on some of the most beloved franchises in the medium, pushing lots of new characters right now. As soon as his name was attached to “Guardians of the Galaxy,” it was hard to be anything but skeptical about his tenure on the series.

The lack of characterization for individual team members, pacing and storylines that push the serialized medium of comics forward were missing from his recent comics. Flash forward a couple years later and we’re in the same place but Bendis has announced a sudden departure from the book. Thankfully Thanos is along for the ride this time. 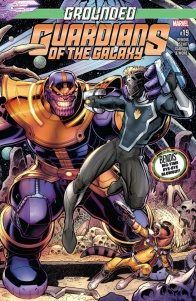 Brian Michael Bendis’ last issue!
• It’s all built to this! GROUNDED comes to a conclusion with this double-sized blockbuster as Brian Michael Bendis wraps up his epic run on GUARDIANS!
• With the team stuck on Earth and scattered to the winds, could the only thing to bring them together truly be…THANOS?
• Featuring art by series artist Valerio Schiti and special guest artists to celebrate the end of an era!

You heard correctly, Thanos is in this issue. Please however don’t ask why. Don’t ask if this series has been building to a huge confrontation with the Marvel Universe villain. Don’t ask what exactly this scheme does that separates it from other plots to take over the world. Don’t ask if Thanos stands a chance against Earth’s Mightiest Heroes all by himself because this issue certainly doesn’t have the answers for you. The good news here is that the Grounded storyline is wrapping early, which was a status quo shift for the “Guardians of the Galaxy” that forced the team members to stay on Earth. The team could have easily left at any point here, but the Marvel claimed that there was absolutely no reason that could Star-Lord could escape.

Bendis has publicly mentioned that Thanos was not in the cards before he thought about this final issue. On a more surface level that might now seem to matter, but it does. From a pacing standpoint having Thanos push forward for a huge conflict all in the space of one issue is an incredibly lofty goal. Bendis doesn’t even have the page real estate to make this issue feel as epic as it should. This story itself does have an interesting angle in that Thanos is trying to take on the Earth when they would least expect it. The villain is also looking to use the council of alien worlds as a means to take the conflict to Earth which is a really nice touch. The good ideas stop there and the usual aspects of the series continue to drone forward. The Thing clobbers, Peter Quill is snarky, Drax hits things, Gamora is angry…etc.. This isn’t the issue where readers are going to learn new things about these characters.

This issue pits nine characters against one and doesn’t even bother to properly end the conflict here. Bendis dips out of the fight scene late in the issue much too early and doesn’t even give a teaser as to why Thanos decided to attack the team in the first place. Thanos is supposed to be a villain with lots of cache in the Marvel Universe, one that the Guardians aren’t equipped to take on themselves. Its issues like this that start to lessen the impact that the character has as a whole by giving him far too much exposure and not enough weight as a villain. Thanos feels like every other Marvel villain in this issue and that’s the real problem with this climactic final issue.

The one aspect where this issue delivers is in the art department. Valerio Schiti continues to deliver stunning pencils in a timely manner. The artist even stretches his legs with an emotional sequence that holds a nice surprise. Schiti’s layouts, faces and character work is just stunning in this issue. The camera angles and characters littering the background in the last couple pages make for a really heartfelt send-off. The fight scene in the middle is stretched out a bit to give some of the other artists a chance to shine. There’s nobody who particularly stands out amongst the crowd aside from the insanely detailed double-page spread from Ed McGuinness and the really lovely juxtaposition between Flash Thompson’s conflicting state of mind captured so vividly by Kevin Maguire. There’s no weak link in the rest of the line-up but it can be hard to try and find exactly where one artist ends and the other begins. Colorist Richard Isanove does a great job in making sure this is coherent.

There’s an incredible potential lying dormant within the Guardians of the Galaxy franchise waiting to be tapped into in the recent comics. Bendis was very rarely able to hone the potential with mysteries that were dragged out to long, razor-thin characterization and stories lacking a proper three-act structure. This installment shows more than ever that the franchise needs a fresh voice to stay relevant in comics. The final confrontation with Thanos led by the “Guardians of the Galaxy” has no lasting impact or affect that this series should in setting the stage for the next chapter of the book. The anti-climactic final moments fall so short of the high expectations readers had regarding the final moments of this story. The last page in particular is a throwaway moment that sums up my feeling regarding this series over the past couple of years. Kudos to the art team who turn in some lovely work here.

Final Verdict: 4.0 – Sit Bendis’ final issue of Guardians out and hope Marvel takes more chances with the launch of “All-New Guardians of the Galaxy” in May.