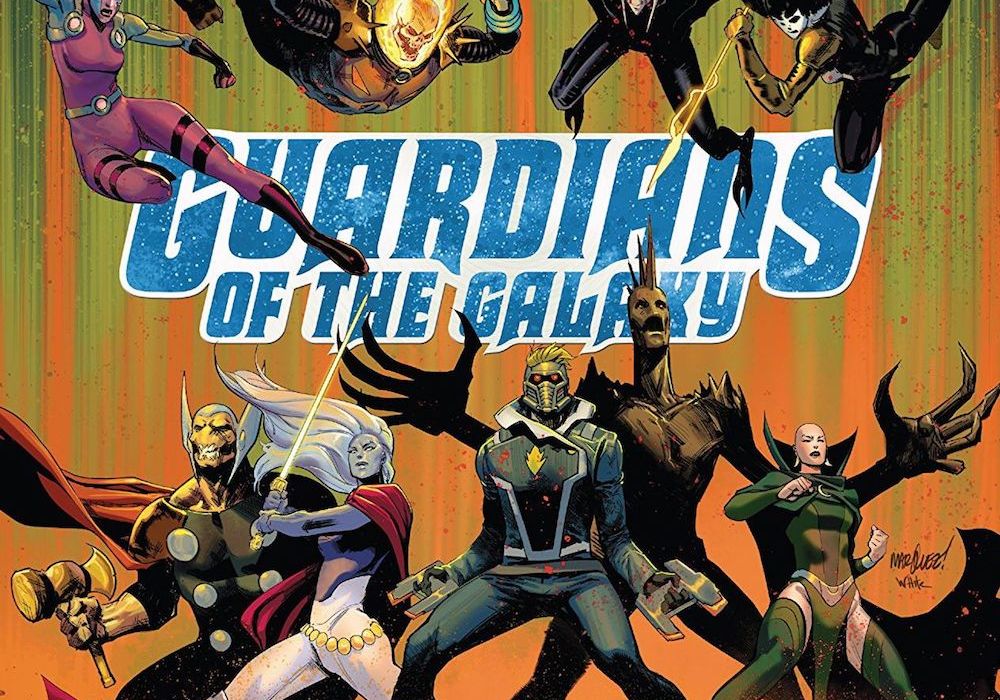 Thanos is back (again)! “Guardians of the Galaxy” #6 caps off a wild first arc by Donny Cates and Geoff Shaw, but does it stick the landing or burst into a ball of flame? Space analogies are hard, guys. 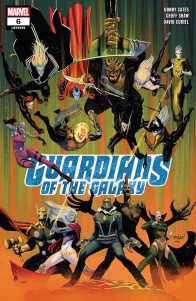 “The Guardians of the Galaxy vs. the Dark Guardians vs. Hela and the Black Order! It’s all out chaos, and it’s about to get a whole lot worse…with the resurrection of Thanos!”

If ‘The Final Gauntlet’ is anything to go by, Donny Cates is not wasting time with his fresh take on Marvel’s premier space oddities. It’s been an opening arc of blockbuster scale and thrills, easily establishing this as the most interesting volume of “Guardians of the Galaxy” since Abnett and Lanning’s seminal run of the mid noughties. Certainly, it’s the first to be published since the dawn of their MCU incarnations that comes anywhere near close to capturing the essence of James Gunn’s cosmic romps, all the while avoiding the pitfalls of being an outright imitation.

The story picks up in the wake of last issue’s devastating revelation that the new host of Thanos was to be none other than Eros, his very own brother. This sixth issue opens with the Mad Titan’s once-dead eyes opening again with a powerful glow, it’s a perfect scene-setting image that acts effectively as a starting gun for this fast-paced twenty pages of action and snap decisions. While in a different context some of this issue’s character beats may appear somewhat rushed, here the narrative gives good reason for them to be. As Hela begins the process of transferring the mind of Thanos into his new living body, the story takes on a profound sense of urgency that is constantly pushing it forward.

What follows is an all-out brawl between the united forces of the Black Order and the combined efforts of an extended Guardians roster. If your issue is to be comprised largely of action, you’d better hope that it reads well. Fortunately, Cates and Shaw are more than capable of concocting a battle that is both cinematic and bursting with energy. The impressive juggling of a bulky cast amid the chaos is reminiscent of Endgame‘s ambitious finale, with each of the core six members of this new team given a chance to show their worth.

The dynamite pairing of Shaw’s art and colorist David Curiel reaps great results once again. Together, they craft an issue that feels genuinely epic in scope and unmistakably cosmic. Perhaps more impressively, they succeed in humanising a cast that is both thoroughly alien and (in most cases) tremendously powerful. By honing in on facial expressions and body language, there is never a moment in this issue where a character’s emotions aren’t clearly readable and it adds a huge amount to the stakes of the fight.

No more is this true than towards the end, during a fateful confrontation between Star-Lord and Gamora. Without divulging spoilers, it’s a fantastic moment that serves to develop both characters individually and their relationship together. Cates is writing a Gamora that is focused, unsentimental and a bona fide force to be reckoned with, serving as a breath of fresh air from the slightly watered down version featured in the movies. Gunn’s outings may benefit from taking notes.

But, while their cinematic adventures have certainly gifted the “Guardians of the Galaxy” with a raft of new opportunities, so too does it leave them shackled to certain plot points. Indeed, it’s a shame that mere panels after the aforementioned Star-Lord/Gamora interaction, their next conversation immediately removes some of the impact. It seems that, for the foreseeable future at least, we are to be stuck with a romance between the pair that simply isn’t interesting in the slightest. Seeing Star-Lord profess his undying love for the umpteenth time is genuinely frustrating, as their whole dynamic seems perpetually stuck in the same place it was years ago. It’s getting very tired.

This is one of only two major criticisms there are to report on this issue, with the other being a shameless tie-in that is both disjointed and renders this story not entirely complete. Granted, this was likely to be an editorial instruction demanded of Cates from the Marvel higher ups, but it still seems comes off as a cynical use of a popular character done only to boost sales rather than for any creative purpose.

These imperfections aside, there can be no denying that “Guardians of the Galaxy” #6 and the arc it caps off are both a rousing success. Cates once again earns his reputation as one of Marvel’s hottest current talents, kicking off his run with a story that has been an absolute blast to follow. He confidently commands every character and throws them into hot water with reckless abandon. Having Shaw and Curiel tackling art duties has been a blessing, as their work has pulsed with energy for the duration. Incoming artist Cory Smith has big shoes to fill. If you’ve been missing out on “Guardians” until now, make sure you catch up and hop on board for the next arc. If this is anything to go by, it will be a scorcher.

Final Verdict: 9.0 – “Guardians of the Galaxy” #6 is a fantastic conclusion to this volume’s opening arc, providing action-packed thrills and engaging character beats in equal measure.