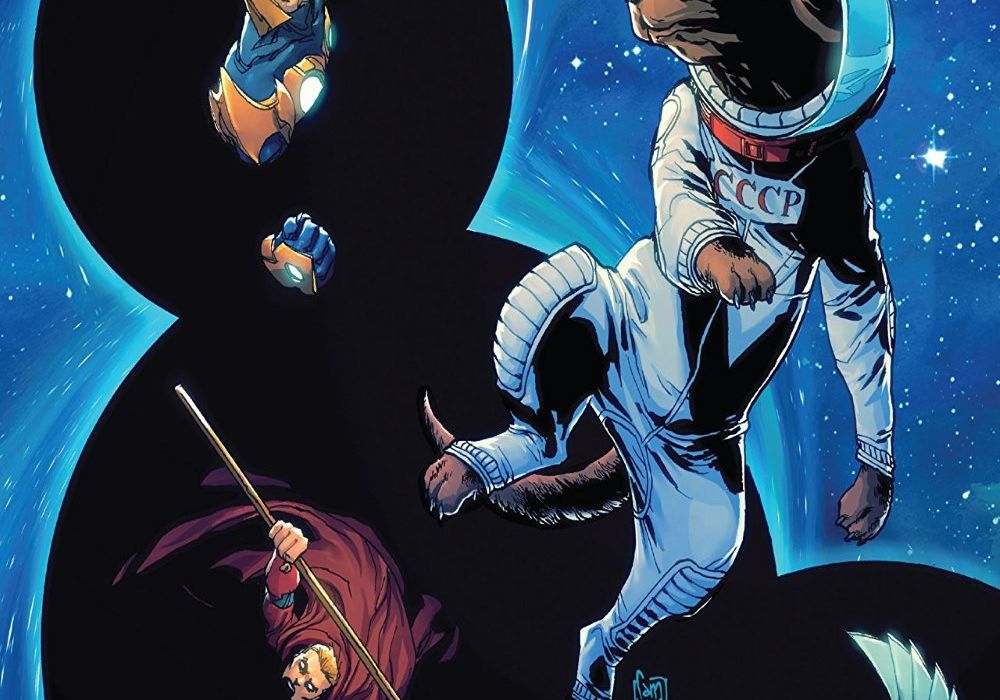 This “Guardians of the Galaxy” run has been the shot of energy the series needed. After a groundbreaking epic decade of books from creators like Dan Abnett, Andy Lanning, and Keith Giffen the series became a repetitive pirate book, with the familiar gang from the movie (and Avengers as guest stars) going to silly planets and doing crime. This annual contains multiple stories, checking in with characters we haven’t seen since issue #1, and in doing so the issue frames different styles of cosmic storytelling against each other and forms a meta-narrative about the best way to do a “Guardians” comic. There was a lot to this annual. Are you ready to fly in? 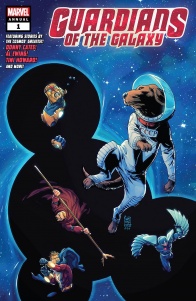 Since the Black Order’s attack on the galaxy’s greatest defenders, the cosmos has been wtihout its heroes. Find out what really happened to Nova, Quasar, Adam Warlock, and Darkhawk! And who better to tell this story than Cosmo, the Spacedog?

These sorts of stories often are book-ended by a single story, in this case Cosmo the space dog helping the Universal Church of Truth find the wayward Guardians. This of course gives us an opportunity to check in with Nova, Quasar, Adam Warlock, and Darkhawk. There’s a strange sheen of unreality to this issue. Part of that is the dreamlike tone to the Cosmo sequences, and part of it comes from the lack of exposition. Now, I’m a huge fan of cosmic Marvel, but I had some trouble keeping up. With deaths, retcons, and rapidly expanding lore, this issue does little to explain who these people are and what their deals are.

Nevertheless, the Nova/Quasar story was the strongest in the batch. In a way, it’s a classic sort of Marvel issue. Two tremendously powerful beings meet at a table, and debate the universe. Their argument frames sci-fi adventure. That’s a great story format that goes back to Stan and Jack and Steve and the gang. Here, Richard Rider and Wendell Vaughan, argue over their perspectives. Quasar thinks that everything is going to work out. People die, but they come back. Empires rise, empires fall, that sort of thing. Rich though, he’s powerful but he works closer to the ground, and he sees the lives of ordinary galactic citizens.

“Everyone’s always looking at Thanos,” Rich says, “no one’s ever looking at the 30-cred beer.” That line gave me chills. Since Bendis took over the Guardians books in 2012, I’ve lost count how many times the space heroes have fought Thanos, or Thanos has gotten his own miniseries. In all that time, we’ve lost track of what was going on in the Shi’ar Empire. We’ve blown up and restored Hala, but we haven’t checked in with a regular family there. Writer Al Ewing (who is probably the best writer at Marvel right now) neatly sums up what’s been missing from these books for years.

But then we’re checking in with Adam Warlock. He’s on one of those planets, dealing with a strange asexual alien species and their religion, which worships… him. It’s a classic sort of Warlock story you might have seen in the 70s, and while the science fiction of it all was really interesting, Warlock’s characterization read as a little flat. He’s one of those powerful Marvel space-dudes who’s treated as a god, but isn’t comfortable with that sort of attention. But nothing about the way he was presented here made me feel for his plight.

Finally we check in with Darkhawk who’s going through some sort of psychedelic breakdown. The art in this section is awesome, the layouts even more so. Broken narrative captions, crowded panels, and some seriously trippy distorted figure-work make you feel for Darkhawk, who is being sucked through a hole in space. He has visions of his past and things yet to come and wakes up on a ship in the custody of Kree, Skrulls, and Sh’iar. Then he takes off his mask (which he’s never been able to do before) and finds out that he’s been… turned into a baby.

He’s freaked out about this. So am I. But then the story ends on a to be continued. Right as we were getting to the good part, the story just sort of ends with a fadeout that reads like a big ‘ol fart sound.

It’s hard to assess issues like this, made up of so many disparate parts. While the art was consistently good throughout, the writing was very different in quality. Not that some of it was good and some was bad, it presented parts that never came together into a unified whole. The Cosmo story held promise in things to come. The Nova/Quasar story was a wonderful discussion on what makes a space comic work, but with no signs on how it’s going to pay off later. The Warlock story felt like vintage Marvel sci-fi. And the Darkhawk story was a gonzo mindscrew, a trip to the Twilight Zone.

I guess the comfort is that I’m cool with all of these directions. They’d all make for good comics. I mean if it were up to me, Al Ewing would just spin this conversation out into an ongoing series, but then again, I’d put Al Ewing in charge of everything. The point isn’t to look at this book as an ad for other books though, but to assess it as a story. And as a story it doesn’t quite work. It’s sometimes beautiful, sometimes insightful, and deeply impressionistic. But it never manages to feel coherent, which ultimately prevents the issue from reaching its potential.

Final Verdict: 5.9 – the individual chapters aren’t bad, but this issue never feels like its telling a real story