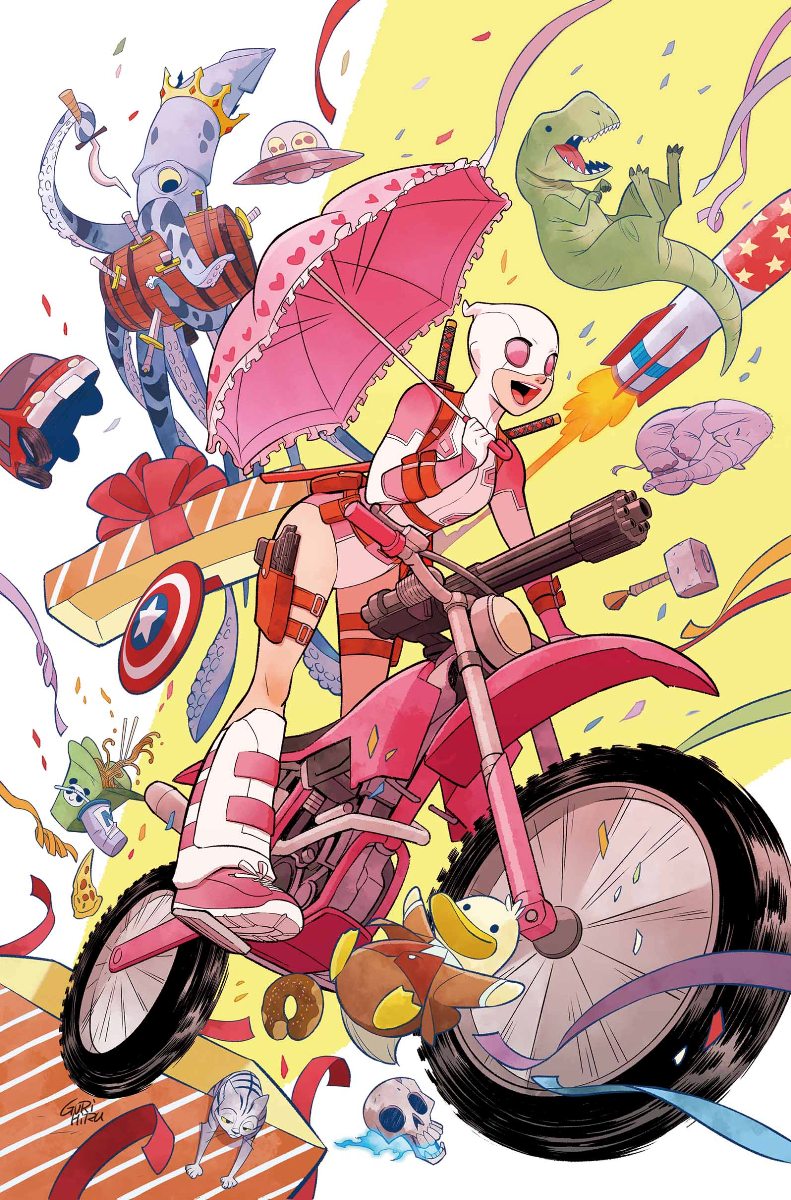 Blasting off from the pages of “Howard the Duck“, “Gwenpool” #1 introduces a new meta-hero to the Marvel Universe. But will Gwen Poole be able to find her own niche in this world of super powered comedians already leaning on the fourth wall? We’ve got some spoilers ahead but read on to find out. 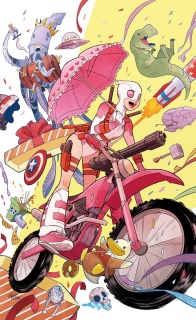 2015’s overnight internet sensation takes center stage in her own ongoing series! Gwen Poole used to be a comic book reader just like you…until she woke up in a world where the characters she read about seemed to be real! But they can’t be, right? This must all be fake, or a dream or something, right? And you know what that means…NO CONSEQUENCES! Could Gwenpool truly be Marvel’s least responsible and least role-modely character to date? She can if she tries!

I was not immediately sold on the “Gwenpool” character when I first saw her in the back-up stories in “Howard the Duck.” Gwen, basically the cool fiery Spider-Gwen we know and love, but with none of the powers or Deadpool’s love for murder and self awareness, felt less like a fresh new character and more like Marvel’s attempt to cash in on some of that sweet sweet Harley Quinn money, despite the fact that DC’s current Harley Quinn is more Deadpool than Harley Quinn. Her solicitation is even calling her “2015’s overnight internet sensation” which is a title I would ascribe to Gwenpool and nothing else from Marvel. So now we’ve got a character pretending to be a character pretending to be a character while also tapping into the aesthetic of a completely different character. Comics. Even though I wasn’t the biggest fan of Gwenpoool when she showed up in “Howard the Duck”, the first issue of her solo series does a lot to legitimize the character, even if I am creeped out by how blatant this whole thing is.

You know how the Deadpool movie had Wilson be aware that he was in a movie with no real explanation as to why? In the comics, we’ve kind of gone with the blanket statement of “the experiments that gave him his powers made him so crazy that he knows he’s in a comic.” Even when the writers don’t address it, it’s something you’re just meant to accept whenever Deadpool talks about how hard he’s going to face fondle Hugh Jackman. I was kind of worried that “Gwenpool” would do something similar with its character, having her just be a generally wacky character who gets into #antics. Instead, Gwen is actually from our world, Earth-Prime (or whatever the Marvel equivalent is). There’s no explanation as to how she got into the 616 (to be frank, I never finished her “Howard the Duck” back-up so the answer might be there) but Gwen takes it all in stride, relying on the idea that acting like a crazy person will be enough to help her survive in a crazy world. She responds to bank robberies with outlandish gunfights, alien weapon dealers with a massive amount of confidence, and even picks up characters she knows will be her sidekick. In fact, coming into this world with a fangirl mind even helps in her actual fights, as she’s able to beat a Sentinel by remembering its move set from the X-Men arcade game.

It’s all a really interesting angle to take a character with, espsecially since this issue plays perfectly to the tropes that have been prevalent in a lot of Marvel’s latest titles: New wacky character finds a reluctant sidekick who is not-so-wacky to highlight the former’s wackiness, jokes and japes ensue. “Gwenpool” #1 plays with that kind of story right until the end when Gwen’s actions catch up to her and the dynamic of the book completely changes, adding a real sense of danger to Gwenpool’s world.

That said, “Gwenpool” isn’t exactly some gritty “Watchmen”-style deconstruction. Just look at that cover, there’s dinosaurs and umbrellas. It’s a wonderfully lighthearted book when it wants to be. Since Gwen is an obvious Deadpool fan, what with the same costume and all, it stands to reason she’ll use her newly found sense of invincibility to go all Merc with a Mouth on the world. Jump off a plane to land on an enemy base? Sure. Casually kick a guy into a furnace to take credit for his massacre of said base? Why not! Take a bath with rose petals while staying in full costume? World’s your damn oyster, Gwen.

In fact, it’s the book’s initial cheeriness that makes its ending all the more unexpected. Walls are broken, MODOK shows up, and the book’s colors just get darker. I don’t want to give away too much because it really is one of those unexpected endings that are so rare in comics, but I was really impressed by how much Hastings and Gurihiru were able to turn this book on a time and make it something better than expected.

Final Verdict: 8.6 – “Gwenpool” really surprised me with how inventive it felt. I’m still iffy about how corporate the premise of the book feels, but “Gwenpool” #1 really played off my expectations to deliver something I did not see coming.