The first run of “Gwenpool” ended when Gwen decided she’d rather let her comic end than become a villain and embraced a happy ending. Fortunately, her time at Marvel didn’t end there, as she became a member of the West Coast Avengers. Now she’s trying to do whatever it takes to remain relevant in “Gwenpool Strikes Back. Will this be the comic to ensure Gwenpool’s continued existence? Let’s take a look and see. 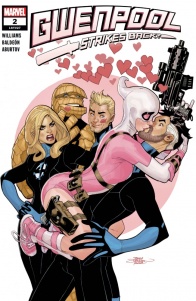 BREAKING UP THE FIRST FAMILY OF MARVEL!
Gwen’s mission to make sure she matters to Marvel leads her to a new occupation: homewrecker? She’s gonna use her newly discovered powers to mess with the FF so they can never forget her… or she’ll die trying!

This is, shall we say, an interesting issue for Gwenpool. In-character, she’s struggling to build and maintain a place in the Marvel universe, which she acknowledges requires pandering to the audience. In this case, she describes it as “the ‘sex sells’ issue,” requiring a fair amount of smooching and (obviously) Deadpool on a stripper pole.

Yes, in spite of the comic focusing on Gwenpool’s attempts at getting a “flagrant cover image” of her smooching Reed Richards, the real core of this issue is the Gwenpool/Deadpool team-up. (And yes, Gwenpool gets top billing in the team-up name, because it’s her comic.) There’s a fun history for the characters; in spite of Gwenpool also being aware of the fact that she’s in a comic, and her outfit being clearly based off Deadpool’s, she never actually read his comics. And of course, the first time she met him, they fought.

In this issue, though, they make a good team. Leah Williams writes some really nice banter and fourth wall breaking chemistry between the two, but chemistry that we’re constantly reminded is entirely platonic. Gwenpool even takes a moment to call out “the future Marvel writer who tries to hook us up someday — because I know one of you pervs is gonna try it” by establishing their age difference is too significant for any potential relationship.

Which is honestly a real relief. So we instead get them discussing the potential downsides of seducing each member of the Fantastic Four, wreaking havoc in their base, and throwing around fruit snacks in an amusing callback to classic comic advertisements.

Oh, and Gwen is confirmed to be bisexual, which is a plus for bi representation in comics.

With that said, the Fantastic Four (or at least three-fourths of them) still have a role to play. They’re a good choice for Gwen to target, given their history and importance as “Marvel’s first family.” Reed and Sue get a few humorous lines, and Reed’s stretching powers are put to good use both in the story and David Baldeon’s illustrations. Although the real standout member of the Four is Ben Grimm, whose deadpan reaction to Deadpool trying to defeat him with fruit snacks is a one panel beat, then “I’m goin’ back to bed.”

The comic is undeniably funny the whole way through. We get good gags both visual and written, nice callbacks to Gwen’s role in the “West Coast Avengers” comic (including Jeff, her land shark and Multiversity’s favorite good boi), and solid usage of fourth-wall breaking.

David Baldeon helps carry the story with his illustrations, bringing a lot of energy into the comic and characters. The great energy and motion he puts into Gwen when she’s addressing the audience is amplified by how expressive he makes her, while he also clearly has plenty of fun drawing Deadpool. The way they move about the panels and react to everything adds a lot of life to both characters and improves their synergy.

Similarly, what he does with the Fantastic Four and their powers is great. Reed Richards stretches this way and that, wrapping up the others with his stretchy limbs and flowing about, but it all feels natural. Similarly, Sue’s forcefields are given strong geometric shapes when she hits Gwen with them, and the glow about them helps add to the space they take up.

The amount of shading and detail in each page helps add depth and liveliness to every moment. Jesus Abrutov hits it out of the park with the colors, complementing the energy and designs wonderfully.

And while we don’t get to see Gwen’s powers in action too much, what we do get plays with the comic panels nicely. At one point we see Gwen pull down the panel behind them, before seeing it from behind as a sort of translucent screen as Deadpool trips over it. And I don’t think I’ll ever stop enjoying seeing characters try to turn their own pages or peel back the panels they’re in to escape.

Yet throughout the issue, I felt like something was missing. Writing the review now, I realize what it is.

In the previous “Gwenpool” comic, even when Gwen was working as a henchman for M.O.D.O.K. or running from the law, there was an undeniable amount of love for comics and the heroes in them. Sure, she’d break into Miles’ school and freak him out over knowing his secret identity, but she used her knowledge of comics to identify a recurring character and help save the day. When her evil potential future self gave her the option of extending her series indefinitely by unmasking heroes, she refused in a dramatic speech about how much she loved all the characters.

In “Gwenpool Strikes Back,” she’s so concerned over her place in the Marvel universe that the same level of passion for comics and the characters just doesn’t seem to be there. The first issue had her nearly unmask Peter Parker, while this one has her mess with Reed and Sue’s marriage. That love and respect for the characters feels slightly more absent, even if her comic knowledge is still on full display.

Does that make it a bad comic? Not at all! It’s just a missing piece of what made Gwenpool so appealing as a character before, which hopefully we’ll see return as the mini-series goes on.

Honestly, that missing element is my only actual criticism of the issue. It’s a key factor for Gwen’s character, but aside from that, the comic continues to be entertaining, humorous, and clever the whole way through.

Final Verdict: 7.5 – “Gwenpool Strikes Back” has great character banter and chemistry, plenty of dynamic energy in the artwork, and a nonstop parade of humor comic fans will love.