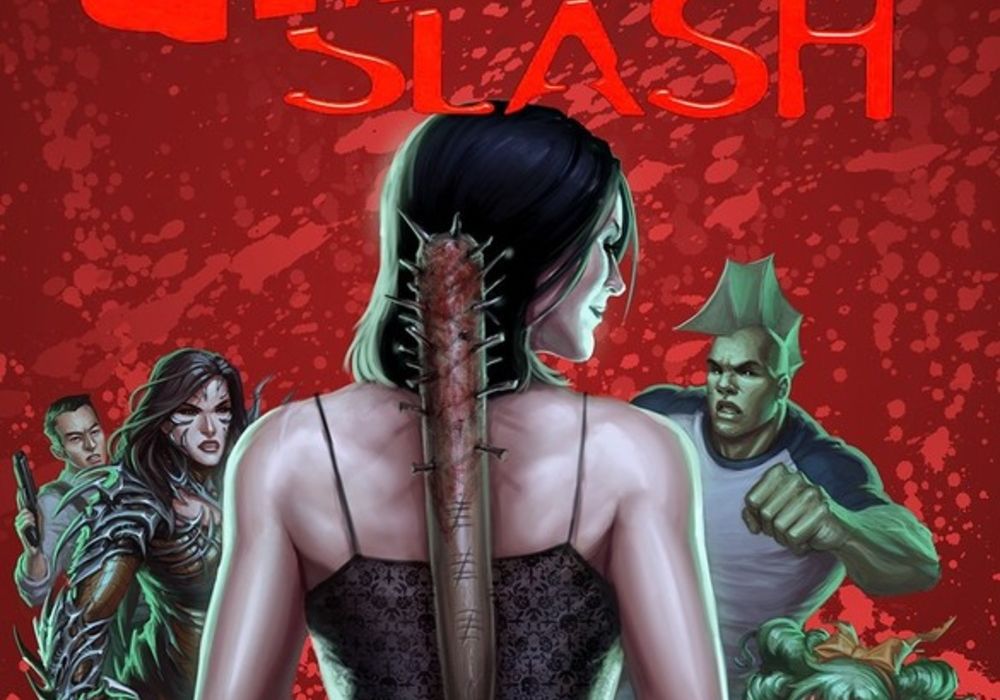 Full disclosure: One of our staffers (Greg Ellner) has contributed work to this particular title. While this has not affected the review in any way, I feel that it is important to inform you, the reader, that we have done our due diligence and are aware of the potential conflict of interest before the review begins.

Are you feeling overwhelmed this holiday season? Is the societal demands of excessive amounts of red and green flavored comfort and joy just too much to handle? Do you long for buckets of blood, over the top violence, and mayhem?
Well, if that’s the case, the “Hack/Slash 15th year Anniversary Special” #1 is here for you! 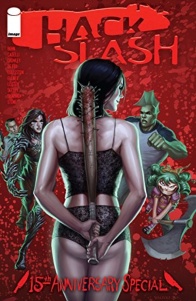 Celebrate the 15th anniversary of the bloody tale about the slasher victim who fought back with these brand-new stories from HACK/SLASH alumni STEFANO CASELLI, EMILY STONE, and DAN LEISTER, as well as new, emerging talent! Plus: an unmissable lead story from—and about!—disgruntled comics writer TIM SEELEY, who makes a wish for Cassie Hack to become real… and then becomes a victim himself when his creation swears to kill him.

In 2004, as series of one shots under the title ‘Hack/Slash’ hit the stands. It was a series about a young girl and her massive, slightly deformed sidekick who drove around the country hunting murderous psychopaths who preyed on teenagers known as slashers. It was a tribute to the gory, excessively violent, a little smutty, and cheesy slasher movies of the 1980’s.
Now, hundreds of issues, several publishers, and quite a few epic crossovers later, ‘Hack/Slash’ is celebrating it’s 15th anniversary and they’ve created a special issue to process and celebrate the series’ success. It’s filled with facts, pinups, and most importantly, original content in the form of three new stories. So, since the format of the book is kind of weird what we’re going to do is briefly discuss each part of the book

The pinups and series compilations are great. Each individual picture does a great job of capturing the mix of punk, goth, teenage murdering psychopath energy that made the comic successful and whether you like them or not will entirely depend on your personal taste in art. The series compilations are a way for the readers to take a look back at the scope and scale of the series and process the strange and bizarre journey of the series and its characters, including a list of all the books published which is helpful for anyone who might want to jump into the series. While these parts of the book aren’t really that important, they’re still a nice thing to have.

The highlight of “Hack/Slash 15th Anniversary Special” #1 is in its three original stories, with the longest and most significant one being ‘Your Darlings Kill You’. It’s a very self-aware story about legacy and impact of the comic. Series creators, artists and writers Tim Seely, Emily Stone, Dan Leister, and Stefano Caselli all get to make an appearance on the page and Seeley literally gets the chance to meet some of the characters he’s created, and flee in terror from a goddess of storytelling and a very angry teenager who not happy that her life has been a mess of slasher villains and gratuitous titillation. It is a fabulously meta and tongue in cheek story that offers an interesting bit of insight into Seeley’s mind and his personal thoughts on what he’s created.
Spoiler alert: most of his thoughts on the series involve a love of bad slasher films, a surprising amount of guilt over how the main character has been treated over the years, and being upset that the series hasn’t been made into a movie. You know, the usual creator problems.

The artwork for ‘Your Darlings Kill You’ comes courtesy of long time series artist Dan Leister. The artwork does a great job combining the super natural elements of the comic along with the mundane aspects of the real world and the art is at its best when Leister is drawing fangs, blood, and tentacled monsters. If the artwork has a problem, it’s with the way Leister draws faces and emotions, which look a little stilted and unnatural, especially at the beginning of the story. Still, it’s fitting that the story be drawn in a style that has been an integral part of the comic for so long, and it’s a fitting way to celebrate the legacy of the comic.

The second story in “Hack/Slash 15th Anniversary Special” #1 is a story titled ‘Abyss’ and is written and lettered by Brian Crowley with art by Jules Shapirov. It’s a short, four page story that simply shows the two heroes Cassandra and Vlad sitting in a diner and talking to each other. While Crowley doesn’t have any monsters or over the top violence, there’s a very definite sense that these two characters care deeply for each other and that Cassandra is just incredibly tired and mentally fried after fighting for so long. It’s a nice bit of emotional development for the characters and a touching bit of insight into what years of monster hunting and killing would do to the mental emotional health of someone who has been doing it for so long.

Shapirov’s artwork is an interesting creative choice for the story. On the surface, it looks a little too simplistic, but the colors and soft line of the art helps create a soft and calming atmosphere that compliments the quiet nature of the story well. It’s a nice, calming change of pace in a comic loaded to the brim with blood and violence.

The third and final story is titled ‘System Ready’ and is written by Sam Eggleston with art by Jay A. Defoy, colors by Addison Duke, and letters by Crank!. It’s a short story that takes the comic to a place where most long running horror franchises inevitably wind up: in some sort of sci fi dystopia and/or space. Still, despite the change of setting the concept remains the same: there are monsters killing people and the main characters are here to stop them.

Out of all three of the stories, this one is probably the weakest when it comes to the writing. It’s a story that doesn’t have a whole lot to say about the nature of the slasher genre or the emotional state of the characters, it’s just a monster that needs to be stopped and the people who get down and dirty in order to kill it. However, while it’s certainly the weakest story, it’s probably the best in terms of art quality. Defoy does a great job of imbuing the setting with character and personality, creating a hellscape world where people are addicted to virtual reality and the monsters are weird freakish collections of tech molded and welded onto psychopaths.

“Hack/Slash 15th Anniversary Special” #1 is an interesting issue and a great way to process the legacy of the long running series. All of the art, all of the stories, and all of the information gathered into the book is a celebration of the fabulously cheesy, over the top, and borderline excessive craziness that has allowed ‘Hack/Slash’ to survive and thrive all these years. Here’s to fifteen more years of slashers.

Final Verdict: 9.1 – A fantastically meta and tongue in cheek way to process the creative journey, legacy, and emotional roller coaster of a great series.