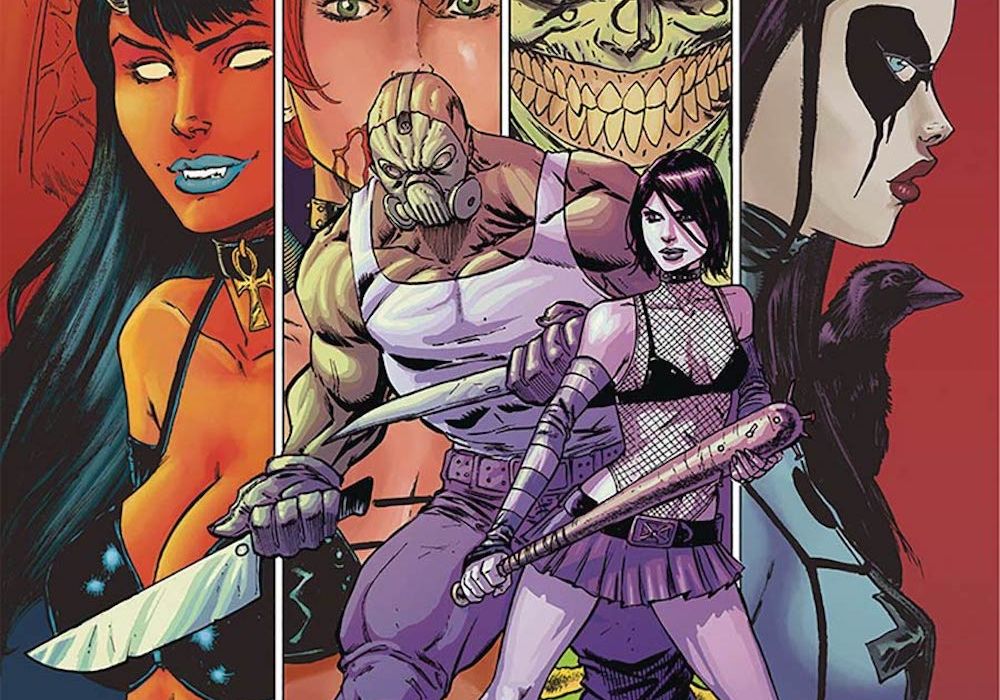 Acting as both a fantastic continuation of the “Hack/Slash” epic and a good jumping on point for new readers, “Hack/Slash vs. Chaos!” shows that Tim Seeley hasn’t lost his touch at all when it comes to the horror hunter genre or his decade-and-a-half series to bring in new readers with a new team for the artwork.

Cassie Hack, Slasher Hunter Supreme, thought she’d gotten rid of those teenager-perforating undead menaces. But now they’re suddenly springing back to life! Cassie and Vlad are going to have to team up with megadeath dispenser Evil Ernie to stop the slaughter, putting them on a path that appears to lead through Chastity, the Chosen, and Purgatori! Tim Seeley returns to his beloved creations to pit them against the world’s greatest horror universe and brings back some of the series’ most beloved slashers!

With “Hack/Slash vs. Chaos!” #1, Tim Seeley slides back into the writer’s chair on his horror epic for the first time since 2013. However, readers would be hard pressed to think that, given how seemingly effortless his continuation of his series truly comes across.

For new readers, Seeley enables this crossover event to be a jumping on point, even if the audience has never read a “Hack/Slash” comic before. Minimal, yet highly effective summarization provides the absolute basics of Cassie Hack and Vlad, while the “Chaos” cast members are given enough introduction to help get a feel for them from the perspective of someone meeting them for the very first time. By using only the bare minimum of introductory elements in exposition, and only in a way that is truly natural such as a comedy opening or a speech to try to demonstrate how Ms. Hack and Ernest “Evil Ernie” Fairchild are not so different from one another, Seeley enables newcomers to figure out the basics of the relationships between characters without spoiling much, if any, of earlier developments in the horror epic.

Rather than delve only into blood and gore, as one might expect of the subject matter, Seeley instead looks at a more emotional, overall calmer look at the entirety of this crossover. Blood is spilled, combat does happen, but the main focus of the story is on the smaller, quieter moments where his writing really shines. From the aforementioned not-so-different speech to comedic after-action antics such as getting high on drugs around a campfire to get to know one another or teasing comments about potential sexual relations with the other team, Seeley eases readers into remembering, or just learning, exactly who these people are, in particular the ones that have already crossed paths before this crossover itself. In examining these characters, Seeley is able to delve into not only general personalities, but also their internal conflicts and at times conflicting missions, enabling readers to feel sorry for even those who they have barely even met by way of examining how the “heroes” of both “Hack/Slash” and “Chaos” are similar in not only their happier ways, but also the darker ones steeped in manipulation.

Much like other Seeley works, the writer can fit in comedy in the bloodbath, around it, or in the seemingly quiet parts of the world itself. Such moments range from the awkwardness of trying to talk reasonably after the “let’s you and him fight” scenario typical of crossovers, to the black comedy of Evil Ernie’s attempts at heroism through his malicious instincts on one of the most awkward road trips imaginable, to attempts by Vlad to be the only sane man in order to reign in his partner, to even the most mundane of comedic sources: basic malapropism and otherwise awkward wording. The ability to fit humor into situations like those Seeley pulls together, classic of his style in several of his horror books, makes the truly dark, scary revelations and emotional quiet drama scenes all the more impactful.

Also a signature of Seeley’s “Hack/Slash” style, adult-themed content is ramped up significantly from the previous runs in “Resurrection” and “Son of Samhain.” Using such pieces as nudity and illicit drugs, Seeley shows that the story, while perhaps wackier than some of the previous takes, is nonetheless definitely for a mature audience, as even the aforementioned nudity is not entirely for the sake of drawing a wandering eye, and is on some level quite disturbing. Furthermore, this focus on mature-themed content emphasizes the relative impurity of the “heroes” of this tale, furthering the connection between the two universes even further than simply having them fight one another ever would.

Rapha Lobosco, another returning “Hack/Slash” alumnus, has definitely refined his style since the 2017-2018 “Hack/Slash vs. Vampirella” miniseries. Lines are thinner and more distinct, lending a less cartoonish and more realistic vibe to the entire endeavor that grants the threat of the crossover appropriate gravitas. Rather than relying on exaggerated poses or over-the-top action to facilitate the artwork (not to say those things do not exist), Lobosco instead relies on the subtleties in different characters’ facial expressions and behaviors, working in tandem with the script to provide quiet intensity or unnerving or comedic hammy performances depending upon the character of choice. Of particular note is the distinct difference between Cassie Hack’s hardline, angry, barely restrained demeanor and Evil Ernie’s own outwardly carefree, but more nightmarish, near perpetual smile. Furthermore, the thinner lines make use of heavy shadows in key moments, such as a shadow over someone’s eyes to demonstrate their emotional distress, more notable.

Dynamic fight scenes with heavy motion lines help to give a sense of how fast all of the scenes are truly moving, increasing a sense of… well… chaos to the combat, especially when relative equals are matched up against one another. One particularly interesting note is how at times the artwork blurs some parts of the combatants’ bodies completely out of focus to concentrate on what is actually important to the conflict itself, enabling a closer focus overall.

One of the most notable pieces of artwork would have to be the “not so different” speech by Evil Ernie. The background showcases both of the protagonists’ horrific childhoods, with near mirror images to allow readers to see just how right Ernie truly can be. Meanwhile, as those images are slightly less distinct due to being just thoughts in the back of the head, Cassie Hack’s intense, icy glare is all the more noticeable in the foreground, bringing the reader into the present while also leaving the concepts addressed in the back of their mind.

While the close-ups and realistic detail are a definite show of good depth, the relative lack of such detail can also be a source of comedy. For example, a multi-panel road trip has much less detail on the faces due to being a further off view, but the ridiculousness of the situation helps to sell the artwork very well as a fun piece.

Dee Cunniffe’s colors show a high level of detail that adds quite a lot of depth to the already stellar illustrations. The focus in on the disturbing greens of the supernatural and the icy blue of Cassie’s eyes both stand out against other, relatively mundane colorations, granting a subtle, but noticeable difference that draws the reader in and makes it hard to let go. At the same time, the faded green of the aforementioned, mirrored backstories adds a pseudo-mystical bent to the connection that demonstrates how different sides could connect to the undead.

Shadows and light sources play a large part in the coloring, especially when it comes to a campfire or the light of supernatural influences, adding a significant depth to both the dimensions of a scene and the menacing or relatable nature of individuals. At times, rather than using any of that light at all, Cunniffe avoids any color at all on a background, letting the individual characters tell the story as they focus their attention inward.

A fun, emotional, inviting endeavor, “Hack/Slash vs. Chaos!” #1 shows that even a crossover like this can be inviting for all kinds of readers.