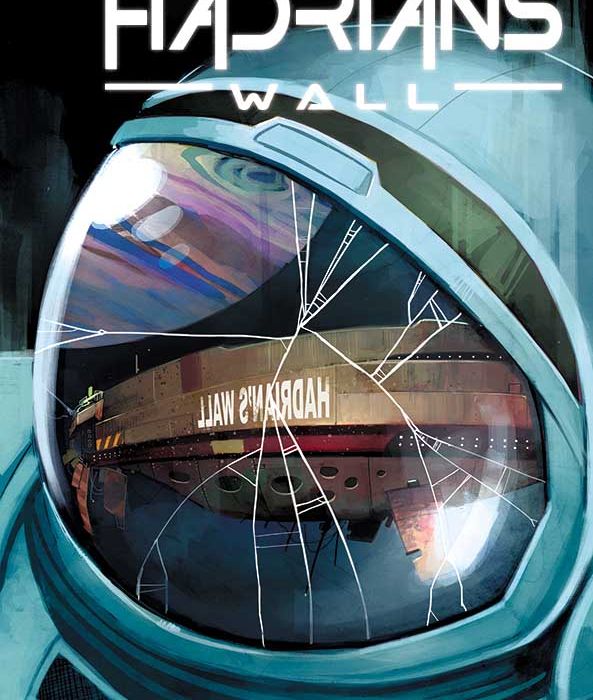 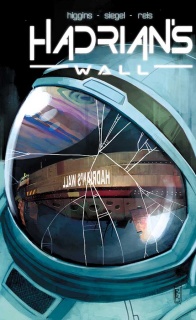 Written by Kyle Higgins & Alec Siegel
Illustrated by Rod ReisWhen an astronaut on HADRIAN’S WALL is murdered, pill-popping detective Simon Moore is dispatched to investigate the ship’s crew… including his own ex-wife. But if Simon’s not careful, what he finds could make the interstellar Cold War go red hot. From the creative team behind the critically-acclaimed series C.O.W.L. comes a gripping, locked room murder mystery where the secrets of everyone involved are as dark as the space that surrounds them.

We’re at such a weird place in pop culture, with comics in particular, that I have to specify which “murder mystery set in space” Image book I’m talking about. I like Image a lot but their total embrace of creator-owned stories has overlapped in some really niche ways. The good news is that “creator-owned” is still the operative word for Image as “Hadrian’s Wall” has enough personality to distinguish itself from contemporaries like “Southern Cross” while taking its readers to the stars.

Hadrian’s Wall is a space station that’s doing pretty well for itself. At least as well as you can do as a non-sentient space station in a universe where Earth is in a Cold War with its largest colony, Theta. Unfortunately, one of the station’s inhabitants has their suit malfunction in the cold vacuum of space which leads to Simon Moore investigating the death on behalf of the station’s owners. Because life is a cosmic joke, the victim Simon’s investigating is also the man who stole his wife and shot him in the process.

Simon Moore’s a pretty weird filter for “Hadrian’s Wall” to tell its story because his story seems relatively small to the whole “there’s a colony that’s kind of rebelling against Earth” thing going on in the background. Instead, this issue focuses a lot on Moore’s relationship to the case and his ex-wife. In the space of this issue, we don’t really get a lot of sense as to who the other people on the ship are, what the victim meant to anyone who wasn’t his girlfriend, etc. There’s a few hints towards something bigger that ties into the Colonial Cold War I was talking about, which future issues are likely to expand upon, but the first issue of “Hadrian’s Wall” takes a very personal approach to introducing us to its world.

Still, even if you’re not keen to listen to a guy complain about his ex-wife in space for a few pages, the artwork in “Hadrian’s Wall” is worth the price of admission. The opening scene with the victim slowly losing control of his spacesuit and dying in front of a sun peeking over the horizon of a planet like he’s in Mass Effect 2 is a striking introduction to the series. Rod Reis’s artwork looks like a cross between Frazer Irving and Mike Del Mundo, a painted style that gives the book a more realistic look while still giving us beautiful shots like the opening sequence. Even though “Hadrian’s Wall” is set in space with all its blacks and steel grey, it’s still a colorful comic thanks to the smart coloring from Reis that paints Simon’s flashbacks with his ex-wife Annabelle in a warm sunset. Speaking of Simon, his silent deadpan reaction to his wife’s boyfriend dying was my favorite moment in comics this week. All in all, it’s at least worth it to check out the art in “Hadrian’s Wall”.

As pretty as it looks, “Hadrian’s Wall” still doesn’t feel like it’s built up a w hole lot of the world outside of Simon Moore. With the exception of the last page reveal that something is afoot, there’s not a whole lot of intrigue to the guy dying in space. Dude went out and his suit broke. If it happened to George Clooney it could happen to anyone. Annabelle comes off as really cold, which makes sense if your new man died and they sent your ex to investigate it. Other than those two, it doesn’t feel like there’s a lot of people populating this space station, outside of the few who show up to facelessly help in Simon’s investigation.

Final Verdict: 6.7 – “Hadrian’s Wall” starts off with a pretty strong premise and some seriously gorgeous art but it’s up in the air whether or not there’ll be enough meat to really support this miniseries. That said, “Hadrian’s Wall” does have a little personality of its own that will just take some time to really show. This is one of those reviews that’s kind of hard to do just because for “Hadrian’s Wall”, more than most series, it feels like I really should be reading the full story before I give a final verdict. So, uh, check back in a couple months for the trade.