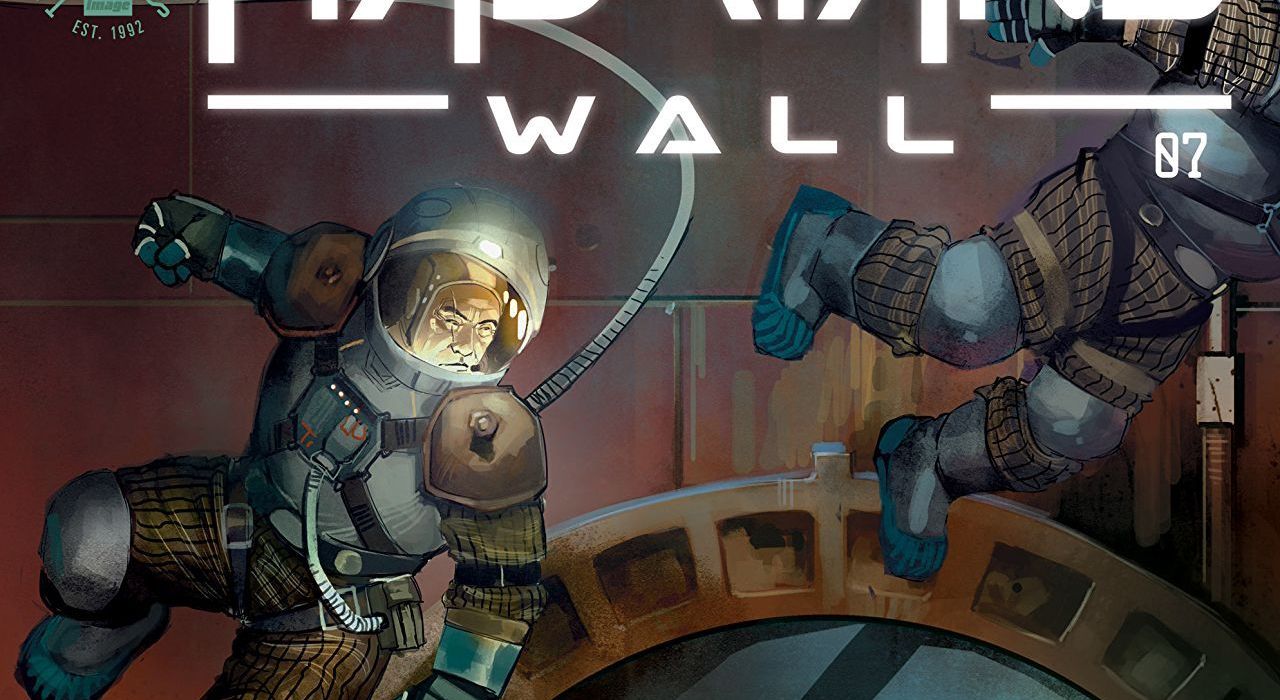 The original premise of “Hadrian’s Wall” was killer: a locked-room murder mystery, on a space station far from earth, set to be investigated by an irascible detective with a crippling drug addition, a tortured past, and unresolved connections to both the murder victim and the prime suspect. Seven issues into to this limited eight issue run, the murder seems to be solved, but many other questions remain. 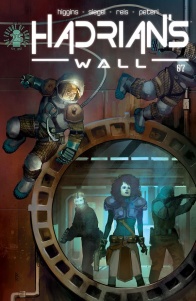 A plot revealed. A new murder committed. An entire planet in jeopardy.

Needless to say, from the very start pill popping ex-cop Simon Moore has been the central focus of “Hadrian’s Wall.” He is the sarcastic-yet-wounded protagonist (both physically and emotionally), as well as the moody, brooding apex of the long-since imploded love triangle on which the whole story is balanced. Without a doubt, is Simon’s cantankerous, occasionally hallucinatory narration that drives the story forward and keeps the reader hooked. Shift the focus elsewhere, and the whole thing collapses beneath its own weight, despite the supposed intrigue of interplanetary rebellion and the imminent potential deployment of an “extinction level” weapon. Unfortunately, for the last several issues, including this one, that’s precisely what writers Kyle Higgins and Alec Siegel have done.

What was once a very human story, wrought with powerful human emotions, highly relatable characters, and expertly crafted small moments, has become an unwieldy, ill-focused essay on greedy corporate interests vs. the common good. The “interplanetary cold war” backdrop has been shoved to the forefront, while Simon’s more interesting story has been relegated to the back. His unique and compelling voice still frames all of the action, but I’m not sure why it does. He’s certainly not emotionally invested in the colonist’s rebellion, or even particularly interested outcome, it seems. Similarly, the rebels appear vaguely interested in solving the murder of “one of their own” and bringing the killer to justice, but only on a cursory level that seems a little too forced, or even obligatory, in light or more pressing matters, such as possible war.

Luckily, I would buy this book for the incredible artwork alone.

Rod Reis’ illustrations (with Eduardo Ferigato on this issue) exhibit a unique and engaging style, especially within the sci-fi genre. First off, the rhythm and pace of the panels is absolutely spot on, with an excellent mix of sizes, shapes, and aspect ratios that subtly guide your eye from beat to beat, moment to moment, invisibly turning your attention exactly where it needs to go. Occasionally, an element even breaks free, refusing to be constrained by its panel’s border. Note, for example, how the doctor’s hand and arm overlap the panel border and bleed off the page as he violently thrusts a syringe into his unwitting victim’s neck. Later, shards of glass break free of their panel, too. Indeed, in various key scenes throughout the book, the dramatic action literally explodes off the page, adding tremendous impact to the panels that use this technique, without ever pushing it too far and turning it into a gimmick.

Reis’ line work, as well, has a style all its own. His thin, almost wispy lines perfectly communicate the characters’ emotions through distinct, yet nuanced facial expressions – especially with their eyes. In one scene, in the space of three brief panels, a rebel character goes from hard-ass, to surprised, to passing out, all of which can be seen just by looking at her eyes.

And then there’s those luscious colors, somehow striking the balance between bright and otherworldly
with desaturated, washed-out accents that give entire book a sort of faded, melancholy feel. In addition to the cold steel blues and blinding whites so characteristic of the sci-fi aesthetic, Reis also mixes in a healthy dose of magenta, purple, and ominous electric lime greens that clearly evoke 70s and 80s computer CRTs. This may be a world with Faster Than Light travel, but it’s more akin to Blade Runner than it is to Star Trek, which brings it all back to human emotions.

“Hadrian’s Wall” started incredibly strong and easily maintained that momentum throughout the first four issues, all of which focused on Simon’s investigation in the murder of his earthly nemesis, Edward. The plotting was very well paced, the dialogue sharp and witty, the characters well rounded and eminently relatable. To the extent that other themes and subplots were introduced, they were clearly secondary, meant to inform the action, not supplant it. This was a classic noir, in which everyone is a suspect, the tension artfully heighted and exacerbated by the confines of the space station’s airlocks. Somewhere along the line, however, the fascinating tale of a self-medicating detective and his tangled past was abandoned in favor of bigger issues, all but divorced, it seems, from real human emotion.

At the end of the day, if you’ve been a fan of the series, by all means keep going and pick up this issue. It does fill in some blanks about the rebels’ plans and the artwork, as always, is gorgeous. But if you started missing Simon a few issues back when the focus clearly shifted, you’re sure to miss him even more in this installment. He’s there, but he’s not really important. His story has been lost in the interplanetary intrigue.

Final Verdict: 7.0 “Hadrian’s Wall” #7 features gorgeous artwork, decent dialogue, and starts to tie up some loose ends, but the original noirish feel is long gone, shifting the narrative focus even further away from the book’s central character.