Josh Tierney and Afu Chan delve into the concept of humanity and divinity as they barrel towards the final issue of their reunion mini-series. 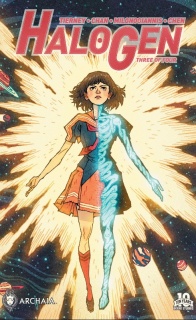 In a shocking display, Det takes down Hale so that she, Rell, and Mason can reach the HaloGen ship and escape. As they make their way back to Cityship Q, Rell has to figure out what to do with Det.

Picking up right where last issue left off, “HaloGen” #3 opens with potentially the most frantic fight scene of the series so far. It’s dynamic, emotive, and executed with minimal dialogue: in short, it’s all the best elements of the series condensed into a few short pages. I was originally drawn to “HaloGen” because of Chan’s slick, stylish, and minimalist first issue cover – the body of Rell careening to the ground amid a sea of futuristic skyscrapers – but the first couple of issues felt oddly static in comparison to that image, full of possibility, but never quite capitalising on their potential kinetic energy.

As the issue continues, the physicality again takes a bit of a backseat in favour of dialogue, with Mason and Rell filling in the rest of the HaloGen crew on the adventures we’ve just seen, and batting about the potential meaning behind Det’Houva’s (their world’s version of God) reappearance. There’s a big sense of a larger story at work in Tierney’s writing that I feel he’s only been able to scratch the surface of so far. His world-building skills are clearly on top form and the numerous shadowy corporations and nefarious secret (and potentially double) agents seem fully formed and believable. But the intricacy of such a well-peopled world in a four-issue run means that his characters spend a lot of their time explaining who’s who in connection/opposition to whom. This tangled web, coupled with Tierney’s decision to utilise hardly any narrative boxes means that “HaloGen” feels like it might flow more smoothly as animated feature, with characters able to talk and act in unison. As it is, some of the wordier panels feel a little as though they’re being invaded by overfilled speech bubbles.

Which is a shame because, once Tierney stops explaining his world and starts letting his characters live it instead, there are some really great storytelling sequences on display in this issue. A particular highlight for me is a philosophical couple of pages in which Rell and Det muse over the difficulty Rell’s superiors are having categorising Det, punctuated by an unexpected, but brilliantly executed knife-fight. Rell’s recklessness and protectiveness are implicitly on display here, as well as Det’s macro level omnipotence and micro level childishness. The whole sequence flows more seamlessly than the previous forty pages and I think the series as a whole could’ve benefitted from this more decompressed storytelling style, even if it had meant expanding it into a six issue run.

Chan’s art, on the other hand, has been stellar throughout, and issue 3 gives us a chance to take a longer look at the lower half of the CityShip than we’ve been able to in previous issues. Chan’s design throughout feels like it’s heavily influenced by classic anime/manga. From the Cowboy Bebop style futuristic city-scapes to the Ghost in the Shell-esque character designs, the stylised world of “HaloGen” should feel comfortably familiar to anyone who enjoys gritty, Akira-style future-cities, and it’s a welcome departure from the sterilised, monochrome future that a lot of comic-books offer up. Chan’s jagged character designs feel reminiscent of Ron Wimberly’s work on “Prince of Cats”, and Colourist Shelly Chen seems to have selected a similarly warm, earthy palette that further adds to the welcoming realism of this series.

It’s the dynamic nature of Chan’s artwork that really seals this series for me, specifically the panels that see the HaloGen crew in action. Chan’s hyper-flexible bodies look best when they’re in motion, and the movement of his characters, often accompanied by manga style ‘action’ lines, feels so strong that it’s as though they’re threatening to leap from the page. Chan’s panelling and pacing is understated but efficient and, when Tierney offers up a near silent few pages for Det to get to grips with Rell’s apartment, Chan’s given a chance to do some great visual storytelling. One particularly interesting addition to this issue is the inclusion of a few, well placed, fisheye lense panels that offer a great, slightly warped perspective throughout the issue. Chen’s colours shine throughout this issue and she manages to draw clear distinctions between the reds, oranges, and browns of the lower city and the whites, greys, and silvers of Robotics HQ. Her subtle, almost watercolour style inking brings to mind Jake Wyatt’s “Necropolis”, especially in the light, childish execution of Det.

There are a number of weighty issues that are brought up in “HaloGen” #3. Ideas of religious fanaticism, discussions of deities as data, use of children as weapons and lots more high-minded stuff floats through the issue but, perhaps because of the brevity of the series, it doesn’t feel like each cause is given the focus that it deserves. Tierney has created a damaged but redeemable protagonist and an interesting and diverse roster of supporting characters but it seems as though the story he’s trying to tell is so focussed on its own conclusion that these characters never really get a chance to expand themselves. Three issues in and I’m still not sure who’s story “HaloGen” is trying to tell. It’s a shame, as I feel like my only real complaint is that I’m too interested in too many elements of the story and yet I still feel a little unfulfilled. It’s kind of like  I’ve been presented with a tray of tantalising h’orderves, when what I want is a three course meal.

Final Verdict: 6.2 – A solid enough continuation of a promising mini-series. Here’s hoping there’s a longer run in the offing somewhere down the line!