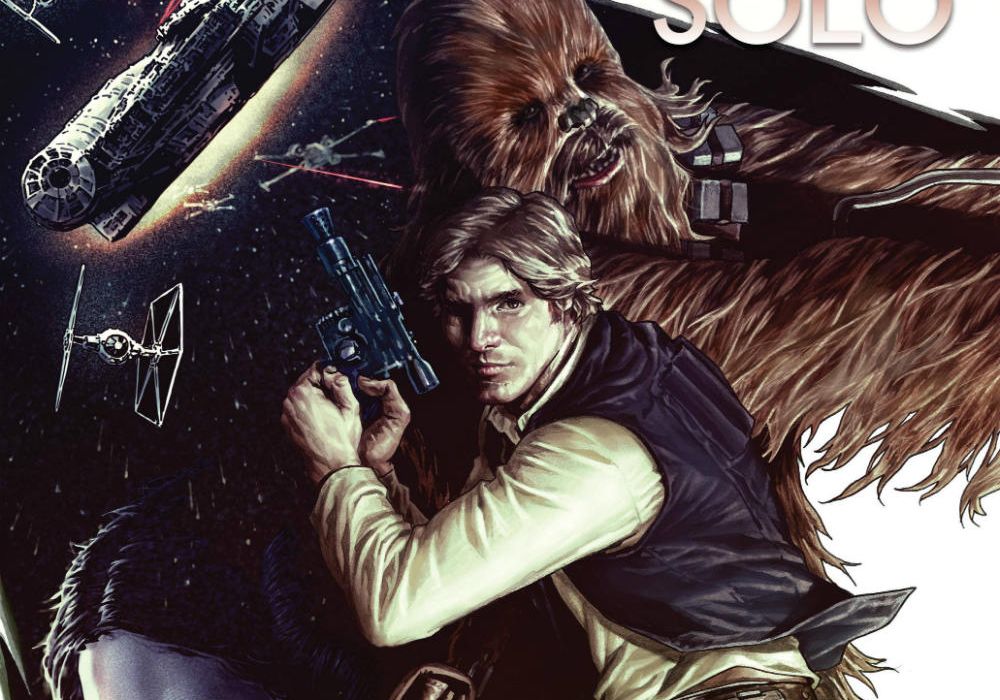 The most beloved stuck-up, half-witted, scruffy-looking nerf herder in at least this galaxy finds himself the latest subject to the Marvel treatment. The next installment of the “Star Wars” limited series line, from Marjorie Liu and Mark Brooks, does what the best Han Solo stories tend to do: stick the character in way over his head and stack the odds so he has no choice but to fly by the seat of his pants. 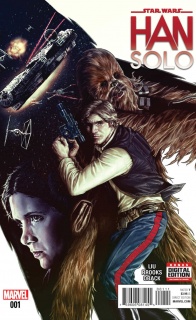 Everyone’s favorite scoundrel gets his very own series! Han is given a top-secret undercover mission for the Rebellion – rescuing a number of informants and spies. His cover for the assignment? Only the biggest and most infamous starship race in the galaxy! You know – the race Han has dreamt of winning his entire life. Will he keep his mind on the mission? And can he manage to pull it off while keeping the lead? Best-selling author Marjorie Liu (X-MEN) comes to the Galaxy Far, Far Away along with superstar cover artist Mark Brooks (ULTIMATE X-MEN) in his return to interior art! Face it, readers – there aren’t enough scoundrels in your life!

Licensed comics tend to be stuck in a corner from the moment they’re released. They have to tell a story, but they can’t do anything that contradicts with the main canon. They have to work within the already established parameters of the character arc, and even though the craftsman involved might know where said character is heading, as is the case with “Han Solo” #1, they cannot really use any of that in their story. Most of all, they have to capture the voice of the character — not just how a character might speak, but they act, react, move, or simply just stand still. And even then, two people might not have the same view of a character as the person next to them. Frankly, there’s a lot of pieces to put in place when dealing with licensed properties, and that Marvel has been generally successful with their “Star Wars” line beats the odds.

“Han Solo” #1 might be the best first issue of a “Star Wars” character comic. Marjorie Liu and Mark Brooks find a mutual place to cast the character and develop the plot from there. They develop this new and other part of the galaxy and introduce some new and other characters to the fray. Most of these creatures probably will end up dead by the end of this series, but what can you do?

Liu channels more of Rick Deckard for Solo here, and it works for the narrative. “Too much of this, and we’re low on fuel and credits,” Solo muses over a drink in a shady bar. “Chewie says I’m spooked. I tell him I’m just being careful.” Brooks draws him frequently frowning, always on edge, looking over his back, and borderline depressed. It makes sense for this more paranoid and confused Han, who’s turning down jobs and aware he’s probably on every Imperial watchlist. This lasts right until Solo takes off in the Falcon, blasting into hyperspace, which is the only time we see him crack a smile.

The setup’s very “Speed Racer”, centering around this big, expensive intergalactic race, the participants a bunch of professional racers, all with attitude. Really, he’s there because the Rebels wanted to use the Falcon to extract some covert operatives, but Han isn’t about to let anyone else pilot his ship, so off he goes. Liu and Brooks have a lot of fun with these scenes of Han working a room, up to his cocky antics. “You bring your races and your sponsors, and I’ll bring my runs — and we’ll see who wins,” he says to a group of possibly even more arrogant pilots. The real gem of the issue though, is a mid-point scene where Leia gives Han the mission briefing. The two of them aren’t at “Empire” stage yet, but there’s a spark that Brooks manages to capture. This also features some of Brooks’s strongest comic timing and visual storytelling. It’s a nicely crafted beat.

Structurally, however, “Han Solo” #1 ends on an odd note. The last couple pages aren’t exactly that effective: the issue feels like it bit off somewhat more than it could chew. The cliffhanger falls flat. Life-endangering peril doesn’t work entirely in a licensed story’s favor to begin with, but the whole last scene of “Han Solo” #1 feels tacked on. It never generates enough tension for a big reaction to that final splash page. It’s more like, Oh. Okay. See you next month, then, than ?!?!?!?!.

Despite that, however, Liu and Brooks have a strong handle on Han Solo. Their approach to the character in “Han Solo” #1 is compelling and sharp. They’re aware of what makes an in-between issue like this interesting and are able to generate some well-done scenes and strong character moments. The conceit behind this thing is fun and the execution is assured throughout. Even if the ending didn’t come together entirely, there’s more than enough bright spots to make up for it.