Things are heating up in Han’s high-speed solo mission. He’s juggling interstellar spy-work with the galaxy’s deadliest race. Surely something’s got to give? 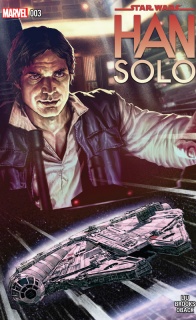 As The Dragon Void race gets more intense…Han’s rebel mission gets more deadly! Can the Falcon hold up to one of the most intense flights of its career? What’s worse for Han…failing Leia? Or losing a race?

After the unprecedented success of the cultural megalith that was Star Wars: The Force Awakens Disney’s announcement that they were going to expand the universe was hardly surprising. There’s big bucks in nostalgia mining, and few franchises have built up as much goodwill as the saga of the Skywalker family. But what was perhaps more surprising, and definitely more exciting, was Lucasfilm Head Kathleen Kennedy’s announcement that:

The standalone films can be a wide variety of genres inside the Star Wars universe, and they very definitely have a beginning, middle, and end. They are not being designed to necessarily build new franchises.

The clear focus on telling complete – and most importantly – unique, stories definitely made me reconsider the seemingly vacuous trilogy of Han Solo films, and had me squealing with delight when the first teaser for Rogue One dropped. And that spirit is clearly one that’s carried across to the comics arm of this fresh new Star Wars universe.

In the latest issue of Liu’s action-packed smuggler’s run of a story, Han and the rest of the Dragon Void racers find themselves at the mercy of hte Empire. Stopped ostensibly for ‘flying too fast’, it’s clear that someone in the Empire is aware of Han’s potential involvement in Leia’s plot to rescue her scattered web of informants. However, pressured by the mysterious overseers of the Dragon Void race, the imperial officer in charge releases Han and Co and allows them to fly the next stage of the race. A gruelling 12 hour none-stop endurance leg that pushes racers to their physical limits.

Liu’s scripting for this run has been masterfully tight, with even the most seemingly unconnected elements of story zipping back to play an important role as the narrative progresses. She’s kept her character list slim, with archetypal characters (the arrogant racer, the world-weary ancient alien, the easily spooked informant, etc) allowing her to stay mercifully light on exposition and focus on story progression. There’s a real sense of the frenetic pacing and recognisable structure of the heyday of racing movies from the 70’s and 80’s, with a script that leans on the ‘race, refuel, repeat’ formula in favour of anything more overtly complex. In Liu’s hands, however, the format feels fun and fresh, and the constantly looming subplot of Han’s secret mission for the princess allows for enough of a wrinkle that there’s always something beyond the standard racing difficulties to overcome.

Brooks has been providing solid visuals in the vein of the loose ‘House’ style that most of the Star Wars books seem to have. His strong linework and focus on emotional, cinematic renderings of faces means that this book has been surprisingly nuanced, even though the emotional beats aren’t particularly complex. Brooks’ work on ‘Han Solo’ in particular has been fun because he’s never one to shy away from a splash panel. Each of the two preceding issues has seen him work on some pretty awe-inspiring deep-space dog-fights and this issue is no different. Coupled with these darting panels is a great spread that offers up a well-constructed montage of Han’s hour by hour deterioration as the endurance leg of the race kicks off. It’s a fun and focussed spread that allows Han’s facial expressions to show rather than tell the pressures of racing.

After showering Liu with praise for her formula, it might seem a little contrary for me to criticise this issue for being a little…samey… but three issues in, the structure of each individual issue does feel a little too recognisable. It’s an odd criticism, but her pacing might a little too perfect, and at times verges on becoming predictable. However, as long as the story unfolds into something a little more unexpected, this opening few issues is definitely engaging enough to excuse the slight repetition. Also, and this is just a minor gripe on an otherwise fantastic issue, I feel like the ease with which Han and the other racers escaped the Empire made their capture in the last issue feel a little like false jeopardy. It might have been fun to see how known ‘flyer-by-the-seat-of-his-pants’ Han Solo reacted to Leia’s best-laid plans getting completely derailed. However, it’s still infinitely satisfying to see Solo in the chair of the Millenium Falcon with Chewie at his side as they swerve from scrape to scrape, still every bit as charming and charismatic under pressure.

Final Verdict: 7.1 – Another fast and furious space-racing issue that shows sometimes limiting your scope can create a wider variety of stories.