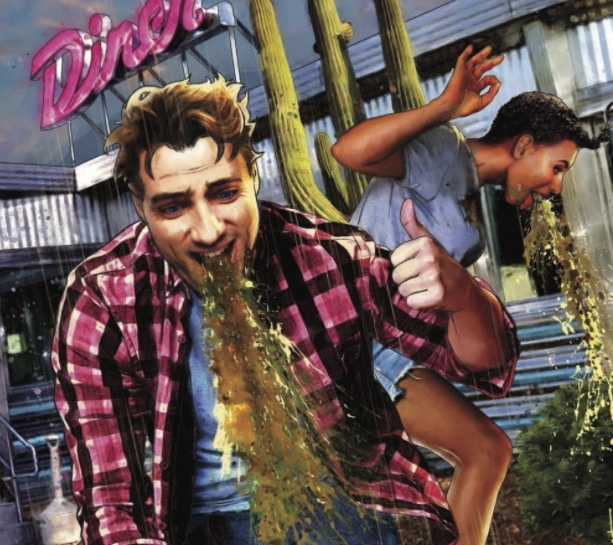 “Happy Hour” #4 sees Jerry and Kim on their way to unrelenting misery, with a few bumps in the road. Warning: spoilers ahead. 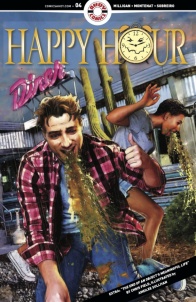 Cover by Michael Montenat
Written by Peter Milligan
Illustrated by Michael Montenat
Colored by Felipe Sobreiro
Lettered by Rob Steen In a near-future America where sadness is illegal and punishment is extreme, rebel fugitives Kim and Jerry start to succumb to the irresistible stirrings of romance and – to their horror – happiness! Extra: the best short prose stories and illustrations in all of comics!

Milligan and Montenat do good work in “Happy Hour” #4 to continue the creeping absurdity this series uses to expand on its relatively simple premise. A totalitarian society isn’t all about sleek uniforms and doublespeak, after all, nor does it need to be about katanas or mind crime. It can be as simple as a quick brain snip or two and the inability to ever feel (or show) displeasure, dissatisfaction or misery ever again. It’s not unfamiliar, and simple enough that Milligan’s aware there needs to be a bit more here to grab readers.

However, “Happy Hour” doesn’t always deliver the goods, so we’re left to experience the mounting absurdity of some disjointed plot points. It’s not that the book isn’t enjoyable, merely that Milligan tends to leave out a beat or two that’d help us absorb precisely what’s going on on the page. Some of this rushed, brittle quality comes from the book’s aesthetic, as well. Montenat’s realism makes the characters feel static, which isn’t necessarily off the mark but can hinder a smooth sequential flow. Montenat’s closeups can support more detail so we do get nuance and warmth there, but medium and wide shots of characters make them seem like paper dolls on the page. This is an aesthetic choice that does support the tone and plot of this particular comic, but it doesn’t always work when we need to drop in fully and supply some of the emotional scaffolding Milligan leaves to the audience. Flirting with unreality in form as well as premise is a double-edged sword, and requiring us to puncture it without much assistance is a shaky proposition.

One such moment is Jerry and Kim consummating their somewhat uneven sexual tension to date. This plays out with the grim, wry humor of Jerry’s previous interaction with Kim’s toes intact, but in a way that feels a bit cheap. Jerry’s on the floor with Kim’s foot on his face after a confrontation, one thing leads to another and, well. There we are. Jerry’s voice isn’t strong enough on the page to deliver the crisp, dark hit we’d get in a film, and we’ve been rushed to this point through some humorous but ultimately unemotional plot beats. What we get in lieu of a music cue in T.V. or film is a clever color choice by Sobriero in which the subtle purples and pinks of Jerry’s shirt and the dingy motel carpet become a bright, gradient background in the inset of Kim’s rapturous face. This background continues onto the next page and does a neat post-coital fade at the bottom as Kim and Jerry come back to reality.

Sobreiro’s work does give us the visual cue we need to track Kim’s anger turning into desire, but Jerry’s dialogue drags it down again and we’re left wondering exactly what she sees in this guy, to put it frankly. It’s awkward enough that the callback later in the issue predicated on this moment landing perfectly does not land itself because we’re not entirely invested in the humor the first time, much less a second. Hinging a stressful escape on a foot fetish between the two main characters is amusing and juvenile, but it’s not impactful enough on either end of the spectrum to fly. It feels forced and over-written, and the static poses and anatomy of some of Montenat’s panels evokes unreality in an unearned way.

Still, jamming together enough rushed plot beats and strange human interactions does create the effect Milligan and the team want in this story. “Happy Hour” is grim and absurd, even when it’s not entirely successful or impactful in those qualities. Sobriero does good work on the nightmare clown mobile that works as a continuous visual gag, and Steen’s clean and even font is a blessing given all the other energy in the book. Stylized lettering would simply be too much, and keeping it readable is absolutely the way to go to get at some sort of rhythm, here. There are laughs to be had, and some of Kim and Jerry’s banter does generate a feeling of warmth – for Kim, mostly. Jerry’s viability as a truly sympathetic narrator remains to be seen.

We don’t necessarily need tons of edifice or formalism to get at a true understanding of dystopia, and one of Milligan’s strengths as a writer is throwing us into the deep end to make sense of things as we go. A lack of trust in us to put the pieces together in “Happy Hour” would most certainly be worse, and some of the ghoulish charm of the world relies on brief, tense flashes of brutality. Still, edginess almost never lands in comics, and “Happy Hour” could use a breath here and there to let some true horror in before we’re whisked off to the next clever encounter or wry set piece.

Final Verdict: 6/10 – “Happy Hour” #4 throws Jerry and Kim together – at last? – with a bit of awkward plot shortcutting along the way.