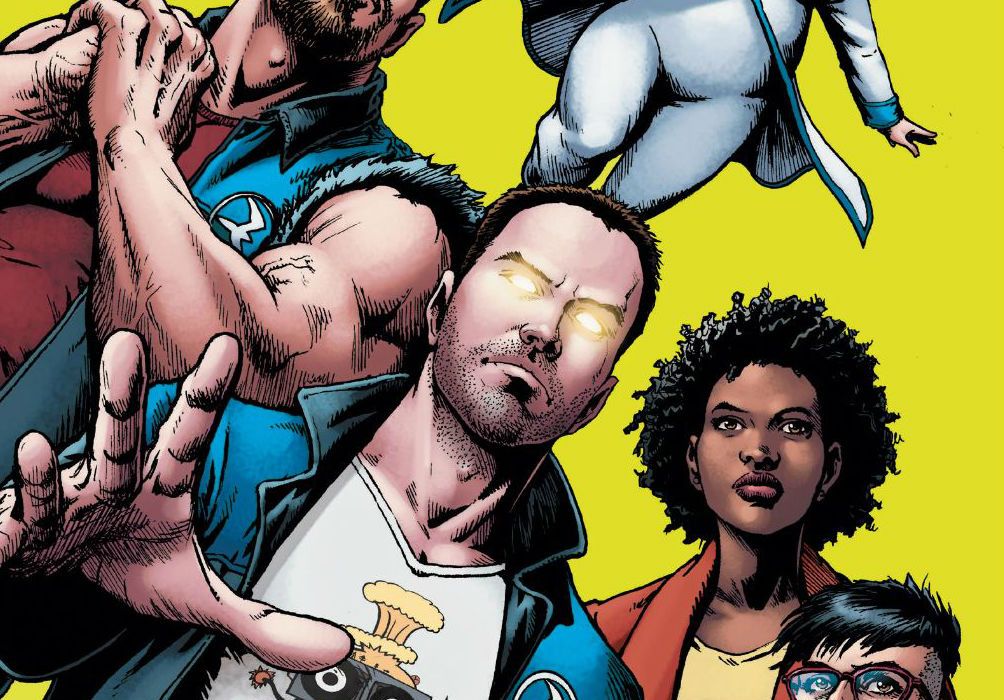 Probably the most anticipated book of Valiant’s 2016 lineup, the Renegades make their return after two years to a world they tried to save and failed. Now a new danger is on the horizon that’s going to call everyone home. Check out our spoiler-free review. 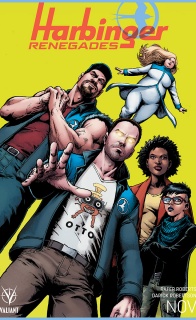 Anyone you know could become a psionically powered “harbinger” with the potential to reshape the course of human history. Your neighbor. Your boss. Your best friend. Your kids.

Six months ago, a secret team of renegade whistleblowers leaked the existence of these extraordinarily dangerous individuals to a stunned world. Today, all across the country, crude, DIY psiot activation attempts have left hundreds brain damaged…or worse. The emergence of a new psiot in a community often leads to riots and mass violence. Gun sales are through the roof.

America is terrified of what could happen next.

With this revolutionary upheaval now in motion, Kris Hathaway, John “Torque” Torkelson, Faith “Zephyr” Herbert, and Peter Stanchek are about to discover their calling. Together, the HARBINGER RENEGADES are moving from town to town, building their ranks, and subverting authority one mind at a time…and setting out to prove once and for all that behind their power, there has always been a purpose.

This November, the most fearless superteam in comics is going underground for AN ALL-NEW ONGOING SERIES from rising star Rafer Roberts (A&A: THE ADVENTURES OF ARCHER & ARMSTRONG) and superstar artist Darick Robertson (Happy!, The Boys)!

Okay, before we begin talking about this issue, I feel like I have to talk about the elephant in the room. “Harbinger” is considered one of the better books Valiant put out in their 2012 reboot, in particular due to the strong writing of Joshua Dysart. So, it was a strange thing that he was not writing this continuation, what with his “second act”, “Imperium”, feeling like it was cut off. The last few months it was discovered that Dysart was supposed to write this relaunch, but he and editorial had difficulty meeting eye-to-eye on a direction. That itself isn’t the big deal, but over the last few weeks we learned that “Harbinger Renegade” will be leading to the 2018 event “Harbigner Wars II”… the same year that Valiant is supposedly kicking off their Cinematic Universe with Harbinger as first on the docket. This could all be nothing but me imagining ghosts, but we’ve seen Marvel do some screwy things in the name of brand synergy (also, a sequel to an event comic will make one think of “Civil War II” and that only brings pain).

With all that out of the way, this issue was pretty good.

It is first and foremost an issue dedicated to reintroducing us to the characters and the Psiot world as a whole. Sure we’ve had Faith and a bit of Torque and Ax, but Peter Stanchek and Kris Hathaway have been M.I.A. ever since the end of “Harbinger: Omegas”. We have a great deal more focus on Kris here, out of prison and on parole, living with her girlfriend, Tamara, in Los Angeles. I have to say, as someone has given Valiant flack for their lacking in LGBQT characters, I really like how the relationship with Kris and Tamara. In that it just is two woman in a relationship and living together. There’s no overglorifying of it, not soapboxing, it’s just treated as a natural thing. I get the need and importance of stories in superhero universes about underrepresented sexualities, but I also appreciate it just being, you know?

More on Kris: I also appreciate how Rafer Roberts has characterized Ms. Hathaway. It is a far different character from 2012, the one who was most gung-ho about taking Toyo Harada down. This is a woman whose actions impacted the world in major ways and it has cost her big time emotionally. And yet, even with everything that has happened, no matter how angry she is with Faith bringing this madness back to her doorstep, there is still a spark in her to do the right thing. To get out there and clean the mess she had a hand in.

Roberts and Robertson also dedicate a good deal of the page space to bringing back the psiot side of the Valiant universe in full force (outside of the nice recap pages by Roberts and Raul Allen). The world hasn’t become a better place with the exposure of Toyo Harada and the establishment of the Foundation Zone. With all of Rising Spirit and Harada Conglomerate’s data on potential psiots out in the world, people have been taking it upon themselves and try to “activate” their powers… in all the gory ways that ends up happening. There are brains. There are brains that explode. If you were bothered by “Generation Zero” and “Faith” being too light-hearted, this book has you covered in the darker side of superpowers department.

But it’s not just gore and splatter on the visual menu. Robertson, inker Richard Clark and colorist Diego Rodriguez also deliver in other ways. Their style provides just enough detail in character and setting without ever going overboard. It provides a good range of expression for people, from the quiet intimacy between Kris and Tamara to the fear in the face of those that tried to activate a psiot and failed. Rodriguez’s colorwork also helps greatly with the setting the more dark atmosphere with this book, being able to bring a sense of dread and foreboding even on a sunny California day.

Now, I did gloss over some people and aspects in this issue because they still require more development. Like I said, this was all about setting up massive amounts of pieces for what is to come. That is also an explanation of the fact that there is a lot of dialogue in this book. It can come to the point where there is so much of it that even with letterer Dave Lanpher’s skills, there are times when it’s difficult to tell who’s talking.

One final note: the “prologue” by Roberts, Jose Ryp, & Frankie D’Armata. This is the beginning of the story that is probably the pathway to “Harbinger Wars II” and it takes place in the past following Toyo Harada and the Harbinger Foundation carrying out a mission to take someone out or capture them. It is interesting, if vague setup for what is to come in the next few years.

After a couple of years of being lowkey, the Harbinger side of Valiant has been making its way back in full force under new creative guides. With “Renegade”, there is plenty of opportunity ahead, now we need time to see if it follows through.

Final Verdict: 7.0- “Harbinger: Renegade” provides some good setup for the stories no doubt to come.

”Harbinger: Renegade #1” will be available in stores and digitally on November 16th.