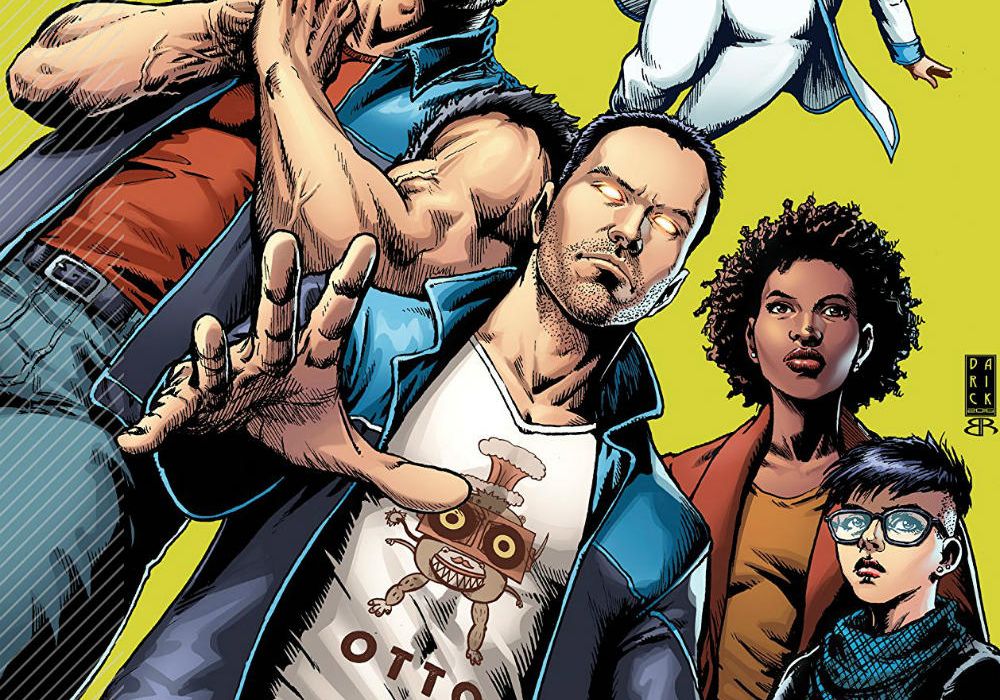 The Renegades are back, even if they don’t want to be. There’s still a Harada mess to clean up, as well as their own. 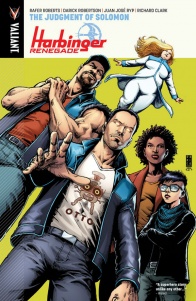 Anyone you know could become a psionically powered “harbinger.” Your neighbor. Your boss. Your best friend. Your kids. Six months ago, a secret team of renegade whistleblowers leaked the existence of these extraordinarily dangerous individuals to a stunned world. Today, all across the country, crude, DIY psiot activation attempts have left hundreds brain-damaged…or worse. The emergence of a new psiot in a community often leads to riots and mass violence. America is terrified of what could happen next. Now, Kris Hathaway, John “Torque” Torkelson, Faith “Zephyr” Herbert, and Peter Stanchek are about to discover their calling. Together, the HARBINGER RENEGADES are moving from town to town, building their ranks, and subverting authority one mind at a time…and setting out to prove once and for all that behind their power, there has always been a purpose. The most fearless superteam in comics is going underground for AN ALL-NEW ONGOING SERIES from rising star Rafer Roberts (Plastic Farm) and acclaimed artists Darick Robertson (Transmetropolitan, The Boys) and Juan José Ryp (Britannia)! Collecting HARBINGER RENEGADE #1-4.

“The jig is up, the news is out/They’ve finally found me/The Renegade who had it made/ Retrieved for a bounty” – Tommy Shaw

“Renegade” lyrics by Tommy Shaw, performed by Styx, is a surprising text to draw on when considering “Harbinger Renegade” Vol. 1: ‘The Judgment of Solomon,’similar titles aside. The lyrical Renegade tries to calm himself and his unseen mother as he contrasts his encroaching, looming, finality with wide open freedom his transgressive lifestyle afforded him. The morality at play in Shaw’s first person narrative points towards an inevitable bad ending, in the form of a short drop and a sudden stop. That kind of fatalism existed as underneath the previous “Harbinger” series written Joshua Dysart that ran from 2012-2014. The Renegades, as Toyo Harada often referred to them, fought a secret war against Harada, his businesses, and secret army of psiots, always escaping by the skin of their teeth. Unlike the song whose narrative, character, and sonic being eventually come to an end; the Renegades of the previous series never the less persist and are forced to do something much harder than die. They must figure out how to live with the consequences of their actions. As Alan Moore was fond to remind readers, these are stories and nothing ever ends.

If jumping into a series that acts as a sequel sounds daunting, there is a two-page graphic summary of the first series by Raul Allen and Patricia Martin that acts as a nice broad stoke introduction to the Harbinger section of the Valiant Universe. With the basic plot illustrated and main cast rendered down to a series of posters. While some of the more personal weight to the introspection in this arc maybe lost for new readers, it still works in the overall framework of the arc as a whole. Just know as summary says “they lost.”

Picking up 6 months after the end of the first series, writer Rafer Roberts shows the Renegades in a surprisingly familiar space. In the previous series, there was an arc in called ‘Perfect Day’ that saw the team share a single subconscious dream space where all their desires came true. Present reality matches and distorts their fantasy. Faith is off being the best, and only true hero in the Valiant U, but is overworked and outgunned. Torque is making Torquehalla a thing having managed to parlay past events into a reality TV series, but for all his material gain is isolated. Peter finally appears to be in a state of serenity, but as issue #2 shows at a heavy cost. Kris is both out of prison and in general, trying to live the normal life with girlfriend Tamara in Los Angeles. Roberts and artist Darick Roberts do a fine job reintroducing the cast in scenarios that have an unfulfilling weight to them despite the best appearances.

Exposing Harada didn’t end things, it may have just gotten more people hurt. With the whistle blown about psiots and a list of potentials floating around all corners of the internet, Mom and Pop, and even more nefarious, activation centers are showing up and people are dying. Artist Darick Robertson, along with inker Richard Clark, and colorist Diego Rodriquez bring a brighter touch to Valiant’s typical humor of excess. Normally this humor was derived from the shocking and sudden appearance of viscera and gore. Robertson’s expressive facial designs bring a new level of sincerity to the proceedings. He’s able to earnestly render a teenage girl’s doe eyed optimism (read: naivete) at being activated, making that excessive, viscera filled, panel punchline of her head exploded hit even harder. No longer the sole shock of the bodies frailty, it is modified with your slight care. The art team have created an overall functional aesthetic. Clark’s inks give everything solid appearance on top of Rodriquez pallet, there is slightly frozen quality to it due to the amount of black at times. They help represent complicated emotion every one of the Renegades feel when they see one another again for the first time.

This arc isn’t about finishing something, but instead reestablishing the dynamics of this motley crew so that something can begin. He forces the emotional heart of the team (Faith) to confront its moral heart (Kris) and reawaken that fiery consciousness. Kris is the only one with something resembling a class and social conscious, the only one who could herd these cats. If any of them were justified in reverting to apathy and “normalcy” it’d be Kris. She’s the one who lost the most, meeting something like the renegade fate at the end of the first series. She was the one who got arrested and lost potentially more than a friend in Charlene. Faith has been doing her best, along with hacker Ax, to stop these ramshackle activation centers, but if it isn’t fly by night operations it’s the government slowly getting in the game. Once she meets an innocent potential psiot named Jay who’s caught between these competing interests, it becomes clear this is a problem of the Renegades creation. One they need to recognize their own culpability in these unintended outcomes. Having the emotional through line of the arc wrest on Kris was a smart move for new and old readers. For new readers, it is clearly established Kris as the “normal one” with a lot of lose. For past readers, we know just how much she already has.

Operating in the shadows, secretly orchestrating this reunion, is former Harada protégée Alexander Solomon. After taking on the omnipotence of Harada, Solomon provides a dangerous new foil. Like Harada he sees his violent, manipulative, means as justifying an end that protects the world from his former boss and bring about a new era of prosperity. His abilities are interesting, he can see the probabilities of multiple futures at once, which provides the excuse for some trippy artistry. Note this contrasts with other precog psiots like the Bleeding Monk or Telic’s foresight, who only see one future. Rafer Roberts with artist Juan Jose Ryp efficiently develop Solomon’s perspective in a series of prologue strips that show why he’s hunted.

The formatting of this trade is odd. Trade paperbacks generally reformat the collected comics into something more novelistic, with extraneous or extra material placed in the back. ‘The Judgment of Solomon’ is literally the first four issue of the series pasted together, which includes issue specific back matter and well as out of date advertisements. Some of that backmatter, such as writing by Rafer Roberts and process art is fine and makes good accompaniment to the requisite cover gallery. For some reason, normal formatting changes were not made and these extras aren’t placed with the cover gallery in the back. This creates a cumbersome separation between issues and unnecessary friction in the reading experience.

“The Judgement of Solomon” is a strong first step by Robertson and the art team, one that looks back and reckons with what came before and use that retrospection to bring potential new readers to this side of the Valiant U.

Final Verdict: 7.5 – ‘The Judgement of Solomon’ is a structurally sound start to the new series that forces the cast to look back at previous mistakes and find the will to keep fighting for what they want.