It’s a who’s who of DC Comics and Riverdale’s elite at the Lodge costume ball, with a few party crashers from Gotham. Put on your dancing shoes and see what trouble our leading ladies get up to next! 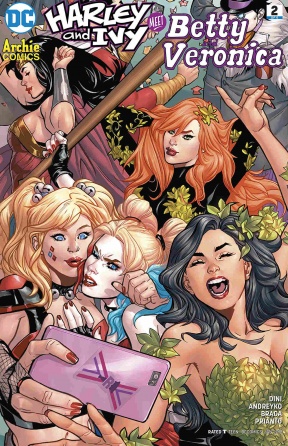 Party time! The Lodge benefit gala is in full swing, but your favorite bad girls from Gotham have crashed the party. When they meet Betty and Veronica…let’s just say great minds think alike when it comes to party attire. Selina Kyle — aka Catwoman — is also on the prowl for Harley and Ivy as they’re wanted back in Gotham. Some magic and mayhem later, the Gotham trio en route back home…or maybe not?

I must start this with a superhero confession: I really don’t read a lot of DC Comics. In fact, this is only the second DC series I picked up (the first being “Bombshells United”). There’s no particular reason I’ve avoided the publisher; I’m certainly a fan of their TV and movie properties. Time to break that habit, and a crossover series that features a “who’s who” of major characters may be the key.

This issue is, focusing mainly on the Lodge soiree, what I will call the “driving on the interstate” story. You need to use the interstate to get from Point A to Point B, but there’s not too much to distract you along the way; you can just drive on without fear of significant distraction. This issue is just that, a fun story that sets the pieces on the chessboard for the next major move, that gets you where you need to be without major diversions. Now, with Riverdale’s top gals dressed exactly like our Gotham girls, you can pretty much assume a switcheroo of some sort is going to happen (and it does), but this is a party so we may as well have fun while doing it.

Like any good TV show looking to impress in the ratings during what we in the United States call “sweeps week,” DC and Archie Comics trot out all the fan favorites: Jughead, Josie and the Pussycats, Selina Kyle, Zatanna, Sabrina Spellman, the Joker, and add in a classic joke or two. Fanservice at its finest. Most are there just to fill time and panels, only Selina plays any integral role in the narrative. She’s come to Riverdale to bring back Harley and Ivy, seems some of the local goons have some unfinished business with them.

Visually, this issue is a feast for the eyes. The party is rich in color, festive and fun. Unlike the first issue that dialed up the color and dialed it down in equal measure, very action has a background that punches it up further: pastel blues and purples for Zatanna and Sabrina working their magic, a cornucopia of green when Ivy launches her attack on Riverdale’s leading ladies. Make sure to have your daily dose of caffeine when reading this issue. Without it you’ll be hard pressed to tell Betty and Veronica in costume apart from the real Harley and Ivy as they look exactly alike. A nice mix of close-ups and wider panoramas adds to the cartoon feel. It’s hard not to visualize this on Cartoon Network’s Adult Swim or as a compliment to the TV series Archer.

I do agree with my colleague John’s assessment from the debut issue on the Riverdale women. They’re drawn to be more adult than their high school ages would purport them to be, no doubt this is due to capitalize on the popularity of the darker, more mature Riverdale TV series. Laura Braga does nail the bombshell aesthetic beautifully, along with great care and attention to detail in close up shots. It’s hard for me to swallow as a feminist, but one does have to suspend a certain amount of reality in this world, so I’ll just add that to the list.

With our Parent Trap-style mixup in place, it’s going to be fun to see what kind of ruin Betty and Veronica bring to Gotham. And what kind of further trouble do Harley and Ivy have for Hiram Lodge and his business plans? Whatever does happen, it’s bound to be a little off-the-wall and full of fantasy and fun.

Final Verdict: 7.7 – Great art and cameo after cameo reminds you that this follow up is purely for fun, so sit back, relax, and have a few laughs!