With a young Harleen Quinzel making her first strides in Gotham, writer Mariko Tamaki and illustrator Steve Pugh craft a compelling take on the rise of one of a character increasingly become a main draw for DC Comics. 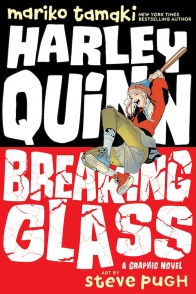 With just five dollars and a knapsack to her name, 15-year-old Harleen Quinzel is sent to live in Gotham City. She’s not worried, though-she’s battled a lot of hard situations as a kid, and knows her determination and outspokenness will carry her through life in the most dangerous city in the world. And when Gotham’s finest drag queen, Mama, takes her in, it seems like Harley has finally found a place to grow into her most “true true” with new best friend Ivy at Gotham High. But when Mama’s drag cabaret becomes the next victim in the wave of gentrification that’s taking over the neighborhood, Harley’s fortune takes another turn.

Now Harleen is mad. In turning her anger into action, she is faced with two choices: join activist Ivy, who’s campaigning to make the neighborhood a better place to live, or team up with her anarchist friend Joker, who plans to take down Gotham one corporation at a time.

From Eisner Award and Caldecott Honor-winning author Mariko Tamaki (This One Summer) and Eisner Award-nominated artist Steve Pugh comes a coming-of-age story about choices, consequences, and how a weird kid from Gotham goes about defining her world for herself.

Readers are greeted with the recurring motif of clowns from the earliest pages of “Harley Quinn: Breaking Glass.” That’s certainly understandable. Harley Quinn will always be synonymous with the Joker, from her simple beginnings on Batman: The Animated Series to her upcoming big screen appearances. Harley will forever be tied to her “Mr. J.” Even though writer Mariko Tamaki takes ample time to build up a young Harleen Quinzel’s pre-Joker backstory, it’s hard not to wonder what would become of a Joker-free Harley tale, especially in an original graphic novel that so adamantly has a refreshing feminist perspective due to Harley’s burgeonning friendship with a high school-age Poison Ivy.

Despite that minor quibble, Tamaki’s script does a fine job of giving a millennial-ready take on a character that has become one of DC’s most recognizable. Harley, retelling the events that preceded her time in jail to her fellow convicts, speaks in the third person, a simple touch that magnifies the goofy, off-the-wall nature of the character. Her narration is in a stream of consciousness style that is wholly Harley, complete with incorrect plot summaries of classic fairy tales that highlight her trademark wacky humor. This leaves Harleen as an entertaining, if unreliable, narrator that adds a sort of endearing charm to “Harley Quinn: Breaking Glass.”

Harley eschews the scantily clad, anatomically baffling outfit that the Joker gifts her for their night of mayhem together towards the end of the story. As a character that has been frequently sexualized over her nearly three decades of existence, it’s a welcomed sign that Tamaki twists the ever-present male gaze that always exists around Harleen on its head in “Harley Quinn: Breaking Glass.” It’s empowering to read a tale where Harley is a well-rounded character who’s her own person and not simply a plaything bending to the Joker’s every whim.

A progessive, female-first attitude sits at the heart of the “Harley Quinn: Breaking Glass,” perfectly illustrated in the relationship between Harley and Ivy. The duo quickly protests the male-dominated film club at their high school, hoping to spotlight directors who are women and people of color. Again, in an original graphic novel that aims to reinterpret these well-established characters for newer, younger audiences, Tamarki presents a story that promotes openness and inclusivity for all, something that has certainly been lacking in the comic book community historically. With more work like this, Tamarki and other creators can work to break down the conventional stereotypes associated with characters like Harley and Ivy, as well as the common perceptions of the comics medium as a whole.

During the brief history of the DC Ink imprint, these young adult original graphic novels have taken great artistic influence from manga. “Harley Quinn: Breaking Glass” does that to some degree here, especially early on, but the artwork becomes increasingly stylized over the course of the story. When readers see a young Harleen Quinzel yet to be corrupted by the temptations of the Joker towards the beginning of the book, those house DC Ink manga and anime-influenced penciling and colouring techniques are on display. As Harley falls from grace and she herself becomes one of the devils she has long detested as “Breaking Glass” churns along, artist Steve Pugh’s illustrations become darker, harsher and bolder, resembling something akin to David Mack’s classic run on “Alias.”

When Harleen’s life becomes increasingly intertwined with the devilish activities of this universe’s Joker, Pugh gets wild with his color palette, as reds and yellows pop off the page as anarchy in a gentrified era of Gotham ensues. This differs from the minimalist shades of blue that are on display early in “Harley Quinn: Breaking Glass,” again, a trademark of DC Ink’s art style. It’s a fresh twist on what could otherwise be seen as a technique growing stale just a handful of original graphic novels into this imprint. Given that Harleen’s complete heel turn towards her Harley Quinn persona coincides with the degradation of her neighborhood at the hands of the rich, corrupt elite of Gotham, it only makes sense that Pugh brings about a more emphatic art style that expresses the gloomy pessimism of her new community.

A clown is a divisive figure. What is at times looked at as this personification of wholesome fun can simultaneously strike fear into people with its creepy outer appearance. Even though the Joker is the clown that is the major focus of Harley Quinn’s life, there’s an element of a clown inside Harley as well. Beyond the drag show-inspired makeup and zany outfits, there is just a young girl driven to commit destructive acts in “Harley Quinn: Breaking Glass.” While there may have been slightly too much attention paid to the Joker throughout this work, the story still stands as engaging look at the youth of the unsung clown in Gotham.