This issue delves further into the past of Harrow County, teasing all kinds of mysteries… 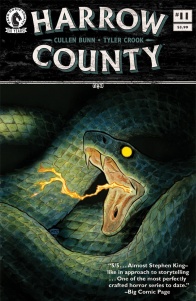 An infestation of insidious serpents has warped the minds of Bernice’s neighbors. Turning to the mysterious Lovey Belfont for aid, Bernice soon learns the dark history surrounding the land on which the Holler rests.

I didn’t talk much about the plot in my last review—I wanted to keep it spoiler free as much as possible—but that will not be the case here. Be warned, here there be spoilers.

What may have appeared to be a side story exploration of Emmy’s best friend is really putting in play some big pieces for the future. Bernice isn’t just Emmy’s best friend, she’s going to be a force to reckon with herself. I’ve no doubt this two-issue arc will have ramifications that will be felt for a very long time in the pages of “Harrow County”.

At the center of this story is the Snake Doctor, Lady Lovey. I don’t think it comes as much of a surprise that she’s a good woman. After all, in the last issue we learned the terrible tales about Lovey must have been manufactured by Hester Beck, and as far as I’m concerned, if Hester is so set on dragging a person’s name through the mud, then that person must be someone worth knowing.

For many years Lady Lovey has stood against the influence of Hester Beck, taking the serpents that infect people’s minds and trapping them in mason jars. Incidentally, we’ve seen one of these serpents before back in issue 4…

I find Lovey’s story an interesting one, not just because it expands the mythology of “Harrow County”, but because of what it says about Bernice. Lovey was trained to become the Snake Doctor because a witch called Odessa sensed her magical potential. And history repeats itself when Lovey decides to train Bernice.

And Bernice clearly has potential. She captures the first serpent with surprising ease, and revels joyfully in her success. “She acted on instinct, her fingers working as if they had performed their task a hundred times before.” There’s clearly more to Bernice.

And yet, earlier in the tale, the narrator pointed out that there would be a price for spying on Lovey that night. At the time, the reader is led to assume Bernice is going to be caught and something horrible is going to happen to her, but upon finishing the story, it seems the price will be shouldering the burden Lovey has carried all these years. Bernice doesn’t seem to mind it too much now—she even seems eager—but I’m sure time will change that.

And there’s another troubling note in this story. Early on in the issue Bernice says, “I don’t know any more about witches than anyone else, and I’d rather keep it that way.” This coming from the girl who is best friends with Emmy, and in fact may have the potential to be a witch of some sort herself. Bernice seems willing to ignore this while there’re snakes to catch, but she won’t be able to remain willingly ignorant if she’s going to become Lovey’s apprentice. And while things seem to be going well with Emmy and Bernice for now, maintaining this ignorance could lead to friction in future.

I haven’t reread the series just yet, so I can’t be sure, but I don’t think we’ve heard of Odessa before. I’m very curious about her, because she seems opposed to Hester, yet also seems kind of creepy. It seems the opossums are her familiars, so when I reread I’ll have to keep an eye open for them…

Daniel Chabon, the series’s editor, mentioned in the letters column that there are many Easter eggs in the early issues, waiting to be be discovered. This is something I like about this series, the way it rewards revisiting previous issues. More than any other arc so far, this one feels more like a chapter in a larger story, and its ending left me eager for the next part. I love that Bernice is getting pulled into this story more and takes up an active role in it. (No surprise there—she is my favorite character after all.)

As always, Tyler Crook’s art is fantastic. I particularly love the panels bathed in black as Bernice and Clinton run through the woods. I would love to see these pages in person someday. And the way he draws Lovey is fantastic, both in the past and present. When we see her in the flashbacks, she’s not just younger, she clearly has a different outlook on the world. She’s terrified by Hester, and helpless. The older Lovey, however, is battle-hardened, fierce, and determined. It’s these details in the art that give her story weight.

For me though, this was an issue driven more by the dialogue and narration than usual. It had a lot to explain in only a few pages, and ended up more talky than usual. There’s a big chunk of the story where Lovey basically sits down and explains things to Bernice. This moment works largely because of the change we witness in the elderly Lovey. Before she’s told her tale, she’s a cantankerous old woman, and after she’s weary. The weight of her duty is written all over her face.

But the thing is, she sits down and talks to Bernice in the middle of the story, and that hurt the pacing and the sense of urgency. I would have liked to have seen a snake-bit Lovey marching through the woods, lecturing Bernice as she tries to patch herself up. That aspect of continuing on when she should be resting and taking care of herself would have reinforced the tension. Plus I would have liked to have seen Lovey’s face when Bernice captures the snake. Bernice feels joy, but Lovey would know better what the girl is getting herself into.

This is a minor quibble in an excellent issue though. Pacing be damned, the flashback sequence was a fascinating glimpse into another time, and a nice companion to the flashback in the previous issue. Lady Lovey is an excellent addition to the cast, and a character I want to see more of. Plus there are so many mysteries to explore.

Final verdict: 9.0 – After every issue of “Harrow County” I’m always eager for the next, but this one more than usual.