After the success of their graphic novel “Feynman,” Jim Otaviani and Leland Myrick have turned their eyes onto a different physicist for their second graphic novel, “Hawking.” Following the life and career of the eponymous Stephen Hawking, “Hawking” tells the story of both Stephen’s life, and the history of cosmology, from his point of view. 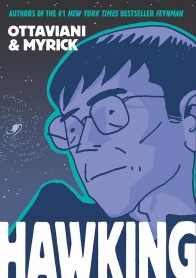 Written by Jim Otaviani
Illustrated by Leland Myrick
Colored by Aron Polk
Following their New York Times-bestselling graphic novel Feynman, Jim Ottaviani and Leland Myrick deliver a gripping biography of Stephen Hawking, one of the most important scientists of our time.

From his early days at the St Albans School and Oxford, Stephen Hawking’s brilliance and good humor were obvious to everyone he met. A lively and popular young man, it’s no surprise that he would later rise to celebrity status.

At twenty-one he was diagnosed with ALS, a degenerative neuromuscular disease. Though the disease weakened his muscles and limited his ability to move and speak, it did nothing to limit his mind. He went on to do groundbreaking work in cosmology and theoretical physics for decades after being told he had only a few years to live. He brought his intimate understanding of the universe to the public in his 1988 bestseller, A Brief History of Time. Soon after, he added pop-culture icon to his accomplishments by playing himself on shows like Star Trek, The Simpsons, and The Big Bang Theory, and becoming an outspoken advocate for disability rights.

In Hawking, writer Jim Ottaviani and artist Leland Myrick have crafted an intricate portrait of the great thinker, the public figure, and the man behind both identities.

When reading narrative nonfiction, I’ve always found that, in my personal tastes, it’s the narrative part of the equation that needs to be stressed. Especially in something like a biography, there is something in the back of my head, no matter how hard I try to suppress it, that reads through this story of a real person and wonders if all the elements are living up to their dramatic potential. Despite what we tell ourselves, people’s lives do not generally work the same way as stories. They aren’t clean, satisfying, or usually even all that dramatically interesting, especially when looked at over the course of a person’s entire life. And yet, with narrative nonfiction, it is the job of the creators to find the through line that takes the many disparate, unconnected threads of human existence, and turn them into a satisfying story.

I don’t know that “Hawking” is able to achieve that goal. While the graphic novel does cover Stephen Hawking’s whole life, it doesn’t do much to dramatize the events therein. There are a few motifs that pop up early in the story and reappear toward the end. But this is a story that is more concerned with the theoretical mathematics of cosmology than it is pretty much anything else. And you (like me) find all of that a bit technical and hard to grasp, then “Hawking” ends up being a somewhat challenging 300 pages.

Interestingly, “Hawking” spends almost as much time being about the history of cosmology as it does being the story of Stephen Hawking. These long interludes, mostly following Einstein and a number of other scientists as discoveries are made, retracted, and pushed passed the known bounds of the universe. In a way, cosmology ends up being the most interesting character in the graphic novel. The way it changes and grows, the way the ground suddenly shifts underneath the scientists working on it. Also, like many of literatures most interesting characters, by the end of the book, I still feel as though I only have the faintest grasp on the inner workings of cosmology, though I’m deeply interested by them.

Unfortunately, when I say that cosmology is the most interesting character, that is because most of the actually human characters feel a bit lacking. It’s difficult, to say that characters come off as uninteresting, when this a story based on real humans and their lives. But there are so many moments where I wish the book has spent less time on diagrams and the esoteric mathematics, and more on the small moments between its main characters that the book quickly glosses over.

Leland Myrick does the most with the small character moments he has to work with. Specifically, the moments between Stephen and his first wife, Jane. The art perfectly captures the strange hesitation in Jane’s caring for Stephen. The awkward moments between them as the drift together and apart. But I wish more of the book has been spent on these character interactions. It seems like there is a whole story to be told about Jane and Stephen, about what happened between them that drove them apart. But “Hawking” has other things on its mind.

The art does do a good job of keeping the book visually interesting throughout. The pages where theorems and equations are presented are always at the very least interesting to look at, though still not always comprehensible. The way that scenes are framed, and the perspective taken for most panels is always interesting. Visually, the book mostly works. It just feels like the focus isn’t always where it should be.

Most of the issues I’ve outlined stem from having Hawking himself as this book’s narrator. From my understanding, much of the book is drawn from his own words. The parts that aren’t are written to match his style. But, because the book has Hawking as its narrator, it is unable to dwell on the moments where Hawking as a person might have been considered to fail. Hawking probably would not want to wallow in the collapse of his first marriage, though it would do quite a bit for the story of “Hawking.”