As major revelations are displayed about Carter, his origins, and his overall mythology, Venditti, Hitch and team once again prove how “Hawkman” is one of the best series published by DC today. 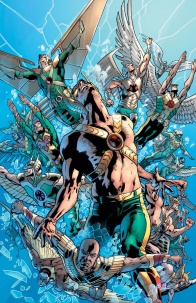 The origin of Hawkman revealed! Rocketing across the cosmos in his newly recovered spaceship, Carter Hall is en route to the next stop on his adventure through time and space. He doesn’t have Netflix to pass the time, but he does have something even better. Locked within the ship’s memory banks is the truth behind Carter Hall’s reincarnation ability, as well as his connection to the Deathbringers-giant, winged beings of immeasurable power on their way to destroy Earth!

Since the beginning of this new volume, “Hawkman” has been walking that razor-thin line between convoluted back-story and rich mythology. For a character so trapped in its confusing continuity and vastness of incarnations, Venditti, Hitch, and team had managed to keep a strong focus on what made the character work, gradually weaving new threads into his tapestry. With this current issue, the creative team not only adds new elements… it changes the entire game board dramatically. There will be no spoilers on this review, but some themes are impossible not to be highlighted, which may cue readers into specific direction this issue goes.

Before all of that, what a treat it is to see Hitch at the top of his game. The artist has been commenting on interviews and social media alike how “Hawkman” is feeling more like a fluid experience, not effortless, but more pleasureful. It most certainly translates into the printed page. There is a sense of motion, of freedom, even on dire situations, that is contagious. Hitch’s Carter Hall is a man of action, powerful, despite his internal struggles.

That is not to say that “Hawkman” #7 is not without its dark and foreboding moments, quite the contrary. If past issues presented dangers in the shape of physical threats, here the script calls for something far more sinister: the depths of madness, of sacrifice. With that, all the gruesome imagery of death, pain and angst are painfully rendered: on the faces of the main characters, on the backgrounds, and on the consequences of actions, small or cosmic. Hitch uses panel layout very effectively, keeping them contained and up close to the nuanced facial expressions, only opening up to reveal the scale of the danger around them.

Skipper’s colors add further layers to the art, and are most noticeable in three situations. The first one, to reflect the dirtiness and grounded feel at the opening of “Hawkman” #7. The second, in an inspired page when the slow passage of time is reflected on a color gradient, at the same time that the main character goes through a change of heart. And the final one, where a chance at new beginnings towards the issue’s end is presented on a deeply bright page, saturated even.

What to say of Hitch’s script without ruining the major surprises contained on “Hawkman” #7? It most certainly reshapes the history of Carter Hall, the true reasons of why he is on the path of death and rebirth, and what threats await him in the future. This is not a mild change, a brush of nuance: this is as large of a reveal as a new origin, as it shakes Hawkman to his core. And yet… it rings true to everything that came before. It does not cast aside any element of existing continuity, nor does it move away from the complexity of the character. Instead, it adds a far-remove vantage point, so that readers can observe that complexity with better hindsight. In making that origin more complex, it actually makes all the stories that came after it more reasonable, logical even. It can, truly, become the new reference point for Hawkman as a character going forward.

In a more intimate analysis, Hitch’s scrip offers candid conversations and world views. Readers get to witness a man change his mind, his soul, and venturing into a new unknown path. The factors that influence his decision – that of a positive, mysterious female figure, and that of a negative, destructive man – are inserted in the plot naturally. It truly is challenging to find where plot and intimate story begin and end, as they both work hand-in-hand to make “Hawkman” #7 special.

As it concludes, this issue leaves its audience grasping for more. What does this new revelation entails in its entirety? What dangers will the next stops on this journey offer? And how does the rest of “Hawkman” mythology is affected and impacted by this new cornerstone? The sense of excitement and possibility at issue’s end is incredible.

Final Verdict : 8.9 – Courageous. Beautiful. Honest. “Hawkman” #7 is what other origin and revelation stories aspire to be. By trusting and believing on its core characters, it allows them to fly further.