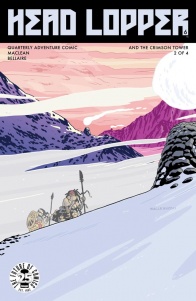 The search for the Crystal Eyes begins. Norgal and Agatha try one door, Zhaania and Xho another. What terrors lie in wait beyond? What traps are set for springing? Only Ulrich the Twice Damned knows for certain. The way forward is unclear but our heroes press on into the strange.

“Head Lopper’s” been a bit of a favorite here at Multiversity Comics since the original self-published story in 2013. If anything, we’ve come to love it more over the years and it’s not hard to see why. This book is crazy good and getting better all the time… and this issue is the best one yet (but I doubt it’ll hold that distinction for long).

For me, a big part of my enjoyment of “Head Lopper” is in watching Andrew MacLean evolve and get confident with his storytelling approach. For example, in the last issue Agatha was riddled with arrows, so in this issue those arrows must be removed, and MacLean revels in all the detail of this: Agatha’s got an arrow that went in the back of her head and out through her mouth, so she can’t talk properly; the arrow also went through her brain, so removing it is going to be uncomfortable. MacLean could have started the issue with Agatha arrowless and ready to go straight away, ready to launch into the next big story point, but instead he pauses on the aftermath. Similarly, he has a moment with Twerpal cleaning up the corpse of his brother Harpo. These are the sort of moments I don’t often see in comics—they routinely happen off-page or between issues—but MacLean’s decompressed approach to storytelling gives them space to exist.

These moments highlight how MacLean can handle both the grim and the comical in close proximity or even at the same time. If you think about it, Norgal and Agatha are the perfect leads for him; they embody so many of the moods MacLean excels at.

OK, let’s talk action. Seemingly no issue of “Head Lopper” is complete without some sort of action set piece—not just an action scene, but an actual set piece. We’re six issues into “Head Lopper” now and one thing has become very clear: MacLean likes to make every fight different. He uses the environment, the oddities of his characters, and the limitations of that particular scenario to make each fight distinct from any past fight. Norgal’s fight with the bird-like creatures is my favorite yet, pitting Norgal against creatures he can’t reach in a situation where he doesn’t have a weapon at hand. (That and the environment design vaguely reminds of Hayao Miyazaki’s Laputa: The Castle in the Sky.)

MacLean’s approach to battles is another area I keep seeing growth. Seemingly he enjoys the challenge of creating distinct battle scenes. It even comes down the color—each battle has a different temperature. I still remember specific action scenes from “The Island” arc by their color, like the pink one from “Head Lopper” #3. (On a related note, if you haven’t seen it yet, Hassan Otsmane-Elhaou has a great video about MacLean’s approach to dynamic movement in action scenes.)

Oh, and then there are the Fongas, the cute little creatures that I’m sure many of us assumed were going to be the comic relief of the series, but ended up going in a dark direction, and seemingly it’ll get darker before the end. Twerpal especially ended up with a much meatier role than I expected, and it’s sort of opened a door in my head for where this series could go in the future. The Isle of Barra, for all its strange monsters was still very much a human world. At the Crimson Tower, we’re getting a taste of other peoples beyond humans, and that’s something I’d really like to see more of. I like the idea of humans only inhabiting their own corner of this world, and there are many other races with corners of their own.

Anyway, my point is, I’m glad MacLean is doing something significant with the Fongas. Twerpal and Bik are an important part of the supporting cast with crucial roles to play. And even though Twerpal isn’t a warrior, I like that he’s still brave and loyal.

I’m going to talk spoilers for a moment. Skip ahead to the verdict if you wish to remain unspoiled.

MacLean is getting better as a storyteller all the time. I remember reading “ApocalyptiGirl” (which is fantastic) and hitting a particular section in which Aria explains for the reader the conflicts of the region she lives in. It was a necessary moment of exposition, but I remember thinking it was the weakest part of the book. Here, MacLean was faced with a similar problem when he has to tell the story of Bone Helm. Just like the “ApocalyptiGirl” moment, it is a very direct moment of exposition, but it works. And I don’t mean in the way where functions smoothly so the reader doesn’t really notice it; this moment deliberately draws attention to itself, and in the process it reveals character in Norgal, Zhaania and Xho. Best of all, it gives the later battle with Bone Helm substantially more weight.

MacLean anchored the Bone Helm story sequence with a few key visuals, a sword, a broken skull, and a flail, and Jordie Bellaire soaked it all in blue. Later, Xho and Zhaania’s journey leads them into the snow, a world of blue. Before we ever see Bone Helm, we are shown a skull, a sword, and a flail. By the time Bone Helm appeared, I had goosebumps. MacLean and Bellaire absolutely nailed this moment.

Before I wrap up, I must mention the format, because I love that MacLean decided to do a quarterly series rather than a monthly series. While each issue is but a part of a larger story, they also feel satisfying on their own; nothing feels crammed in and every character gets their moment. This issue had a major character moment for Zhaania, and yet we don’t get that at the expense of time with Norgal and Agatha. I wish more comics were playing with this format. Not every comic works in the twenty-ish pages monthly format and I’d love to see what other creators could do with it. “Head Lopper” wouldn’t be the same series in the monthly format. As a quarterly series it truly has the room to spread its wings and soar.

Andrew MacLean is definitely a storyteller to watch. Not just because he’s good now, but because he keeps challenging himself and getting better in the process. There’s nothing more exciting to me than watching such inventive creator working on their own projects, where they can do their most unfettered work.

Final Verdict: 9. “Head Lopper” #6 has just about everything I want in a comic. It showcases the best of creator owned comics.

Oh, and in case you didn’t know, Andrew MacLean’s been working with Skelton Crew Studio to put together a 9″ vinyl figure. I believe the bog blue variant is available for pre-order until the end of June. 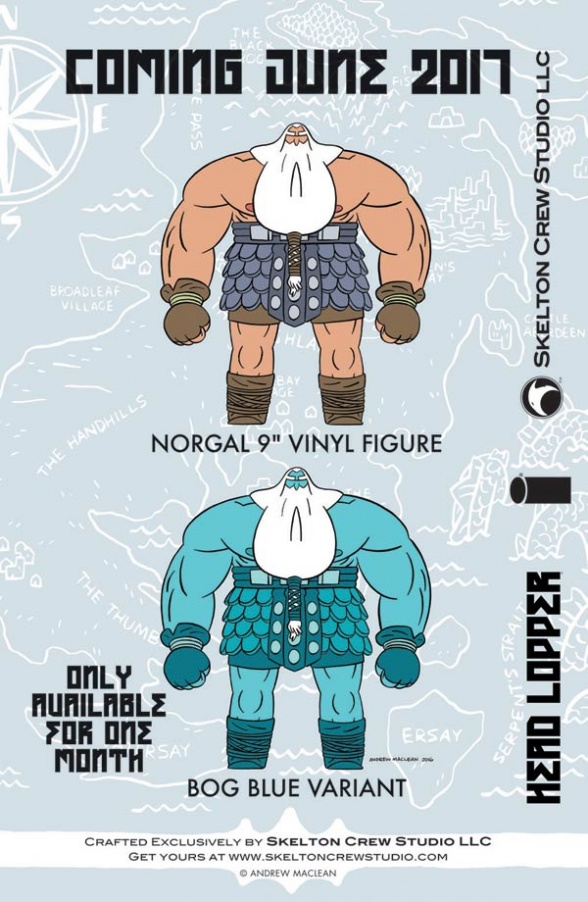