Action packed and loud, full of monsters and witches and evil sorcerers, the collected edition of Andrew MacLean’s “Head Lopper” is here. You want your fantasy adventure fix? Strap in, because this is a book for you. 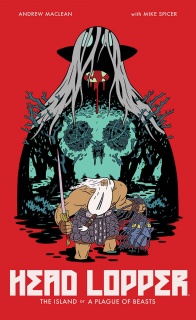 Written by AndrewMacLean
Illustrated by Andrew MacLean and Michael Spicer

The Head Lopper, Norgal, and the nagging severed head of Agatha Blue Witch arrive on the Isle of Barra to find it overrun with beasts: minions of the Sorcerer of the Black Bog. When Queen Abigail hires Norgal and Agatha to slay the Sorcerer, our heroes trek across the island reliving the horrors of their heads-and playing right into the hands of a master manipulator.

In a far off land called Barra, there is a great black bog that contains a great and powerful sorcerer. Years ago, after making a failed bid for power, he was trapped on a small island. Now, with the aid of an evil and manipulative man, he’s suddenly that much closer to breaking free and that tension is starting to be felt across an entire kingdom. This is the land that the famed Head Lopper — son of a Minotaur, who you should probably just call Norgal — enters into. On top of the evil sorcerer, Norgal finds a boy king, a malicious steward, incompetent holy men, and a ton of monsters. We’re talking a metric ton of monsters.

“Head Lopper: The Island or A Plague of Beasts” is an insanely entertaining fantasy adventure comic. Written and illustrated by Andrew MacLean and popping with vibrant colors from Mike Spicer, the book is a sight to behold. Even without MacLean’s complicated plotting and myriad of fascinating characters, the book could succeed on its aesthetics alone. Filled with big images and eccentric designs, it’s easy to get lost in this world.

The book is nearly 300 pages long (with over 200 of them devoted to the main story; the rest are sketches and a series of pinups) and it’s packed to the seams with character and plot. MacLean has a strong instinct for design and has apparently adopted the mantra that the stockier the character, the more enduring they are to watch. Norgal is a huge and imposing figure, and he often goes up against creatures even more enormous and imposing than he. His name might bring with it a sense of infamy, but with all the times he gets tossed around and smashed into the scenery, you start to feel for the guy.

MacLean throws down every manner of monster he can think of onto the page. Sea creatures, restless spirits, this spider demon thing all vye for space in the story. They’re woven mostly well into the main plot and all its machinations. While these encounters with the monsters are finely paced and expertly executed, the sheer amount of stuff going on means MacLean has to neglect other elements. The confrontation between Norgal and the evil steward feels a bit like a letdown — though to be honest, MacLean would have had to pull something cataclysmic to follow everything that happened before. The witch sisters, who may have been my favorite characters, were also somewhat underused for me. They show up, act all menacing, but their arc is resolved almost too neatly.

The biggest reason for splitting hairs about all this, though, is because “Head Lopper: The Island or A Plague of Beasts” does so much so well that the stumbles are far more evident. The art, the humor, the stakes. The atmosphere, the design, the characters. It’s all so cool. MacLean bears a Mignola-Gothic line, but he also keeps the art as clear and open as a frame of animation. His work is expressionistic and lively; it’s difficult not to get caught up in all the excitement. He can deliver pure slapstick (see: anything involving Agatha, the severed blue witch head Norgal constantly lugs around, who serves as the source of contention for all involved parties) to genuine terror (the aforementioned spider demon thing).

Also, having the whole story collected allows for us to fully see the extent of MacLean’s storytelling. The plot features so many interrelated elements that it was easy to forget what happened from chapter to chapter in its original serialization. Not so here. Additionally, MacLean offers some new pages, presented as a new epilogue to wrap up the arcs of some of the other characters. This even provides a more satisfying conclusion from the initial publication, which had sort of abruptly stopped. Maybe MacLean ran out of pages, but this does allow the book more room to breathe.

What “Head Lopper: The Island or A Plague of Beasts” does really well is tell a complete and satisfying story. The arcs all reach a conclusion. Naturally, MacLean leaves the material open for future adventures, but this story has ended and in a format that relies so heavily on cliffhangers and partial narratives, this is a welcome sight.

“Head Lopper: The Island or A Plague of Beasts” is an accomplishment through and through. Packed with a moving, engaging story and delivered through some lively, kinetic art, it’s the kind of book you’ll read again and again simply because it’s so fun. Bring on the next adventure, I say.

Final Verdict: 9.0 – There’s so much to admire in Andrew MacLean’s comic, all the more once we can see the whole thing.