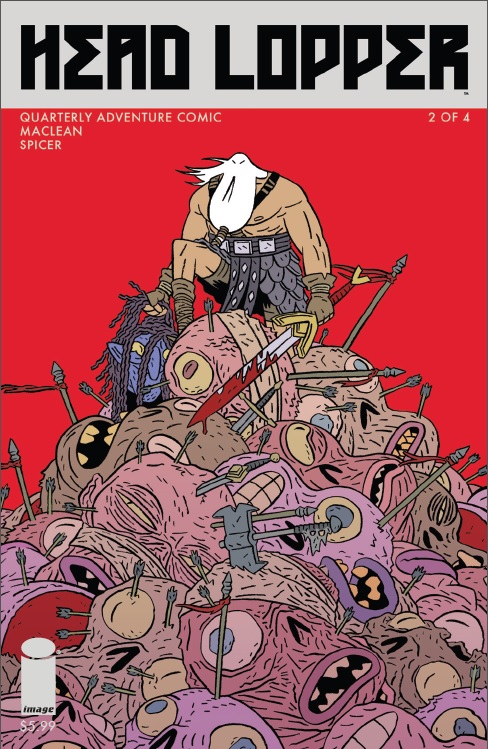 The second issue of MacLean’s quarterly comic returns, and it’s obvious that this book is just as much a labour of love for its author as it is a labour of lopping for its protagonist. 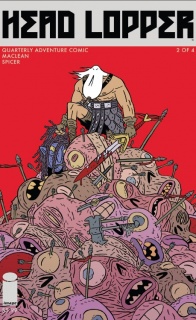 Norgal and Agatha pass through a dark forest with a particularly grim history, where they meet a strange little creature named Gnym. Is he a friend? Or does he just want to see undead giants squish the HEAD LOPPER to meat-jelly? All this… and more!

Three months sounds like a long time, but I could’ve sworn it was only yesterday I was reading the first issue of Andrew MacLean’s tongue-in-cheek, swords-and-sorcery epic. And yet, time marches ever onwards; the nights have drawn in, the bells have started jingling, and, just in time for Christmas, we’ve been gifted with another super-sized issue of “Head Lopper”.

A lot happened in the 90-something pages of MacLean’s first issue. We were introduced to the almost eponymous Nergal (he doesn’t like ‘Head Lopper’) as well as his talkative, decapitated companion, Agatha Blue-Witch. We met Lulach, steward of Barra, as well as the villainous Sorcerer of the Black Bog, and we saw Nergal dispatch half a dozen of his army of beasts with relative ease. It was, in short, a trip.

Issue two picks up pretty much exactly were the first leaves off. After an opening that gives us a bit more of a glimpse into the history of some secondary characters we’re back with Nergal and Agatha as they attempt to traverse the Black Bog and slay the Sorcerer. It’s all beginning to sound more complicated than a DnD manual, but MacLean’s precise and simplistic storytelling makes for a super straightforward narrative. What’s more, the monster mashing that comprises the bulk of this issue is so satisfying that you could easily pick it up and read it without any context whatsoever.

On the surface of things it could be said that MacLean hasn’t left himself much to work with in terms of narrative. His hero is stalwart and true, his villain is so melodramatically obvious he might as well be wearing a black top hat and twirling his moustache, and the hero’s journey was spelled out in the first half of the previous issue. But, once you dig a little deeper, it’s clear that MacLean’s focus is on luxuriating in the tropes of the genre, playing with our expectations. Nergal is on a quest and the extended run-time of this issue allows us to feel the full, sometimes epic, sometimes dull sweep of that burden for him. MacLean’s choice to balance the stoic silence of Nergal against the incessant ramblings of his captive/companion/comic relief Agatha makes for some geniunely hilarious moments. They feel less like a traditional fantasy pairing and more like a misfit buddy cop duo, and the disparate ways they deal with their own near immortality (Nergal begrudingly and Agatha gleefully) make for some truly fantastic action sequences between them and a myriad of monsters.

“Head Lopper” is, as mentioned previously, a quarterly book. This may be primarily a publishing necessity for MacLean (pulling double shifts as both writer and artist can’t be good for deadlines) but it also allows both the artwork and the narrative to breathe in a way that monthlies just can’t do. MacLean’s deceptively complex art style values thick, decisive linework that and a grizzled design style that will be familiar to any fan of Mike Mignola’s work. On first look, his panels often seem sparse and focussed, delivering an immediate impact but, on a second read, there are numerous pages that offer up much more nuanced details that add to the story, most obviously during a tense few pages at the beginning of the issue where Nergal is being followed by a scampering shadowy creature. It’s this kind of depth that makes the release schedule not only justifiable, but almost welcome, even if you need to set yourself a reminder so you don’t forget when the next issue comes out.

While I really do enjoy MacLean’s married-couple-esque scripting of Nergal and Agatha, this issue really finds its feet in silence. There is a section of this book in the middle (as Nergal is set upon by the Black Bog’s beasts of the hour) that runs for almost ten pages with no real dialogue of any kind (except for the awesomely hammy line ‘I need not their lives…only their heads’, which is easily the most badass thing I’ve read in comics in the past six months). MacLean’s ability to pace a battle sequence is preternatural, and Nergal’s detached yet precise manner of despatching his huge, monstrous foes really reminds me of Saitama, the protagonist of the equally hyperbolic “One Punch Man”.

Oddly enough, although perhaps due to the super-max runtime of this first issue, “Head Lopper” #2 does feel comparatively light on story, with much more of a focus being given to Nergal and Agatha than the scheming villains that circle ever closer to them. However I’d much prefer this slightly lackadaisical approach than one that felt needlessly hurried. Given that we’ve already reached the half-way point in this limited issue run, I’m hoping that fan support and sales will persuade Image to open up “Head Lopper” for a more open-ended run. There could be seemingly endless permutations of Nergal’s story and, just like Samurai Jack, “Hellboy”, and other franchises with super stoic leads, I doubt I’d ever tire of seeing Nergal squaring up against an army of endless and terrible monsters and slogging through, though he’s hopelessly outmanned and outgunned.

Final Verdict: 7.4- There’s something smooth and satisfying about MacLean’s work that has me wishing it was March already!