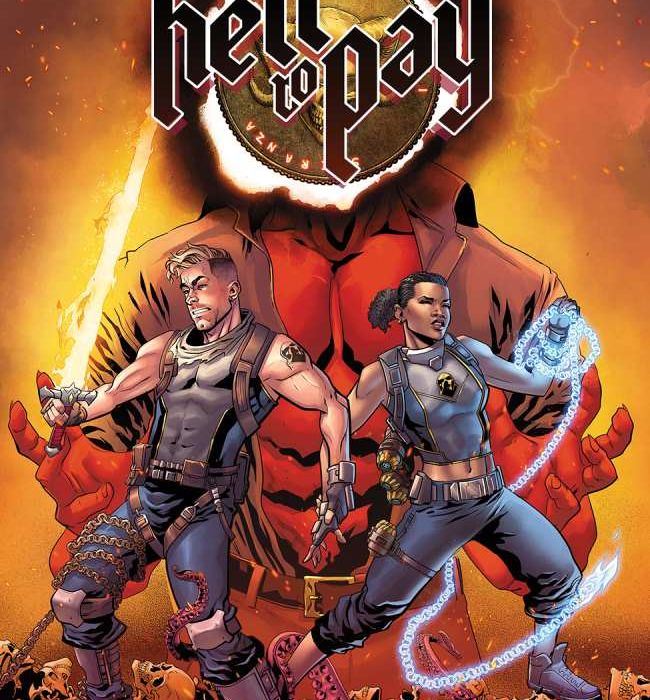 I’m not the biggest fan of stories where people have to go up against demons from hell. Maybe it’s my upbringing, maybe it’s the fact that I grew up in the 90’s and early 2000’s when there were just a whole bunch of cheesy man vs. demon movies that ranged from okay to terrible, but I honestly just find the whole concept a bit silly.

To be fair, if the story or characters are engaging enough (I do love DC’s Constantine) I can appreciate it, but for me these stories have quite an uphill battle ahead of them if they want to impress me.

I’m telling all of you this to let you know that my opinion of this week’s comic is going to be a bit biased, but let’s see if “Hell to Pay” #1 can make the cut. 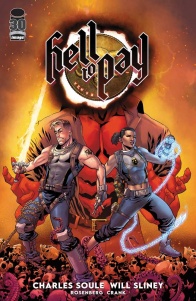 Cover by: Will Sliney
Written by Charles Soule
Illustrated by Will Sliney
Colored by Rachelle Rosenberg
Lettered by Chris Crank
The Shrouded College will give you magic… but you’ll incur a debt. Until it’s paid, you belong to them. Married couple Maia and Sebastian Stone took that deal. They have worked for the College ever since, using their new abilities to track down 666 cursed coins: qurrakh… aka, the Devil’s Dollar. Only a few remain. The Stones are almost free… but the devil’s in the details.

They say money is the root of all evil (fun fact: the actual saying is “the love of money is the root of all evil for anyone who didn’t know) so it would make sense that the pits of Hell would have their own currency. In the language of demons this currency is called qurrakh and it’s used by demons to buy and sell all the wayward and tortured souls that they can afford.

Unfortunately, it seems that some damned soul was actually able to escape from Hell with a bag containing 666 qurrakh and the powers that be would very much like their money back. In order to do that, a secretive group called the Shrouded College has convinced a pair of former soldiers turned lovers named Sebastian and Maia to work for them in retrieving the coins utilizing all sorts of mystic items and weapons. It’s a job they’ve been doing for years and they are so close to completing their goal, only for a new and mysterious player to enter the game and throw a wrench in their plans, presenting a new problem that they have to fix before time runs out.

“Hell to Pay” #1 is written by longtime comic book scribe Charles Soule and while this is not his finest work, it is a solid script with some interesting moments and things to say. Soule’s greatest strength is how he writes his characters, specifically the relationship between Sebastian and Alex. The two mercenaries are the star of the show and they are written to be both incredibly capable at their jobs but incredibly vulnerable at the same time. Yes, they made a literal deal with a proverbial devil, but considering their circumstances before they made said deal, it was entirely understandable. At the same time Soule does a great job of giving Sebastian and Maia’s current predicament a very clear sense of urgency while leaving enough of a mystery for readers to be drawn towards reading the second issue. It’s a story told in the grandest of Mephistophelian traditions, and it will be very interesting to see how they handle it.

Sadly, while Soule has done a great job crafting some great characters and personal moments, the script for “Hell to Pay” #1 does feel a bit flimsy when it comes to the bigger picture. Your mileage on the rest of the script will vary, but any dialogue that isn’t about Sebastian and Maia’s relationship feels very forced and clunky. There’s a very real sense that the exposition is just there for the benefit of the reader and it doesn’t read like normal human dialogue. Plus, outside of the somewhat novel idea of coinage from Hell coming to Earth and a rebellion of tortured souls, the worldbuilding is filled with all sorts of stuff that we’ve seen dozens of times. There isn’t a whole lot of effort to make the actual Hell different or interesting, it’s just the same place for bad people it’s always been.

If the writing for “Hell to Pay” #1 is light on worldbuilding but great on the details, the artwork by Will Sliney has the completely opposite problem. While the book doesn’t have much of anything new to say about the realm of Hell and its demons it certainly looks interesting. Sliney gives the pits of hell a very imposing look with tons of Gothic architecture and it’s clear that a lot of thought and time went into the design for the demons because they are unique and legitimately scary. It is entirely believable that these demons are the servants of evil and would not hesitate to rip you to shreds if you made them angry. It’s an effective aesthetic that is scary, but light on the blood and gore.

The sad thing is, while the backgrounds and non-human life forms look great, the actual humans look stiff and awkward. A lot of the static poses feel very unnatural and when Sliney zooms in for a close up, the character’s faces feel rushed and a bit off. The artwork is redeemed a bit during the action scenes which are clear, crisp, and dynamic, but there is a very real sense that a book with a creative team this well known could certainly look better.

“Hell to Pay” #1 is a book that’s good enough, but not good enough to be impressive and stand out from the thousands of other stories about humans and demons. There are a few good ideas and the main characters have great chemistry which might be enough for some people, but it could be a lot better.

Final Verdict: 6.4- It has some great moments and isn’t offensively bad, but it doesn’t do much to separate itself from the hoards of similar deal with the devil stories.