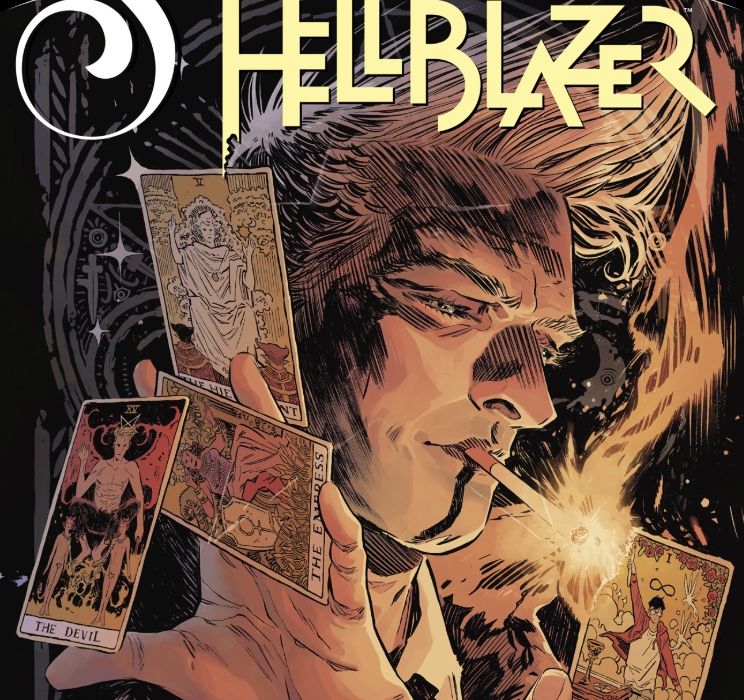 “The Sandman Universe Presents: Hellblazer Special” #1 (hereafter “Hellblazer” #1) picks up where we last left John: neck-deep in a crisis, wounded, questioning reality and, as always, with an absolutely top-notch attitude. Warning: spoilers ahead. 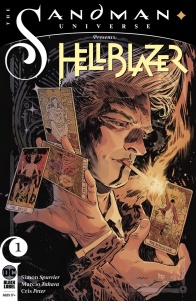 Cover by Bilquis Evely & Mat Lopes
Written by Simon Spurrier
Illustrated by Marcio Takara
Colored by Cris Peter
Lettered by Aditya Bidikar The second year of the Sandman Universe begins with the long-awaited arrival of one of DC’s most iconic characters…John Constantine, Hellblazer! He’s cheated death and damnation more times than he can count, but never like this. Long ago, in the crucible of a magical war waged across countless futures, Constantine was murdered by an all-powerful adversary: a twisted version of Timothy Hunter, bloated with evil.

“Hellblazer” #1 takes John out of the tightest spot he’s ever been in and drops him right into 2019 Brexit-Era London to start over. Kind of. Now that Constantine (and others) are running around the DCU at large, it’s a little difficult to keep track of the man in between all the cursing, cigarettes, judgment and bad decisions. Spurrier and Takara solve this pretty neatly by picking up the story where Neil Gaiman left it: Tim Hunter’s gone totally barmy and John’s got consequences on his hands. But then, when does he not?

Spurrier and Takara nail the chain-smoking, foul-mouthed magician from the first. Takara picks lean, stringy and spare lines and is liberal with shadows. There are a few moments later in the book when the inks become a bit much, but Takara never strays too far from the haunted and jagged edges that make John so compelling as a protagonist. As for the dialogue, Spurrier’s off from the first page with pitch-perfect narration, quips, meanderings and curses. We’re dropped right into chaos and find our way out as John does, with magic and weirdness around the edges. Spurrier keeps the plot humming along with a surprise at almost every page turn and a good deal of emotional baggage. Constantine’s a winsome lad underneath the bluster and chronic disasters, but that doesn’t always mean he’s the most compassionate guy, and Spurrier nails that complex balance to make it seem like we’re along for the ride with our old friend no matter how bumpy it gets.

Takara’s art is beautiful and weird, with a lot of original and disturbing background creatures in the miasma and a more subtle weirdness during the more haunted moments. This is also one of those comics where it’s almost impossible to talk about the artwork and color palette separately, because Peter’s work makes everything in the book just a bit more special. Constantine’s introduced in massive shadow with a Michael Allred-esque cartoonish profile that slowly gives way to the rumpled, squinting tosser plopped in the midst of total insanity. Takara’s initial page is set off beautifully by the orange glow of John’s cigarette against the purple drama of the dim light around him. As we pull away from the mysterious figure, Peter introduces diagonal washes of peach, green and red with some subtler, picked-out details that contribute to the bleed of craziness that Spurrier’s narration hints at. The splash on the page turn is dazzling because of Takara’s imagination and because of the sheer scale of Peter’s colors and textures. Takara’s jagged silhouettes are each picked out in a unique color, and sweeps of light, explosions and a miasmic, sick rainbow background spattered with dots and outer space-like gradients all slam home how far away from reality we truly are.

Takara and Peter’s synergy also comes through in the subtler creep factor of the current day. John’s dropped off in our very own messed-up 2019, and Spurrier puts him through the wringer with an emotional confrontation decades in the making. Takara’s spirits are peaky, jagged apparitions that Peter paints out in a subdued, swirling mass of blacks and blues. They mass around John and make him appear small as he’s raked over the coals by his oldest – and only – stalwart friend. People around John tend to suffer. A lot. Peter keeps the lavender walls and tone of John’s skin just a touch warm to offset the blue that threatens to engulf him, and as he turns his head away at the bottom of one page it’s an excellent, tense beat thanks to the palette.

Bidikar’s an excellent letterer with a good deal of imagination and flair, and it’s always nice to see his work on a book that’s liberal with dialogue and narration. Spurrier gives Bidikar a lot of work to do, and he does it very well. Narrative boxes are the perfect shade of innocuous peach that blends with Peter’s varied palette, and Bidikar adds a very subtle drawn stroke on the balloons to help them integrate with Takara’s angular line. The font is nice and blocky and there’s not much space between each line, which helps with real estate in such a complex and talky book. The font is also a nice throwback to Annie Halfacree’s original lettering in the early “Hellblazer” issues while maintaining the crispness we need to get through the dialogue and narration at a steady clip.

There are moments where Bidikar’s style comes through, however. The spirits all speak in different voices, with distinct, jarring fonts, colors and balloon styles, and there’s a conversation between John and his doctor that sports a box and unique font within the balloons. Each moment adds a touch more drama to the story, and all of Bidikar’s work on this issue is a nice nod what made “Hellblazer” and its peers so special.

Overall, “Hellblazer” #1 is a successful dive back into Constantine’s murky and troubled depths. There’s a lot more that’s great about this book than what’s noted here, but you’ll just have to read it to figure out what’s going on with the old gent, what happens to Chas and how John’s going to navigate this Brave New World – trenchcoat, ciggie and all.

Final Verdict: 8.5 – “Hellblazer” #1 features Spurrier at his sharpest, dazzling visuals from Takara and Peter and excellent lettering from Bidikar.