Hellboy enters his junior year as a B.P.R.D. agent in “Black Sun”. 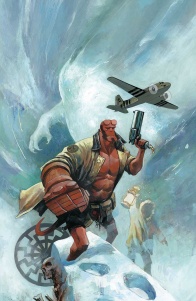 When an unknown creature attacks a research group on an Arctic expedition, Hellboy and the BPRD are sent to investigate. No longer the newbie, Hellboy thinks he can solve the mystery immediately, but what they find in the snow reveals something much bigger behind the beast.

One element of “Hellboy and the B.P.R.D.” I’ve particularly enjoyed has been watching Hellboy grow into the role of B.P.R.D. agent. In “1952” he was timid, always walking a step behind, eager to do the right thing, but also worried about messing up. In “1953” he was discovering he was actually pretty good at the job. Now we’re in “1953” and Hellboy’s become a bit cocky; he thinks he knows what’s what.

Oh, Hellboy. So much to learn…

Chris Roberson is back on writing duties, settling into this series long term. Given how much I’ve been enjoying his work lately, I couldn’t be happier. He has a strong sense of Mignola’s world, but like Arcudi, he’s capable of growing it into new territory.

In this case, he’s pushing new aspects of Hellboy and introducing a new B.P.R.D. agent, Woodrow Farrier. I don’t want to say too much about Woodrow, because I want you to meet him on the page. I’ll certainly take a moment to talk about him when I review issue #2. But I will say it’s nice that the Bureau agents in this series matter. The old “Hellboy” flashback stories from the 1990s and early 2000s had Hellboyfront and center—the BPRD agents serviced a particular plot device, but other than that, their presence was usually perfunctory. However, the B.P.R.D. agents component of the “Hellboy and the B.P.R.D.” impact the story, they interact with Hellboy, they matter.

I’m one of those readers that liked when “B.P.R.D. Hell on Earth” took time to explore its regular agents (especially agents Strode and Howards, who ended up being fundamentally changed by their adventures), so it’s important to me that the B.P.R.D. agents don’t feel like filler characters, but rather supporting characters that could potentially become lead characters in future arcs. Woodrow certainly has that potential.

The art on this issue is by newcomer Stephen Green, a former student of Sean Gordon Murphy. We’ll be seeing more from Green in the future too, as the letters column confirms he’s already got another Mignola project lined up for him. And I can see why. He brings a youthful energy to Hellboy without it feeling out of character. He’s a perfect match for story with a younger Hellboy.

At the same time, I feel like it’s the second issue where we’ll really get to see what Green can do. We get little glimpses here of a monster and some machinery, and it’s clear immediately that they are the sort of thing he likes to draw. Those elements are restrained to the latter half of the story and are used in a limited capacity, setting up something much bigger for the next issue.

This series has been really good at casting its artists for stories, and Stephen Green is no exception, however I must admit, I’m kind of hoping one or two of them stick around for more than a single arc. Lately it seems all the Mignola series are shifting away from having an ongoing artist, and while that can be fun, there’s something special about having an artist develop the visual language of a series. This was something I really enjoyed about “Abe Sapien” and with that series now ended, I don’t see anything on the horizon in this universe where I can get that fix, except for Tonci Zonjic on “Lobster Johnson” and Laurence Campbell (assuming he sticks around for “B.P.R.D.’s” next cycle. I certainly hope so).

This is my long-winded way of saying Green fits and I’m cautiously optimistic that we’ll not only be seeing a lot more from him in future, but I’m also hoping we’ll see his energies focused on developing a single title. As Sean Gordon Murphy’s quote in the letters column said, ‘Stephen is a perfect fit for “Hellboy.” He’ll be the next big thing at Dark Horse, mark my words.’

As for the story itself, it summoned up memories of John Carpenter’s The Thing to them point that I’m sure it must’ve been an influence. For those of you that know the significance of the title, “Black Sun,” you’ll know where this story is going straight away, but for those readers that don’t know, I’ll stay silent on that topic.

I can see how the next issue is going to be a completely different animal than the first though. This was restrained for the most part. It’s more about getting to know Woodrow and Hellboy than it is about monster hunting.

This month’s been excellent for the Hellboy line of books, and this issue is no exception, but it’s probably the least surprising, so it’s eclipsed a bit by everything else. At the same time, with all the other titles being larger arcs, a smaller two-issue story is a nice change of pace, even if the stakes aren’t as high.

Final verdict: 7.5. This is a strong foundation for the next part, but overall it’s a quiet issue focused on building characters.