A young and relatively inexperienced Hellboy learns a few lessons while beating up Nazis. 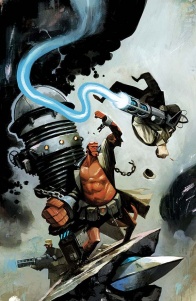 Separated from the rest of the BPRD, Hellboy finds himself in the company of a familiar enemy with a new weapon—and plans to test it out on Hellboy.

As this is the second and final part of this story, I’m going to be launching into spoilers right away.

There’s a few stories in the Hellboy Universe that seem to delight in setting up one type of story and then veering hard into something else altogether. My favorite example of this is “Hellboy: Dr. Carp’s Experiment.” In this short story, Hellboy is investigating a haunted house, so the first half of the story is very atmospheric, building up a creepy mood, setting up a particular expectation… which gets utterly obliterated in the second half when Hellboy gets transported back in time to fight a demon monkey. It’s fantastically weird.

This is essentially the same concept at work in “Black Sun,” except spread over a two-issue miniseries, where the first half is moody and the second half is a little more bizarre. It’s not as effective as “Dr. Carp’s Experiment” however. There are moments when it dives fully into the grand craziness the situation demands, such as the opening fight sequence in the Nazi saucer hanger, but it’s held back in the middle by some heavy exposition.

This is where I’m of two minds, because the exposition in this sequence was interesting stuff, but it didn’t feel earned. We have a Nazi called Eckhart that initially refuses to talk to Hellboy because ‘one rarely feels the need to engage with a laboratory rat before it goes beneath the knife,’ and then goes on a six-page rant.

The thing is, Eckhart has a lot to explain. I mean, there’s been references to the Sonnenrad Society in past stories, though I don’t think it has ever been named explicitly, and Chris Roberson goes to great trouble to make sure readers don’t confuse the Sonnenrad Society with Project Ragna Rok or Herman von Klempt’s group (which is pretty important considering a significant portion of “Hellboy and the B.P.R.D.” readers have are likely unfamiliar with the decade-or-more-old stories that involved these other factions).

Then Eckhart goes on to explain the charter of the Sonnenrad Society, what they had found, how they studied it, what they learned, what they wanted to do, what they needed, how they could get it… and at a certain point it became too much.

It doesn’t help that Hellboy is restrained and uninterested. His goal throughout the scene is essentially to weather Eckhart’s prattling and drop the occasional insult. So the scene ends up resting almost entirely on Eckhart. Artist Stephen Green certainly makes the most of the grandstanding Eckhart, pushing the character to extremes, highlighting the arrogant and ridiculous nature of the character.

Everything before and after the Eckhart rant scene works wonderfully well though. The opening scene, with Hellboy fighting the Nazis in the hanger, was just what I was hoping for from the issue. The way Green drew the blasts from the Nazi accelerator weapons looked fantastic, like barely controlled chaos. The sequence had terrific energy.

And the scene with Hellboy blowing up the Nazi base was a nice, humorous moment. But it was the last three pages I loved the most.

Hellboy had been incredibly cocky throughout this story, and I was greatly amused to see Hellboy sitting dejectedly in the snow, waiting for rescue. This was further ramped up when we discover he’s been waiting for six weeks on the other side of the planet.

There’s been a few stories in the past where an bizarre explanation is dropped on the last page, my favorite example being in “Hellboy: The Hydra and the Lion.” Again, this is an info dump, but it’s played for comedic effect and kept relatively short, so it works.

A big joy in this story was seeing Stephen Green go big and totally nail it. For a story full of Nazis, flying saucers, and mutant polar bears, he’s definitely the guy for the job. I was already excited to see his next story, “Lobster Johnson: Garden of Bones,” in January, but now I’m even more so.

There’s one other element I need to talk about in this story, and that’s all the big mythology stuff Roberson brings into play. Clearly, he loves the mythology of this universe, because most of his stories are heavy with it. This one heavily references “Rise of the Black Flame,” and even goes so far as to give the black flame a name, Shakti, and explicitly state it is a kind of opposite force to Vril. And I bet it’ll heavily link in with the recently announced “Visitor” miniseries too.

This is all stuff I really enjoy, but in this case, I think the setup for other stories overwhelms the needs of this story. The issue is really at its best when its focus is on the story at hand.

Final verdict: 7. Overall this was an enjoyable issue, with a strong start and finish, even if it sags a bit in the middle.