Last month’s issue was definitely the calm before the storm. I’m still kind of reeling after “Hellboy and the B.P.R.D.: 1956” #4. This is an issue that ups the ante more than any from the series in recent memory. 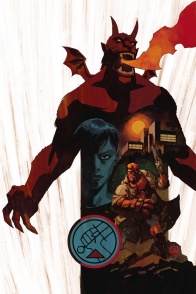 Bruttenholm’s secret investigation comes to an abrupt and tragic end, and Hellboy’s absence forces him to send B.P.R.D. agents to search for him in Mexico. Meanwhile, the conflict between Soviet occult team leader Varvara and her subordinates comes to a head!

This issue gets spoilery right on page one, so I’m going to drop a major spoiler warning right here.

I knew something bad was going to happen to Jacob Stegner going into this issue—the writing was very much on the wall in the previous one—but I’d been hoping it’d be an injury, not death. I’m very sorry to lose him. He was a rich character, not just in isolation, but in how he interacted with others. Stegner always brought something different to a scene and out of his fellow agents, especially Trevor Bruttenholm.

But something had to give. ‘1956’ is very much a turning point for “Hellboy and the B.P.R.D.” The Bureau has been lagging behind the S.S.S., S.I.D., and C.D.R.D., and for it to become the organization we know in modern day, it needs to evolve and fast. In ‘1952’ to ‘1955,’ the Bureau’s been coasting, getting by on a lot of goodwill from Bruttenholm’s former war compatriots in the S.I.D. and from Varvara’s protectiveness from the S.S.S.

Those protective barriers are torn down here. Varvara’s gone, the S.I.D. has crossed a major line, and the C.D.R.D. is bound to identify Stegner’s body—they’ll know that B.P.R.D. knows more than they should. Most worrisome of all, Bruttenholm has severely compromised the trust his colleagues put in him. Margaret’s had good reason to doubt Bruttenholm’s professionalism since “B.P.R.D.: 1947,” and I think we’re going to see that affect Archie and even Hellboy too.

Myron’s role in this story comes into sharp focus here. He now knows there’s some sort of relationship between Bruttenholm and Varvara, and you can bet he’s going to be suspicious of Bruttenholm being a Communist.

Obviously, we know the Bureau is going to emerge on the other side of this stronger than ever, and whatever rift forms between Susan and Bruttenholm, we know the two will be in each other’s confidence again by Christmas 1961 (see ‘God Rest Ye Merry’)—still, I’m fascinated by this transformation. Mike Mignola and Chris Roberson know that the Bureau has to undergo changes to make it to the 1960s, and it would’ve been easy to make this transformation all about external pressures (governments, secret organizations, etc.), but instead the catalyst for this change is coming from character relationships, which is something far more interesting to me.

I especially loved the way ‘1956’ tackled Varvara’s imprisonment. We always knew what was going to happen and how it was going to play out, so it was a masterful stroke to make this moment about Bruttenholm. If Varvara hadn’t been there to protect Bruttenholm in this issue’s opening scene, he would’ve died. Sticking this rescue scene just before Varvara’s imprisonment recontextualizes this moment so that now it’s not just about her, but also about how vulnerable Bruttenholm and the Bureau is without her. Dr. Raissa Boim, Father Malakim, and Chairman Skuratov are all compelling as unknowns. We don’t know what any of them are capable of or what danger they pose to the Bureau. All we know is that they’re good enough to incapacitate Varvara.

Yet again, Michael Avon Oeming’s work in this issue ends up being the showpiece of the issue. It’s big and dramatic, and utterly enjoyable. Considering this sequence is already so familiar to readers of “B.P.R.D.: Hell on Earth—A Cold Day in Hell,” this new element was just what the book needed. It deftly avoided a “going through the motions” feel, without changing the scene itself. It happens exaclty as we’d seen previously, but it’s power comes from its context in this story.

As for that opening sequence with Stegner’s death, I find myself rather surprised by how I felt reading it. After all, a major character just died, and that’s upsetting… and yet Varvara shows up and burns Roland Childe alive, and that’s very satisfying. Childe was such an incredible bastard, and as evil as Varvara can be, this scene is a excellent demonstration of why we love her. Still, when a major character that I care about dies, it’s strange to come out of that scene thinking, “That was awesome.” The weight of Stegner’s death hits much harder when Bruttenholm has to tell Margaret and Archie about it in the latter half of the issue.

This is where Mike Norton’s work shines. His plotlines in ‘1956’ have the biggest emotional range, and he takes all that in his stride. He totally sells Bruttenholm’s initial shock, grief, then anger by the end of the issue. And given the recent announcement of “Hellboy vs. Lobster Johnson: The Ring of Death,” I can’t wait to see what he does next. The little pieces we see of Hellboy wrestling feel like teasers for the upcoming one-shot.

As I mentioned in the last issue’s review, Yishan Li’s scenes with Susan tend to get overshadowed. Susan’s plot has much lower stakes than everything around it, so Li’s restraint is necessary. It shouldn’t be vying for prominence. Working within this restraint, Li still finds interesting things to do in a scene that’s really just a conversation. This isn’t just talking heads in panel reverse panel layout. Midway through the conversation, Susan gets up and starts talking with her back to Myron. She’s literally talking to her reflection, a visual representation that she’s not really thinking about Myron being there, she’s just talking aloud to herself. And in the panels with Myron, virtually every one has him with his pen or notepad visible. Those panels didn’t have to be framed this way, but by doing this Li makes it clear that this is a conversation that extends beyond just Susan and Myron. Everything said here will go back to Myron’s superiors. None of this storytelling is in the dialogue. It’s all in the body language and panel composition.

“Hellboy and the B.P.R.D.: 1956” #4 covers a lot in its twenty-two pages, and each of its three artists brings something different to the issue, and yet the issue’s primary strength is in its overall cohesion. The further we get into this arc, the more I’m impressed with how well the three artists were cast for their roles. It’s especially satisfying to see the long-form story threads come together, becoming something stronger than the sum of their parts.

Final verdict: 9 – “Hellboy and the B.P.R.D.: 1956” #4 doesn’t just lay groundwork for exciting future issues, it’s an excellent issue in its own right.