“1955” comes to a close with a one-shot from Chris Roberson and Paolo and Joe Rivera. 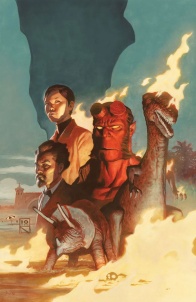 Hellboy investigates a rash of spontaneous human combustions in a Florida town unlike any supernatural phenomena he’s seen before—and the fire has an appetite for Bureau agents.

Mark Tweedale: Of all the series in the Hellboy Universe, “Hellboy and the B.P.R.D.” seems to be the one I routinely struggle with. On paper, it sounds like a great idea—classic Hellboy stories with a band of B.P.R.D. agents—and yet here we are four volumes into the series and it still seems to be struggling to find its footing. Don’t get me wrong, I enjoy the series, but it can be pretty shaky at times. I’ve mentioned before it seems to alternate back and forth between strong and weak arcs. The previous arc, “Occult Intelligence,” while doing a lot of heavy lifting in terms of giving the overall series a direction, ultimately fell into the latter category. And like clockwork, ‘Burning Season’ falls into the former.

Professor Bruttenholm, Susan Xiang, and Hellboy are our investigators this time around, and I think these three are a big part of why I enjoyed ‘Burning Season.’ Each one contributes something to the investigation, something that only they could bring. Does this arc move the big plots of “Hellboy and the B.P.R.D.” forward? Not really, but it moves the characters forward.

I also think Susan and especially Bruttenholm lend themselves to Chris Roberson’s writing style. His work is often dialogue heavy, and when you’ve got a psychic that’s experiencing things no one else can see, it makes sense for her to tell the others what’s going on; when you’ve got Professor Bruttenholm on the scene, he draws on a wealth of knowledge the other characters don’t have access to. ‘Burning Season’ compliments Roberson’s writing well.

Christopher Lewis: Something I said in the last “Hellboy and the B.P.R.D.” review we did was that I have enjoyed each of Chris Roberson’s one-shot stories in this series, but his multi-issue story arcs have fallen short. This statement still holds true for me because I liked this issue. The plot was straightforward, allowed the characters to shine, had great pacing, etc. The best part is exactly what you said about the dialogue, it was paired perfectly with each character’s talents.

Mark: Also, like with Brian Churilla’s issues, there’s an extra pleasure in having a returning artist on the series. For me, the ‘Beyond the Fences’ arc was when the character Susan Xiang came to life, so there’s an extra spark in this issue seeing Paolo Rivera drawing her again.

I also think Rivera’s got a knack for taking very un-Mignola-like locations, such as suburban California or Florida, and making them work, which for both ‘Beyond the Fences’ and ‘Burning Season’ is an essential part of the atmosphere.

Chris: Agreed. Did you know that Port Orange is a real town in Florida with a dinosaur park that closed in the 1950s called Bongoland? It also had a sugar mill.

If you do an internet search of the location, you will see photos of the park and sugar mill that line-up exactly with Rivera’s art of the foliage, buildings, dinosaurs, etc. I find it amazing that Chris Roberson used a real place as the setting for ‘Burning Season,’ and even more amazing that Rivera depicted the location perfectly as seen in the online photos. I personally love this, and find that this makes the story more tangible and real for me. 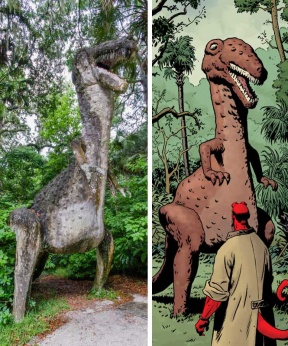 A Bongoland Dinosaur
Mark: I hadn’t picked up that. Back in our end of year interviews, Roberson talked about this issue:

“I asked [Rivera] what he wanted to draw, and he gave me a short list that included a particular location that was not far from where he lives and that he visits often. So I researched the history of the location and discovered that a lot of interesting stuff had happened there, with a lot of story potential.”

I’d assumed the location was inspired by something real, but ultimately a fictionalized version of it for the Hellboy Universe. It’s pretty cool that the location was directly referenced. It adds to the larger themes of the issue, which we can’t talk about without wandering into spoiler territory, so consider this your warning. Roberson and Rivera are referencing the real history of the Seminole and Timucua peoples, using ‘Burning Season’ as a tool to acknowledge real atrocities.

This was the beating heart of this story, and it’s what made it work for me. Up until the last few pages, I felt like we were given all this backstory, and I didn’t see how it could be satisfyingly addressed in a single issue. But Roberson pulled it off.

I’m very glad this wasn’t a vengeful spirit, as I think this would’ve been a disservice to the real people harmed by these historical atrocities. The idea that the place itself is scarred was much more interesting. And I like what ‘Burning Season’ does with Hellboy in the face of this problem. He can’t punch his way out of this one, which is something I feel like he’s been relying on too much in previous arcs. Seeing Hellboy solve this problem with empathy is much more compelling, and feels much more true to the character. This was a major evolution in his development as a B.P.R.D. agent.

Chris: The place was scarred, and all of that death, destruction and fire had manifested itself into a twisted tree. I thought using the tree to be the visual manifestation of the historical atrocities was clever (especially since it is a real tree in Port Orange). Also, they did a good job of foreshadowing the significance of the tree at the beginning of the story where Hellboy touched the tree saying “The heck…?”

Mark: That’s cool. Do you want to grade this one?

Chris: I am going to have to give this one a 8. The characters played to each other’s strengths and I love that the story had a connection to a real place. Also, Rivera did a great job depicting Port Orange and setting the tone for the issue.

Mark: It’s an 8.5 from me. All round it was great, but that ending, where Roberson nailed a core element of Hellboy’s character, elevated the issue.