If you’re craving a classic “Hellboy” one-shot after the end of the universe-changing “B.P.R.D.: The Devil You Know,” then “Hellboy and the B.P.R.D.: Long Night at Goloski Station” is exactly what you need. It strikes an excellent balance between being both familiar and new—surprising, considering it’s the debut of artist Matt Smith in the Hellboy Universe, but he’s such a natural fit that his art can feel familiar even though we’ve never seen him in the pages of “Hellboy” before. Read on for our spoiler-free review. 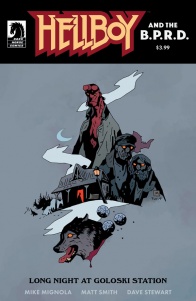 A quiet night at a rundown Russian train station turns into an all-out demon battle for Hellboy when three sinister interlopers pass through.

I’m not exactly sure what I first saw of Matt Smith’s work, whether it was this Hellboy fanart or “Lake of Fire,” his miniseries with Nathan Fairbairn. Either way, I was immediately convinced he could draw a killer “Hellboy” story, so you can imagine how happy I was when ‘Long Night at Goloski Station’ was announced. Just as I suspected, this is a fantastic issue. Matt Smith indeed is a perfect fit for a “Hellboy” story.

The year is 1967, only three years after Hellboy infamously shot out the Baba Yaga’s eye, and unsurprisingly, it seems she holds a bit of a grudge against Hellboy for this. This’ll all be very familiar to long-time “Hellboy” readers who’ve seen the full extent of this grudge in the ‘Darkness Calls’ miniseries. ‘Long Night at Goloski Station’ explores this a little more, making it clear that Koshchei was far from the first sent after Hellboy to claim his eye.

It’s a strong set-up, immediately making this more personal than Hellboy’s usual one-shot investigations, and yet it retains that quality of Mignola’s best one-shots in that it’s completely accessible to new readers. This could be anyone’s first “Hellboy” story without any problems.

‘Long Night at Goloski Station’ may be a long night for Hellboy, but for us readers, the pacing is perfect. Mignola balances the action with stories within stories and some excellent little character moments. One of my favorite beats was Hellboy sitting and chatting with another character while they wait for a train—it’s hardly a show-stopping moment and there’re bits of it that could’ve been cut out, but the conversation adds a level of moral complexity to everything that follows that I found deeply satisfying. There’s a focus on building theme, not just plot.

Despite being a standalone work, there’re plenty of connections to the broader Hellboy Universe too. There are references to Sir Edward and the Ripper which could’ve easily felt like a nested commercial since “Witchfinder: The Reign of Darkness” is coming out next month, but instead the link builds the mythology in a natural way and heightens ‘Long Night at Goloski Station.’ Context matters, and something that could seem crass in a lesser writer’s hands feels like a masterful embellishment from Mignola.

‘Long Night at Goloski Station’ also includes a link to the one-shot “Hellboy: In the Chapel of Moloch” with Zrinyi’s buttons. This is a link that’s not at all necessary, but ‘Long Night at Goloski Station’ would certainly be lesser without it. The buttons are not just a link to another story, but a vessel for a marvelously dynamic action sequence, and even a playful reversal—we’ve seen Hellboy’s explanation of the buttons already. . .

From “Hellboy: In the Chapel of Moloch,” art by Mike Mignola

. . .and there’s something amusing about seeing how someone else would explain the same thing. Without saying too much, let’s just say it’s an effective bit of character contrast. We don’t need to know how Hellboy got Zrinyi’s buttons, but their inclusion doesn’t derail the story and adds texture to the tone, mythology, and characters.

Smith is an incredibly natural fit for the Hellboy Universe and for a “Hellboy” story in particular. I’m reminded a little of the shorts Mignola did with Ben Stenbeck for “Hellboy and the B.P.R.D.: 1953”—the collaboration is that seamless. If you’re familiar with Smith’s work, it’ll come as no surprise that he knows how to compose an action sequence. There’s parallel action in this story, and thanks to Smith’s composition and Dave Stewart’s colors, it’s an effortless read.

Speaking of Stewart’s colors, ‘Long Night at Goloski Station’ is an explosive issue. Starting with cool blues with low contrast, journeying to fiery oranges against black, and finally settling on peaceful coral colors—the issue has a very definite shape, and Stewart transitions from each of its disparate sequences smoothly. As usual, he makes it look easy.

Given my review of Hellboy: 25 Years of Covers earlier this year, I obviously love Mignola’s covers (I mean, who wouldn’t?), but his cover for ‘Long Night at Goloski Station’ is exceptional even for him. He manages to distill the most iconic elements of the story into a montage that feels unified. I love that he can stick a beheaded wolf on the cover, and yet still our eyes are drawn to a shadowy figure in a doorway. . . the perfect visual element to set up a question in the viewer’s mind. And this highlights how much he trusts Stewart to bring his work to life—this cover is composed with the color in mind, relying on it to deliver the focal point.

Final verdict: 9 – First ‘The Beast of Vargu,’ now ‘Long Night at Goloski Station’—2019’s been a great year for one-shots from Mike Mignola. Both stories set a very high bar for December’s ‘The Seven Wives Club’ with Adam Hughes.