“Hellboy and the B.P.R.D.” returns with “Occult Intelligence,” and returning with it, “Ghost Moon” artist Brian Churilla. 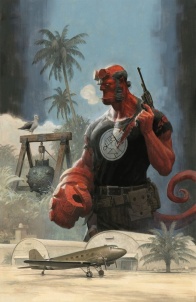 A layover on a remote island drops Hellboy into a web of intrigue involving government secrets and foreign agents waging their own cold war over a weapon that might be right up the BPRD’s alley. In England Bruttenholm uncovers more secrets, indicating a worldwide supernatural conflict about to boil over.

Christopher Lewis: I am happy to see that the whole gang is back for “Occult Intelligence.” When reading these stories certain characters get me more excited than others, however when Stegner, Archie and Hellboy get together it is always something special. Maybe because they have all been together since Hellboy was a kid. In this issue they are on a mission in the South Pacific and it feels right.

Mark Tweedale: Yeah, it’s always good to have the team together again, and not just the cast. This issue marks the first time we have a returning artist on the book. Each arc up to this point has had a different artist, which left the series is in a constant state of reintroducing itself. Having Brian Churilla back on the book makes it feel a like we’re moving into a new phase. That and we’re getting some long-running plots start to develop, most notably exploring the other occult agencies in the world.

I’m pretty curious about this, because I’d always assumed the B.P.R.D. was a joint US–UK organization, but clearly that’s not the case here. It seems the Bureau was founded as a US organization and gained UK funding and support later. At this point in time, the UK has the Special Intelligence Directorate (S.I.D.) and we’ll also be seeing a bit of the Soviet Union’s Special Sciences Service (S.S.S.). Chris Roberson’s mentioned an ‘Occult Cold War’ in interviews, a long-running storyline that will span several years in the comics.

Chris: There has been foreshadowing of a larger storyline since Roberson first came onto this book with the “Beyond the Fences.” In that arc Roberson touched on two Russian characters, Rahel and Valentin, who are S.S.S. trying to steal Enkeladite from the US. Also, in “Ghost Moon” the S.I.D. was glimpsed and there were references made to these same two Russian characters. Overall “Occult Intelligence” seems to be bringing together all of the little pieces we have seen in the previous issues for the start of Roberson’s big storyline. It’s nice to see everything come to fruition.

Mark: I do have a bit of concern with the visual continuity as the series develops into long-running plotlines. I’ve mentioned before the problem with the flexible faces of the supporting cast and it comes up here again with Woodrow. Honestly, if I hadn’t been told it was Woodrow, I never would have guessed. He’s still black and male, but beyond that there’s not much resemblance to his appearance in “Black Sun” and “Secret Nature.” It’s most obvious when you compare profiles of the character.

Considering Woodrow is also modeled off a real person, I find this drift in his appearance especially baffling. I know the art on this title has been in the hands of a different artist each time, which has caused a number of visual continuity problems, but we’re on the fourth book now. It’s really time these problems were addressed, because it creates a major stumbling block for engaging with the characters. The artists need model sheets for each character to keep noses, cheekbones, lips, jawlines, hairlines, and all the other details that make a face unique in check. They did this for “B.P.R.D. Hell on Earth” and, while there was some variation between artists, I never had trouble picking who was who. (The exception being James Harren’s Carla Giarocco in “The Long Death,” but that was before they started using model sheets). Even minor supporting characters jumped out immediately as being the same person without relying on dialogue cues to tell us. 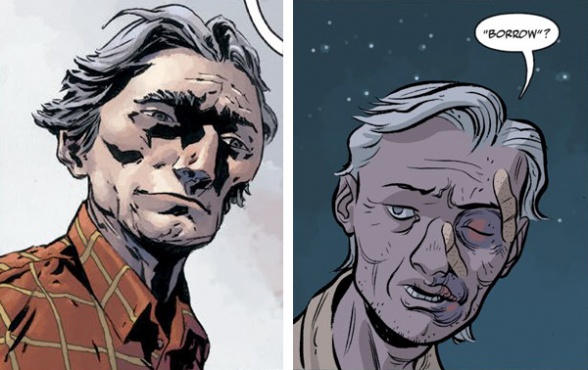 Chris: I noticed the same thing about Woodrow’s appearance (or Woody as Hellboy calls him). That being said, from a character perspective I was surprised at how Woody came off underutilized and as a peripheral character here. In the previous issue “Secret Nature” we saw Hellboy and Woody bonding in the Northwest, and that story gave a lot of context and depth to Woody’s character. Because of that, the transition between this and the last issue came off rough for me.

Mark: Yeah, I think this problem was more pronounced coming off of “Secret Nature.” Shawn Martinbrough’s take on the character was perfect and the script gave him plenty to work with. And that was something that got me a little irritated right from the beginning—Woodrow finally saw a cryptozoological animal (a bunyip from Australia) and it happened off panel as a single line of dialogue! I felt robbed of a character moment I’d been anticipating.

That and Hellboy is back in human boots again, which is weird. I’m hoping this is the last arc we see those.

Chris: Agreed. Outside of what we just discussed, I did enjoy Churilla’s art. He has an amazing style where the depth of field is always in the foreground and the backgrounds are simple with little detail, progressively out of focus, and/or just empty. This approach allows for easy focus on action in the foreground and is visually stunning. Also, Dave Stewart compliments Churilla’s art perfectly using simpler color schemes to fill the background and empty space. 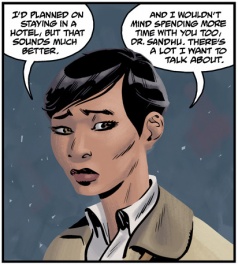 One other thing I noticed was that in a couple of panels Stewart used color on color with no defined line art to separate characters in the foreground with the background. When I first saw these panels I was taken out of the story because my eye kept involuntarily being pulled to the lack of a defined border around the character. However, the more I looked at the art, the more I started to see this technique as a simpler approach to coloring the empty background and could work because it matches the feel of Churilla’s style (similar to what I said previously). Of course the next time I looked at the art I reverted back to my initial assessment and vice versa. Therefore I don’t know if this works or not, which by itself, at the very least, makes it more distracting than complimenting. Did you notice anything with these panels?

Mark: For me this approach to coloring seems to be an an artifact of Churilla’s linework and Stewart’s approach to backgrounds. I mean, if you can imagine the artwork as its original linework version, the spot of color behind Susan would have been solid black and merged in with her ink outline (I assume). So, Stewart has a few options: leave the spot behind as black, which could work, but if he does this all the time, it limits his control over a scene’s palette; color the spot and create linework as he separates the black spot into color and line, which could slow down coloring and potentially step on the artist’s toes; or color as he has, where the line vanishes in the areas it makes contact with the spot color. The drawback with this last approach is that it makes a panel jump out from the others on the page. Sometimes that works to powerful effect, such as in “Ghost Moon” in the fight against the demons, where the lighting seemed so intense it had consumed some of the linework. 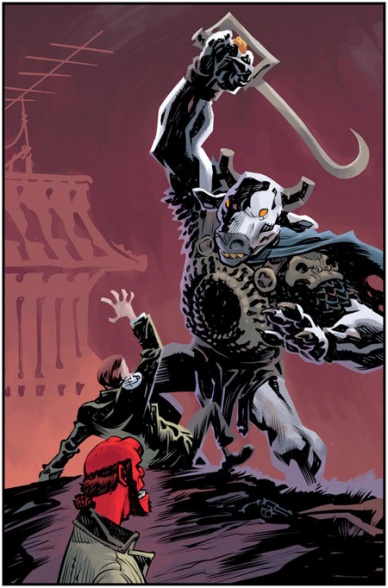 But in “Occult Intelligence,” when it’s used in panels of small character moments, I feel like this approach distracts from the focus of the panel, which I feel should be the character’s eyes. I’m noticing the art style more than the character’s emotion. Because this only affects the occasional panel, I don’t tune it out, so it draws my attention every time I come across it, so I expect it to serve some story or character purpose.

Chris: I never thought of it from that perspective. I am sure the more we see Churilla as the artist on “Hellboy and the B.P.R.D.” the more this coloring technique will be used, and I will continue to evaluate it each time.

Mark: Since we’re talking about design work, I want to mention Churilla’s design of the monster in this arc. I won’t say too much about it, since we’ll certainly be talking about it in the review for the next issue and I don’t want to spoil the reveal, but it got me excited to see what else Churilla can do in this world.

That and I’m looking forward to seeing what he does with Susan in this arc. I think he’s got a good sense of her character. We only gets hints of something in this issue, but it seems she’ll be primary driving force in the UK plotline.

Chris: I am sure the UK plotline will become more prominent in the next issue, and yeah… that monster was fantastic. Let’s grade this one. I am going to give this the issue a 7. It’s a good start to the “Occult Intelligence” arc, but some of the visuals and rough flow from the previous issue held it back.

Mark: Yeah, this was a rocky transition coming off of “Secret Nature.” I liked Woodrow’s development in that arc, and this opening diminished what that issue accomplished. “Occult Intelligence” #1 has promising set-up for this arc, but I’m not going to get my hopes up too much after the repeated misfires in “1954.” The real draw for me here is Brian Churilla, partially because it’s great to have a somewhat ongoing artist, but also because I think he clicks with certain aspects of Mignola’s world really well. I’m giving this a 7 too.

Final verdict: 7 – A promising start to a new arc, but with some problematic character continuity issues. Hopefully “Hellboy and the B.P.R.D.” can tighten things up going forward.