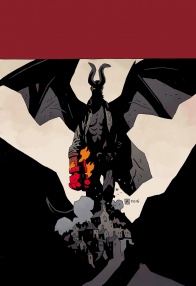 Hellboy transforms into what he was always meant to be.

I don’t think this is going to be much of a review. Given the circumstances, it feels more like therapy. We all knew the ending was coming, but can you ever really prepare for something like this?

OK, I’m dropping the spoiler warning right up front. I’m going to ramble my way through everything.

The way “Hellboy in Hell” was originally designed, it was supposed to start with a big four-part story that wrapped up enough plot threads so that Hellboy would essentially be free to wander around Hell having odd adventures. The series was made so that this wandering could continue indefinitely. Reading “Hellboy in Hell” #5 and #6, it’s easy to imagine what that would have been like.

Of course, the plan changed and the series shortened so that it ends here, at issue 10. What I find interesting about this is how Mignola retroactively altered the structure of his series. These seeming one-off tales that fall in the middle of the story become essential. It reminds me of how “The Corpse” was originally an inconsequential story, but as the series progressed it became absolutely essential reading.

Both #5 and #6 introduced core concepts about life and death and the nature of the soul in Hell, elements that are essential to understanding this ending. Really, this ending is a natural progression of those concepts. Everything must end, there is hope even in Hell.

In a way, we already said goodbye to Hellboy, though we didn’t know it. In the previous issue, ‘The Spanish Bride’, we had a rare moment where we were privy to Hellboy’s inner thoughts, something that’s rather rare in the series. And it really spells out why this series must end: his life in Hell is meaningless. He’s not living and he’s not free. He’s in limbo, stuck in the same place as the world changes around him. Hell, Mignola even went so far as to pin him to a tree to show how trapped he was. Even his last words were talking about being trapped.

‘For Whom the Bell Tolls’ is the opposite of the previous issue. Where we had been close before, now we are distant. We simply bear witness.

I’m not entirely sure of what was going on here. That’s not a criticism either. If anything it’s a compliment. Like many moments of Hellboy’s story, there’s ambiguity there. I have my own interpretation of these events, but since I literally just read the issue an hour ago, they’re hardly very studied. This isn’t the sort of book you put down and you’re done with it. You’re going to be thinking about it after you finish, and you’re going to have a tangle of emotions to deal with.

I didn’t actually have time to write this interview today. I wasn’t supposed to. But if I’m going to get my other work done, I have to deal with some of what I’ve read. Like I said earlier, this is not really a review. It’s therapy. Or perhaps an emotional exorcism.

In “Hellboy in Hell” #4, Sir Edward Grey spoke about a picture hanging on his wall, Death Riding an Elephant by Walter Edmond Heap. In the trade collection we learned a little more about Mr. Heap. He was not a very successful painter, and was better remembered as the author of a series of books about “a small mechanical head”. The implication is that Screw-On Head exists within the Hellboy Universe, but as fiction.

By extension this could be applied to the other stories in “The Amazing Screw-On Head and Other Curious Objects”, in particular “The Magician and the Snake”. This story is referenced a couple of times throughout “Hellboy in Hell”. My interpretation of this is that the story is a parable known to Hellboy, and the references to it in Hell is a manifestation of themes contained within the story. It’s visual iconography for a certain concept: finality.

The Magician and the Snake statue appears in issue 5 at the place where Captain Dulot dies. He walks by it earlier in the issue, and then at the end of the issue, his corpse is found lying at its base. So in this issue, as Hellboy walked through the empty city of Hell and the statue appeared conspicuously in a panel, I knew what to expect. Even still, seeing those geometric shapes waiting for Hellboy was a punch to the gut.

The Hellboy Universe will go on, but I don’t think we’ll ever see Mignola draw a “Hellboy” story again.

Two of my all-time favorite “Hellboy” arcs are ‘The Third Wish’ and ‘The Island’. The former because of its ending with all those souls flying free, the latter because of its opening with Hellboy wandering alone in emptiness, utterly adrift from the world. The final pages evoke those scenes again, while adding the symbolism of “The Magician and Snake” in there for good measure, taking it to a level beyond any of these stories.

In short, this ending ruined me. It was hauntingly beautiful, devastatingly melancholy, and surprisingly heartfelt. It hurts to see Hellboy go, but it’s glorious to see him find a home.

Final verdict: I never thought I’d give any story a 10, but I couldn’t in good conscience give this anything less. This is a masterpiece.