The “Hellboy in Hell” structure makes it hard to hit any sort of rhythm with the series, since its release schedule is so erratic. So having two issues drop in consecutive months has been a pleasant surprise – add to that the fact that this is, perhaps, the most plot-driven story we’ve seen so far in the book, and this issue feels a lot like old Hellboy comics. That is a very, very good thing.

Be warned that spoilers will be discussed. 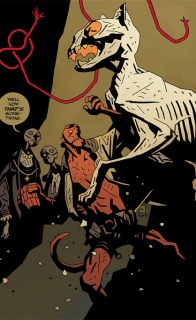 Written and Illustrated by Mike Mignola

His family will be his death!

The Hounds of Pluto Part 2 of 2

A mummified cat, a trial in Hell, and a horrible family reunion stand in the way of Hellboy’s search for a cure.

I always find it strange when creators decide that it is time to re-tell a character’s origin – I’m not talking about “Superman: Birthright” situation, either. In this issue, Mike Mignola, essentially, gives readers a dime store version of Hellboy’s story thus far, from birth to descent into hell, in 3 pages. Sure, many of the readers of this issue haven’t been on board from the beginning, but I think most understand what is going on in the book, and have some understanding of what Hellboy’s story is.

This, please note, is not a criticism of that technique. In fact, I found it to be an endearing part of the story, and not just because we got Mignola drawing Abe, Liz, and Kate for the first time in a very long time. To hear Red talk about his friends and his ‘good job,’ it gives readers a nice reminder of what a Hellboy story was like before things took a turn for the surreal. Mignola’s hell is one of the most interesting settings in all of comics, and I love how nothing is how it appears, and yet it is just as haunting as the more traditional interpretations of hell.

Each installment, I find a new feature in Mignola’s hell to latch on to and enjoy – this month, it is Dr. Hoffman’s home, which has this staircase in it: 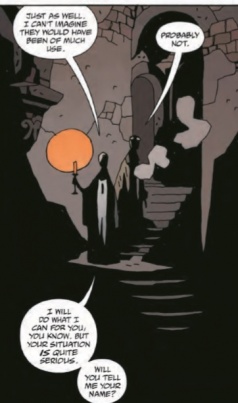 This staircase is half taken from the 1931 Dracula film and the 1932 Frankenstein – it is part castle and part laboratory, which is to say, it is the perfect amalgamation of the Universal Horror aesthetic. Like Mignola, I grew up adoring classic horror films, and seeing panels like this remind me why Mignola’s work is so special – he is truly making comics for himself, and refining his approach so wonderfully as he goes.

This issue has a number of panels that only Mignola could have drawn – geometric shapes that take 2-3 glances to understand what Mignola is drawing in the most minimal way possible, scenes that would be complex in anyone else’s control that appear as smooth and simple as can be, but also some real old fashioned Hellboying. And not just in the flashbacks.

The opening of this issue is Hellboy fighting in a way we haven’t seen since he entered Hell. And, somehow, when fighting, he’s bright red and bulked up again – it is as if the fight makes him live again. When the battle ends, he is back to gaunt, grey Red. I know that this isn’t the first time in this series that Mignola and Dave Stewart have messed with Hellboy’s look – Hell isn’t a physical realm the way that Earth is, so everything shifts and adjusts constantly.

Stewart’s work, as always, is utterly sublime here, and he perfectly matches the reds of blood and fire to the decaying grey of the streets of Hell to make a setting that feels both dangerous and unpredictable. The sequence at the end of the book where Pandemonium falls, which is gorgeously illustrated by Mignola, feels so much more finite due to Stewart’s subtle changing of the color palette panel to panel.

This issue, between revisiting the past, revealing the truth about Hellboy’s connection with his uncle’s death to Gamori, and seeing Red ‘alive’ and fighting again, led to this being one of my favorite issues of the book thus far. As much as I love the surreal and uncompromising nature of the past issues, this managed to have its cake and eat it, too – there was still lots of beautifully fucked up imagery, but there was also forward momentum. The idea that Gamori was going to snuff out the heart of Hell is an incredibly powerful one, and one that will have serious consequences on the book.

Both the most and least interesting thing about Hellboy is his destiny – it is the sword of Damocles that hangs over the entire Mignolaverse. On one hand, we are all waiting for that story to be told; on the other, that story being told will bring an end to all of this. So, while I cannot wait to see how that, eventually, wraps up, I am very glad to have Mignola telling such amazing tales of Red while he can, before we all find out just how incorruptible his destiny really is.