Since its debut in 2016, the “Hellboy Winter Special” has become an annual tradition for Mike Mignola’s Hellboy Universe. We’ve had specials before, like 1997’s “Hellboy Christmas Special,” but they’ve all been one-offs. However, the “Hellboy Winter Special” looks like it’s here to stay, and we here at Multiversity Comics couldn’t be happier about that. Short stories are an integral part of the Hellboy Universe, and it’s good to know they’ll have a regular comic to call home for the foreseeable future. 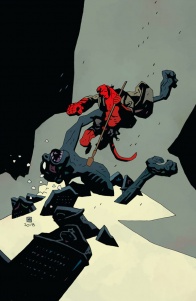 Christopher Lewis: There is something magical that happens when Mike Mignola and Ben Stenbeck come together to create a “Hellboy” story set in the past. The last time was earlier this year with “Hellboy: Return of the Lambton Worm,” which was set in 1960s England, and before that it was four stand-alone shorts for “Hellboy and the B.P.R.D.: 1953” with Hellboy and Professor Bruttenholm investigating paranormal happenings in England. With each of these stories the creative team knocked it out of the park and gave us stories that truly felt like early Mignola tales from the late 1990s.

‘Happy New Year, Ava Galluci,’ continues that trend with another amazing story (again set in England!) that has the same charm as those older “Hellboy” stories. In fact it reminds me of a mix between ‘King Vold’ and ‘The Whittier Legacy’ in the sense that Hellboy outright says the séance is a mistake early on and ultimately has to handle the situation that unfolds because nobody heeded his warning.

While the writing is impressive, it is Ben Stenbeck and Dave Stewart who steal the show. From the very beginning Stenbeck sets an eerie tone for the séance by presenting each panel with a pulled back frame showing Hellboy and others huddled in the center of a giant room with significant black shadows surrounding them. This type of positioning and shadow gives the sense of isolation and fear to the group, while also foreshadowing that something could be lurking in the dark. Additionally, as the séance starts the panels continuously move closer and closer to each character’s face heightening the tension until we reach the climax of the story.

Meanwhile, Stewart is enhancing the sinister tone by using muted colors for the house, backgrounds, and people’s clothing. In fact only minimal vibrant colors are used in order to punctuate and anchor the supernatural aspect of the story (red for Hellboy and green for the demon imp), and denote the pitch of sounds as colored words are spelled out in panels to express background noises. Bright yellows for the ‘bongs’ visually express the loudness of the noise, while pastel purple words subtly pop giving the feeling of softer minute sounds for creaks and cracks.

Overall I really enjoyed this new “Hellboy” story. It reminds me why I first fell in love with the character. I truly hope these “Hellboy” shorts by Mignola and Stenbeck become a tradition and we see a lot more of them in the future. 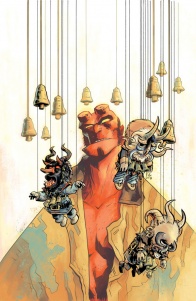 Brian Salvatore: It’s been a minute since we last saw Fábio Moon and Gabriel Bá tell a Simon Anders story, but from the first panel of this story, it feels like old times again. Much like how “B.P.R.D. Vampire” began in the woods, so does ‘Lost Ones,’ and we are back in the twins’ fiefdom inside the Mignolaverse. Except, instead of “Hecate” being uttered, “Blein” is being chanted as we catch up to the subjects of this story.

Moon and Bá, both working on the art for this story, work some wonderful misdirection into the start of the story, showing us creatures that appear mystical, but turn out to be nothing but folks in costume, and then show us normal looking animals, that turn out to be quite more than that. It isn’t until about halfway through that Anders shows up, riding a bear like a boss. It is a perfect reintroduction to the character, although it is also bittersweet, as who knows when we’ll see him again.

In that same vein, the story does a nice job keeping the story contained, but gives a connection to Hellboy and Professor Bruttenholm that reminds us of where and how this corner fits into the rest of the Mignolaverse. I know the Twins are incredibly busy, but I’d be satisfied if they did a story like this every year until they can carve out time to tell a longer Simon Anders story. I hope that, unlike Cameron Stewart with Ashley Strode, Anders stays the sole property of the Twins.

One of the key elements of their initial miniseries was Dave Stewart’s masterful use of red, using it sparingly, but incredibly powerfully, throughout the story. The same thing happens here, with nary a red hue to be found until we see Simon’s eyes glowing. Stewart and Clem Robins have the wonderful ability to take any story and ground it firmly in the Mignolaverse with their unique touches, and this story follows suit. Even though we don’t get a truly familiar character until the penultimate page, there’s no denying the tether to the rest of Mignola’s work. 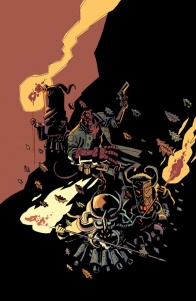 Mark Tweedale: ‘The Empty Chair’ is Tonci Zonjic’s first writing credit on a Hellboy Universe title, though you’d never know it. He’s been drawing “Lobster Johnson” since 2012’s ‘The Burning Hand’, so he’s had considerable experience with this world and its characters, and it shows in every panel of this story. This is also the first “Lobster Johnson” since 2012’s ‘Tony Masso’s Finest Hour,’ which hasn’t been written by John Arcudi, and yet it fits extremely comfortably next to Arcudi’s stories.

He’s got only six pages to tell this story, the shortest of the three in this issue, and yet he’s able to use our familiarity with the Lobster to make it feel just as long as the others. Zonjic suggests moments and we fill them in without even realising it. When I began this review, I flipped back through it surprised to find that moments I thought were there actually weren’t. ‘The Empty Chair’ could’ve easily been a half issue or even one-shot, but it’s condensed in such a way that it loses none of its punch or charm in only six pages. Yes, it’s a quick read, but it feels full.

The ending (which I won’t spoil, don’t worry) punctuates the story perfectly. It’s not just how it ends, but how Zonjic chooses to portray that ending. The panel layouts are very specific and very satisfying. You’ll see what I mean when you read it.

There is a rather odd detail worth noting—‘The Empty Chair’ is set in 1930, yet in Hellboy: The Companion and “The True History of Lobster Johnson,” the Lobster was active from February 1932 to December 1938. That’s not to say the Lobster wasn’t active before then, but February 1932 was when the first corpse with the Lobster’s claw brand on it showed up. Clearly that’s not the case here, as the Lobster not only brands numerous gangsters that are a big part of the Lobster Johnson legend (Vinny the String, Skinny Joe Lincoln, and Zuco Banana are so notorious, they’re still remembered seventy years later in “Hellboy: Conqueror Worm”), but he’s already well known for his brand. This subtle retcon opens up not only the early 1930s, but perhaps even the late 1920s to more “Lobster Johnson” stories. As far as I know, this doesn’t contradict anything in comics themselves—1932 simply becomes the year that Cindy Tynan started publishing articles about the Lobster.

If you read ‘The Pirate’s Ghost’ and saw that 1936 date and felt a little down that “Lobster Johnson” was probably winding down with 1938 on the horizon, it seems the series has more gas in the tank than we thought. (And we still haven’t even seen the Lobster go to Chicago yet!)

So let’s ring in the new year with a toast: to more “Lobster Johnson!” 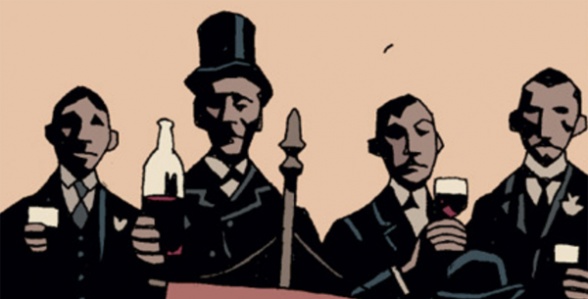 Final verdict: 9 – This is probably the best “Hellboy Winter Special” yet.