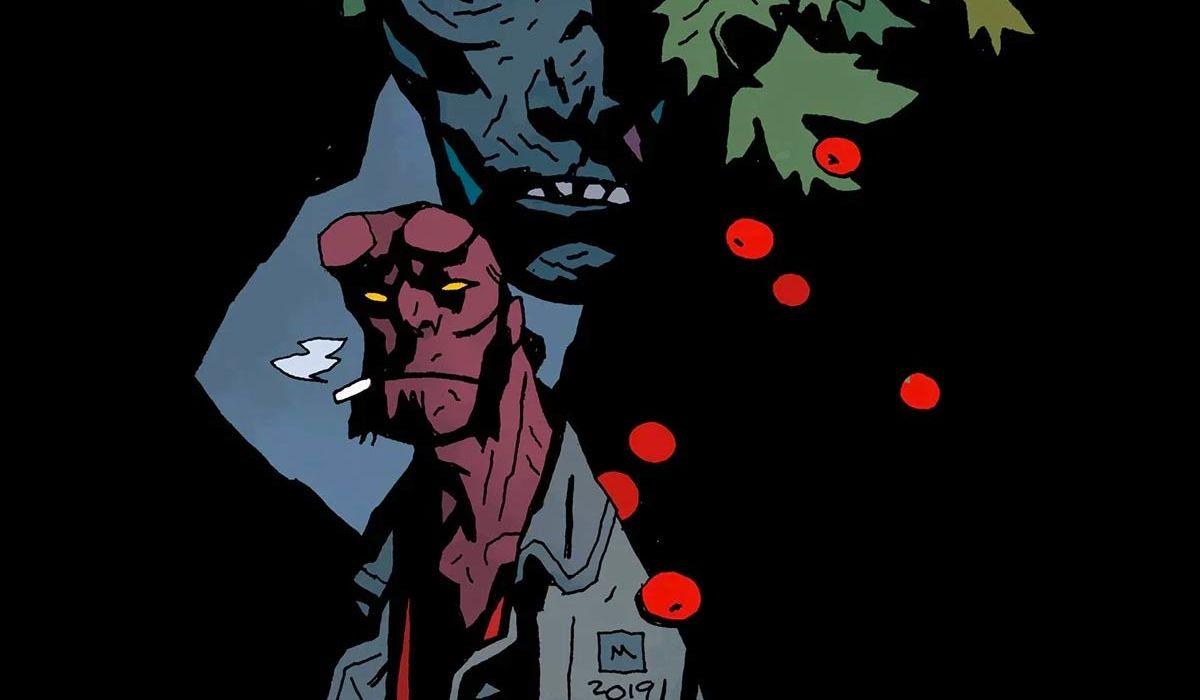 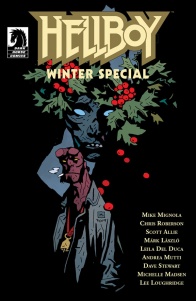 Cover by Mike Mignola
Meet a ghostly miser in an alternate reality, fear the Boogam of rural New York, and embrace the wrath of St. Hagan in this trio of occult winter tales! The familiar faces of Hellboy, Sarah Jewell, and the legendary Knights of St. Hagan will help you ring in the new year with all the shivers you can take—and not all of them from the cold!

Mark Tweedale: The thing that immediately catches my attention with the “Hellboy Winter Special 2019” is the artists—each one is new to the Hellboy Universe and I was eager to see what they’d do. Before reading ‘The Miser’s Gift,’ I was almost completely unaware of Márk László’s work outside of a few covers, and so I had tremendous fun seeing how he brought this tale to life.

‘The Miser’s Gift’ is a story that needs an artist that is invested in the environment; it simply wouldn’t work if the streets and buildings didn’t have personality. László finds the necessary contrast, making it clear to the reader these are different streets and different times, but still finding enough similarity that they feel like the same city. I guess it shouldn’t come as a surprise that an artist that lives in Budapest draws Budapest beautifully.

But this isn’t just a good story because László knows how to draw the city he lives in—he knows how to draw a “Hellboy” story. He’s got a fascination with shapes, so each character has a distinctive silhouette. As much a László’s drawing style is different from Mignola’s, the distinctiveness of Hellboy’s silhouette is faithful to a T. And I got a real kick out of his expressive hands—again, impeccable silhouettes at play. I also loved that the Miser’s figure was as warped as the buildings of the Budapest hidden street; it was a nice visual to connect the two, and it places the Miser in stark contrast with the other characters, even without Dave Stewart’s colors.

Oh, those colors! It’s easy to point to the big, explosive stuff and admire what Stewart’s doing, but for me it’s all the little things, like the way he limits his palette for the secret street so that the “pop” colors are on Hellboy, the professor, and the young man. Contrast that with the pub at the beginning of the story, which uses a similar base palette, but has little pops of colors in the pub itself (like a lightshade being green) and we immediately get a sense that three characters belong in this location. Stewart’s storytelling is such a pleasure to read.

Meanwhile, Mignola’s doing that thing he does, where he crafts a story that feels both familiar and unique. I felt like Mignola had a really great year in 2019, especially with his one-shots, and this short story suggests 2020’s going to be just as strong. There’s a playful quality to László’s drawing style, and I feel like Mignola accentuated that aspect in his writing for him. And it ends fantastically, with a panel that accents the playfulness.

Brian Salvatore: Sometimes, there are just not enough pages to tell an appropriate story. At eight pages, ‘The Longest Night’ condenses what seems like a full-length comic into something a third its size. It is centered around a murder we don’t see, of a character we don’t know, in a setting that is unfamiliar, with a legend that we are introduced to in these pages.

Sarah Jewell is a minor Mignolaverse character, but her role is easy enough to figure out in the story, even if you had never read “Rise of the Black Flame.” However, in ‘The Longest Night,’ she is given the unenviable role of just being the information spout for the legend of the Braithwood Boogam. We don’t get any real sense of Sarah as a character, or how she’s grown or changed since we last saw her. She is obviously both a good paranormal investigator and a good detective, as she solves the murder in no time, but everything about the exchange between Sarah and Mr. Durant is rushed. Sarah’s accusation seems to come out of nowhere, as does Durant’s confession, but with only eight pages to work with, them’s the breaks, I suppose.

The highlight of the story is Leila del Duca’s artwork, which perfectly captures the snowy, remote area’s tranquility and menace, without leaning too hard on either. The Boogam itself is incredibly disturbing looking, and del Duca mixes a number of aspects together into something really gruesome: an oversized cow skull, goat’s legs, skinless, muscular torso, and long claws. Del Duca only draws two panels of the Boogam, but the two appearances really count, and punctuate the sleepy New York hamlet with true horror.

This feels a bit like a tease for a new Sarah Jewell–led series, which could be a fun addition to the Mignolaverse lineup, but as a stand alone story, it felt rushed and undercooked. There are a number of elements that could have, and should have, worked here, but due to the extreme brevity, nothing really coalesced.

Mark: Unlike ‘The Longest Night,’ which felt like a teaser, but still told a nicely self-contained story, ‘The Beast of Ingelheim’ feels like it only exists as a teaser for the upcoming miniseries “The Last Knight of St. Hagan.” It spends a good portion of its page count just telling the reader who the Knights of Saint Hagan are before it can even get to the story; its purpose is more about educating the reader in the history of the Knights than telling a story about these characters. I mean, it does both, but it’s clearly weighted more towards one than the other.

When Mignolaversity was initially sent the preview PDF of the “Hellboy Winter Special 2019,” it was missing the credits page, but even still, it was exceptionally easy to tell who wrote each story. ‘The Miser’s Gift’ is classic Mike Mignola, ‘The Longest Night’ could only be Chris Roberson, and ‘The Beast of Ingelheim’ carries all the hallmarks of a Scott Allie story. It fits comfortably next to his other works like, ‘The Burial of Katharine Baker,’ ‘B.P.R.D.: Casualties,’ and “B.P.R.D.: Hell on Earth—The Transformation of J.H. O’Donnell,” all of which are about the cost of doing a job and even perhaps questioning whether the job is worth doing at all. Sometimes the cost is too high.

Andrea Mutti’s work is a bit of a no-brainer—one look at his art and it’s effortless to imagine him working in the Hellboy Universe. He obviously fits. . . and yet ‘The Beast of Ingelheim’ looks strikingly different from other Hellboy Universe titles. The colors are clearly not Dave Stewart, nor are they trying to be. It seems this is a bit of a preview of “The Last Knight of St. Hagan” style, since even Sebastián Fiumara’s cover has this limited approach. For my taste, the colors were a bit too limited, especially in terms of contrast between the scenes with the monk writing in his journal against the scenes with the Knights hunting the beast—in both the exteriors are the same blues and the interiors are the same yellows. But then, maybe that’s the point. After all these years, the monk is still living with his vile actions of the past.

However, if I hadn’t read the narrative caption, I wouldn’t know how to read the monk’s emotion in his final panel. It’s a muted character moment because it’s primarily carried by text and pacing. Considering he is about to burn what he’s written, I wanted something in the visuals to contrast against who he was when he started writing the story versus who he is after he’s finished writing, and I felt like the color could’ve provided that extra punch.

Final verdict: 7 – All three stories in 2018’s Winter Special felt complete. 2019’s Special gave us two stories that mainly existed as teasers, and while they certainly worked as teasers, it does put a cap on how much satisfaction a reader can get from them. That said, seeing László, del Duca, and Mutti doing such fantastic work makes the “Hellboy Winter Special 2019” absolutely worth it. 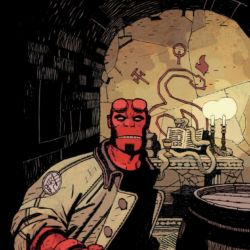 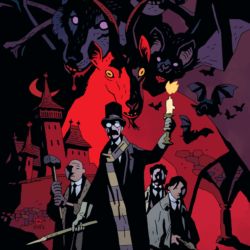 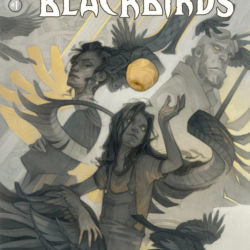