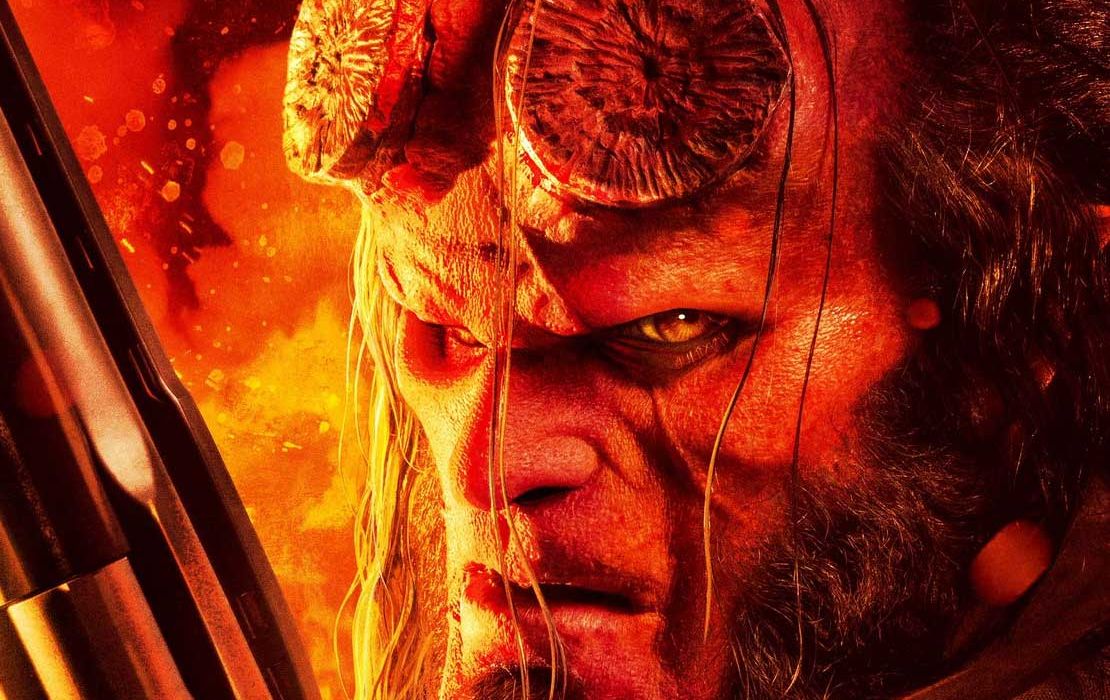 The 2019 Hellboy film is inexplicable. But we’re here to figure it out, so I’m going to do my best. It’s a reboot, disconnected from the cult classic films by Guillermo del Toro. This film is arriving in a world chock full of comic book adaptations, smack dab between a SHAZAM movie and the 22nd Marvel film. It’s important to have a unique hook to stand out from the rest of the pack. And “Hellboy” has always been a unique comic book, and a personal favorite of many, many comic fans. Unfortunately, the movie distinguishes itself in all the wrong ways. Hellboy is a catastrophe.

First, a spoiler-free assessment. There was too much movie in this movie. Stuff is constantly happening to our heroes, but they rarely are choosing the act. It’s a movie of reactions, surprises, and violence. Unbelievable violence. At first it’s shocking, then it’s sort of fun, but by the end, you’ll be numb to it. It’s as if you thought you were sitting down to watch Ghostbusters but somebody put on Hellraiser instead.

The film is not without its merits and if anything, that’s what makes it so frustrating. David Harbour really gives it his all as Hellboy. He’s grumpy, impetuous, and doing his best to work the makeup and not let it work him. Ian McShane is perfectly cast as Professor Bruttenholm (who’s name is pronounced inconsistently throughout the film). The character is written to be a real nasty piece of work, but McShane is so magnetic you’ll have a good time watching him even when you can’t stand the character. Similarly, Sasha Lane makes a lot out of a little with the role of Alice Monaghan. She’s expected to shout Britishisms in every seen (“Wicked!”) but she tries to have fun with the part, so you can have fun watching her.

Unfortunately, the very talented Daniel Dae Kim is overwhelmed by the character of Ben Daimio. He can’t really handle the British accent (Daimio is British now), and his character is unbelievably cruel, with few redeeming qualities. Kim is very charming, but he’s given few opportunities to show it. There’s a spy script out there for him, but here he’s given a thankless role. Milla Jovovich is the film’s villain, Nimue. All she’s expected to do is vamp and cackle. In other words, she is very well cast, doing what she’s good at.

But damn is there a lot of movie in this movie. “Hellboy” comics cover a wide array of spooky stuff, but this is a single film, so every new element it adds from the comic means more exposition. That means lengthy explanations of giant hunting, spirit mediums, the occult wars of the 1940s, Arthurian myth, faerie changelings, were-creatures, and what feels like a dozen other shoehorned ideas. You’re introduced to a character, trying to figure out how they fit, only for them to be killed off minutes later. Gruesomely.

All of this serves to make the world feel very big. That’s sort of fun, because you can see the pieces of a wider world of supernatural conflict. But if you have a low tolerance for movies being used as pilots for cinematic universes, you are going to be pretty unhappy.

The inconsistency extends to the effects as well. Setting aside fidelity to the source material or previous films, Hellboy looks pretty cool. Some effects, such as a spiritually infused super punch, are clever and imaginative and a lot of fun. But then you have a pig monster that just looks… bad. His face looks like rubber and his mouth movements don’t make any sense. An early shot of a CGI scorpion crawling down Hellboy’s arm evoked feelings of the CGI gopher from Indiana Jones and the Kingdom of the Crystal Skull. But when it looks cool, it looks cool, and that makes the gaffes even less forgivable.

I should have been an easy mark for this movie. Hansel and Gretel: Witch Hunters is very much in my movie rotation. Give me monsters, big swords, some Alice Cooper, and I’m good to go. But Hellboy left me checking my watch. It’s hard to pinpoint where exactly it went wrong, but the end result is a mean-spirited, poorly written, loud, bloody mess.

Final Verdict: 2.0/10 – The few moments the movie shines just remind you how disappointed you are with the rest of it.

And now for some further thoughts, that are going to go into spoiler territoty.

From the first moments of this movie, I really thought I was going to like it. We open with a flashback to Arhurian times, narrated by Ian McShane. He tells us the year. “The Dark Ages,” he adds. “They were called that for a fucking reason.” And that’s great! Any halfway competent movie knows Ian McShane is at his best when he’s dropping some major f-bombs.

I continued to be amused when HB drove down to Tiajuana and got involved in some Lucha Libre shenanigans. Mexican wrestling is in the “Hellboy” comic DNA, and I don’t need an excuse to enjoy mucha lucha. When the familiar strains of Rock You Like a Hurricane started playing? I threw up the horns in my seat! When I realized it was a cover in Spanish? I grinned like a fool. This was going to be a good time.

My smile wavered when Hellboy tossed his vampire pal onto the post. There was no weight to it, just a CGI monster getting impaled. The physics of it looked wrong. It shook me from my delight. And it was an omen of things to come. A lot of the CGI was hard to follow, weightless flubber. It made a lot of the more exciting moments feel literally hollow.

But the moment where the film truly lost me came at about three quarters of the way in. Alice was poisoned by Nimue and Hellboy was desperate to save her. He threatens a witch, who gives him directions to someone who might save her. That someone turns out to be Merlin. He reverses the evil spell quite easily, then delivers some motormouthed exposition explaining that Hellboy is the half-human heir to King freaking Arthur. Oh and Excalibur is right over there, but only for three minutes, then it’s going to vanish and return to Arthur’s side. Hellboy has doubts about pulling the sword from the stone, and in that time Merlin uses the rest of his magic and crumbles into dust.

It’s silly, but it’s kind of rad. But then I remembered- the only reason the heroes sought out this cave was to find the cure for Nimue’s curse. The Arthur exposition, the offer of Excalibur, Merlin’s surprise demise, none of that was something the heroes actively sought out. It was just sort of a coincidence. They came looking for a cure, but instead they found the next plot breadcrumb. And suddenly my suspension of disbelief was shattered.

It’s a funny thing. The Marvel flicks are full of contradictions, of plot holes, of stupid coincidences. But you don’t notice because you’re having a great time. There’s a lot you’re willing to overlook if you’re having fun (how do the Avengers talk to each other in the first Avengers movie when none of them are wearing earpieces?). Hellboy is not fun. And that makes it’s many flaws less forgivable. Once I noticed one bad writing move, the whole movie collapsed like a house of cards.

It’s a shame. I know I’m not the only one who wants 10 more Hellboy movies, a BPRD series, a Lobster Johnson spin-off. Give me movies for Baltimore and Frankenstein Underground. But I fear that Hellboy is going to scare away filmmakers for a long time. Hopefully, we will all learn the right lessons and remember that it’s okay for a movie to be dumb as long as it remembers to be fun.