“Heretics!” is better defined by what it is not than what it is.  It is not a comprehensive exploration of any sort of philosophy.  It is not even an introductory course.  And it is definitely not a stunning work of art.  Yet it succeeds in filling the niche it aims for: a growing collection of graphic, nonfiction, snapshots of history and science in the vein of “Logicomix” and “The Thrilling Adventures of Lovelace and Babbage.”  Within these parameters, “Heretics!” is neither the most scholarly, nor the prettiest, but it is possibly the most ambitious. 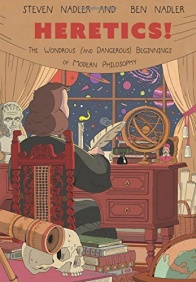 Cover by Ben Nadler
Written by Steven Nadler
Illustrated by Ben Nadler
This entertaining and enlightening graphic narrative tells the exciting story of the seventeenth-century thinkers who challenged authority―sometimes risking excommunication, prison, and even death―to lay the foundations of modern philosophy and science and help usher in a new world. With masterful storytelling and color illustrations, Heretics! offers a unique introduction to the birth of modern thought in comics form―smart, charming, and often funny.

These contentious and controversial philosophers―from Galileo and Descartes to Spinoza, Locke, Leibniz, and Newton―fundamentally changed the way we look at the world, society, and ourselves, overturning everything from the idea that the Earth is the center of the cosmos to the notion that kings have a divine right to rule. More devoted to reason than to faith, these thinkers defended scandalous new views of nature, religion, politics, knowledge, and the human mind.

Heretics! tells the story of their ideas, lives, and times in a vivid new way. Crisscrossing Europe as it follows them in their travels and exiles, the narrative describes their meetings and clashes with each other―as well as their confrontations with religious and royal authority. It recounts key moments in the history of modern philosophy, including the burning of Giordano Bruno for heresy, Galileo’s house arrest for defending Copernicanism, Descartes’s proclaiming cogito ergo sum, Hobbes’s vision of the “nasty and brutish” state of nature, and Spinoza’s shocking Theological-Political Treatise.

A brilliant account of one of the most brilliant periods in philosophy, Heretics! is the story of how a group of brave thinkers used reason and evidence to triumph over the authority of religion, royalty, and antiquity.

Let’s start with a little disclaimer.  If you came expecting realistic art, you are barking up the wrong tree.  “Heretics!” is done in a clearly cartoony style.  The faces have little variation from panel to panel or from character to character.  Often there is little to tell the various giants of contemporary philosophy apart from each other, save their hairstyles.  And sometimes not even those.

While many great graphic novels have done a lot with very simplistic styles, Ben Nadler’s combination of simplistic faces and otherwise intricate design work is off-putting at best.  At worst, it confuses characters and undermines the gravity of subject matter.  It is clear from the realistic detail of anything that isn’t a human being, that Ben Nadler is a talented illustrator with a strong sense of style.  His choice to eliminate nearly all facial complexity and differentiation is therefore frustrating.  Whatever the original goals of this style were, they are undermined by the visual drawbacks.

So, the art ends up taking a back seat to the text.  On its face, “Heretics!” is almost dauntingly ambitious.  It is a survey of some of the most debated and discussed thinkers of western philosophy, placed in historical context.  The reality is somewhat less overwhelming.  Steven Nadler opted for a very dry account of the subject matter.  It is less focused on the events of history than the actual content of theories of Descartes, Spinoza and other seventeenth century thinkers.  The result is more of a discourse than a true historical survey.

The book’s biggest strength lies in this discourse.  Steven Nadler skillfully distills complex theory and metaphysical concepts into neat, point-counterpoint dialogues, using Ben Nadler’s detailed art to establish a striking visual vocabulary for the more abstract concepts.  Here is where the art is at its best; in the visualization of Descartes’ pure thought-form and Leibniz’s Monads.  When later philosophers refute or expand on these core concepts, the imagery reinforces the ideas and then expands on the visual vocabulary.

Another strong element comes when Steven Nadler is discussing the more practical work of Hobbes, Locke and Newton.  Dipping into the fields of politics, and experimental science lets the reader take a break from heady metaphysics and indulge in some visual humor too.  Ben Nadler’s humor is often simple, but helps to cut down on the intimidation factor of the source material.

Even with the sight gags, this project could quickly become overwhelming, but the Nadlers keep the scope of the book tightly focused on Rene Descartes and the immediate reactions to his theories.  This Cartesian anchor is limiting, but prevents the book from ballooning out to unmanageable size.  The tight focus also sacrifices a lot of historical context.  With the exception of a few vignettes, such as Baruch Spinoza’s excommunication from his community of Sephardic Jews, or John Locke’s flight from England on suspicion of planned regicide, “Heritics!” is frustratingly ahistorical.

This is where the comparison to Apostolos Doxiadis and Alekos Papadatos’ “Logicomix” or Sydney Padua’s “The Thrilling Adventures of Lovelace and Babbage” stops holding up.  Where both of those works, and others in the genre, seek to create narratives of scientific discovery through historical context, “Heretics!” is almost exclusively focused on the ideas.  While all of the subjects of “Heretics!” are historical contemporaries and some even interacted, these historical elements are secondary to the ideas and discourse itself.

It is difficult to evaluate “Heretics!” success as a ‘graphic novel.’  While there is a narrative and clear progression of ideas, both visual and philosophical, the book ultimately has more in common with comic ‘textbooks,’ such as Larry Gonick’s “Cartoon History of the Universe.”  Using that as a measuring stick, “Heretics!” is wildly successful, combining academic knowledge and apt visual aids with just enough narrative to create a story, if not actual history.  But is that enough?

Towards the end of the book, the perspective shifts to that of Francois-Marie Avouet, more commonly known by his penname, Voltaire.  A critic of most of his contemporaries, Voltaire was as much a satirist as he was a philosopher, but the Nadlers focus on one element of his work in particular: his contrast of Descartes and Newton.  Voltaire laments the veneration of Newton at the expense of the Descartes, and reminds his readers that both men would have been put to the stake and burned not even a century before.  It is a powerful sequence that reminds us that the journey, and the risks taken to make it, are just as important as the destination.

It is unfortunate that this lesson did not carry over to more of the narrative of “Heretics!”  It is the difference between an illustrated text and a graphic novel.  “Heretics!” awkwardly straddles that genre divide, not quite as dry as a textbook, but not as vivid as a story.