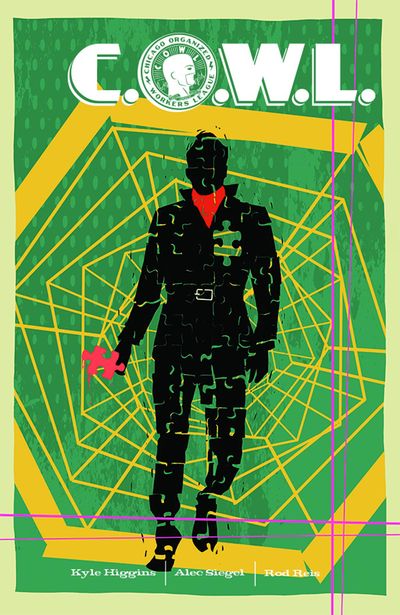 As the first story arc of “C.O.W.L.” comes to an end, loyalties change, enemies are made, and heroes go on strike in another great issue.

As a note, this discusses spoilers for the first arc of “C.O.W.L.”, including this issue. 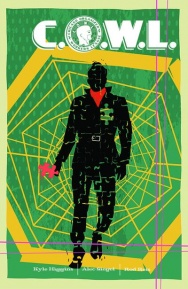 The end of the first arc and a huge turning point for the series! John Pierce and Geoffrey Warner square off over C.O.W.L.’s big secret, Radia faces public outcry, and Arclight resorts to lethal force . . . against one of his own.

This era of comics might very well go down as the Golden Age of Image. It seems like every week brings about a great new series from critical favorites like Ed Brubaker, Matt Fraction, Kelly Sue DeConnick and Jason Aaron, while continuing stories from Robert Kirkman, Brian K. Vaughn and Jonathan Hickman get tons of much deserved attention. While great for the company, it now seems quite hard for a new series to make an impact, especially when it’s about something as quaint as a team of superheroes. Wrapping up their first storyline five issues in, the creative team behind “C.O.W.L.” have created a unique and attention grabbing story, and made an issue that cleverly plays with expectations.

Reeling from the death of one of their own, the former heroes that make up C.O.W.L. have gone on strike and thrown the city of Chicago into a state of fear. The organization is going through internal discord with the revelation of the identity of the mysterious leaker, and leader Geoffry Warner (aka the Grey Raven) is barely keeping the group together. Desperate for a solution, Warner make a rash decision which will have enormous ramifications for “C.O.W.L.” and the city of Chicago.

The writing team of Kyle Higgins and Alec Seigel are really going for the slow burn, and are letting their story seep from the dark back alleys of the city. After losing one of their own, it would seem like the group is poised for a lot of vengeance-motivated fighting, but Higgins and Seigel turn expectations around. This installment feels more like a denouement than a big conclusion, and is much more interesting for it. Instead of shoehorning in big fights, they focused on smaller character moments that signified a breaking moment for the organization. Arclight’s decision to get the old costume out of the mothballs and be a superhero again represents the end of an era for C.O.W.L. just as clearly as a massive firefight.

This issue continues the excellent pacing seen throughout the series, but they do it without cramming a ton of scenes into the book. Most of the issue consists of dialog driven scenes, with plenty of moments for the words to rest. Warner’s talk with Arclight features plenty of small moments where only a couple of words are allowed to be featured on a single panel. It lets the character drive the scene, and doesn’t feel like plot being forced in; it feels like the whole series has led to the moment when Warner decides that villains need to return to Chicago. The writers have taken every opportunity to imbue a sense of weariness and fatigue into the character. The way he navigates through the haze of municipal politics reveals that he has mastered this skill while simultaneously despising it. He’s been ready for the day when this system goes to hell, and the writers have developed the character to a point where his extreme decision makes perfect sense to the reader.

The one thing that has been apparent from the first issue is that Rod Reis is creating some of the most interesting and dynamic art in any comic. Now five issue in, Reis has refined the look of all the characters while simultaneously expanding the world of the city even further. As strange and surreal as the images can be, the faces of the characters have remained very articulate and expressive. Reis’ uses of dark lines on the faces of Arclight and Warner even go as far as to create a bond between the two characters. They both look tired, like they’ve been prematurely aged. Their expressions inform the reader that these characters are ready to do something drastic just as effectively as their words.

The art really ramps it up when Arclight confronts the treacherous Pierce in an alley. Pierce chases a pair of robbers, breaking the C.O.W.L. strike, and engages in the only fight scene in the issue. This is when the images get their most surreal, and the motion of the robbers creates a wave that affects the entire panel. When one of their guns goes off, the images ripples like a bomb went off, lending real gravitas to the scene. When Arclight delves out some street justice, the art goes into some McKean-esque “Arkham Asylum” territory. This really works as this is the most viscerally violent scene in the issue, and Arclight’s actions are representative of the damage that C.O.W.L. has suffered. Reis furthers this tone by making the art look damaged and distressed as well.

Final Verdict: 7.5 – “C.O.W.L.” #5 successfully plays with expectations of the reader and sets the stage for massive upheaval in the streets of Chicago.