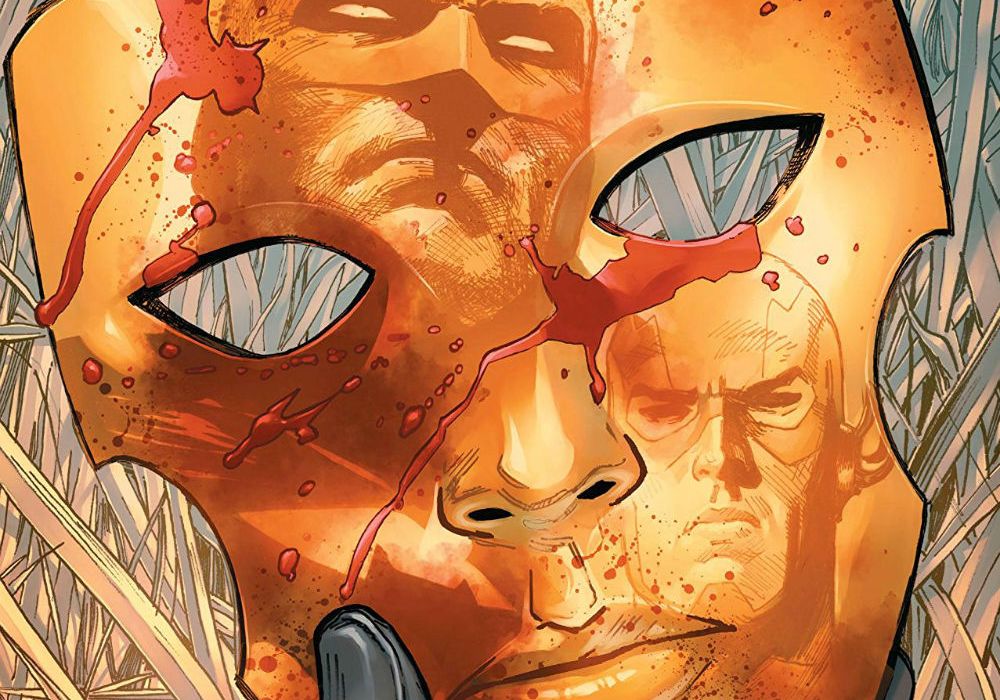 DC’s third big event comic of the year (after “Metal” & “Doomsday Clock”) finally begins to pull back on some of the mysteries of Sanctuary that should never have been mysteries in the first place. Spoilers ahead 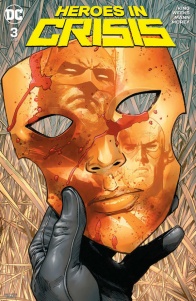 The Man of Steel versus…Booster Gold?! Superman finds out the hard way that Booster can be a formidable opponent when his back’s against the wall. Of course, being the prime suspect in a superhero massacre and exposing a secret trauma hospital for metahumans will do just that. Meanwhile, Batman and the Flash combine their detective skills to investigate what went awry at Sanctuary and uncover a serious glitch in the system—not to mention an explosive, spoiler-ific secret!

Three issues into this seven, now nine, issue event comic that bills itself as a crisis-level story, purposely evoking the iconography of “Identity Crisis,” and we finally have a bit of an understanding of the operation of Sanctuary. The location, not the idea, is a concept that is well worth exploring: what do heroes do when, not if, they experience trauma? This kind of question has been at the heart of King’s DC work, from “The Omega Men” to “Batman” to “Mister Miracle,” all with varying degrees of success.

However, so far, “Heroes in Crisis” hasn’t been about that. It hasn’t been about the processing of trauma or about the ways in which Sanctuary actually operates or how the heroes/villains interact with each other and with the location, thereby making it feel like a living, breathing place as opposed to a set. Instead, “Heroes in Crisis” chooses to focus on the deaths of a whole host of heroes and villains as the impetus for heroes fighting heroes. . .again.

Issue #3 takes a step-back, doing away with many of the story’s worst aspects, and allow us to experience Sanctuary along with Booster, who for all intents and purposes should be our focal character along with Harley, instead of the Big Three, who dominated issues 1 & 2. Up until this point, Sanctuary has been more concept than actuality, existing only in the extensive references outside of the comics, which don’t count, and only mentioned, not described, quite a few times within.

So, when Sanctuary was introduced properly, what was it? According to what we could glean from issues 1 & 2, it was a home for heroes & anti-hero villains to escape the superhero world and try to receive treatment for their traumas. They achieved this by talking to Sanctuary, three robot/AIs that recorded all of their confessions but never talked back — less therapist and more listener, all meant to look like farmers from the midwest. It was a place to unload.

This is not quite the case once page 2 pulls back on Lagoon Boy getting hit in the chest by a laser, which we later learn is in a simulation. The masks, which were a motif or a reference to Psycho-Pirate, who has yet to show up, turn out to be something everyone wears for anonymity. Where were these details two issues ago? Why are they only now being introduced and why is it only now that we’re delving deeper into the traumas of these characters?

I’m harping on this because for a story to have the weight that “Heroes in Crisis” wants to have, it must provide a reason for and a vehicle to convey that weight. As it stands, there has been little reason to care besides the external histories of these characters. We had no context, and now have little context, for how Sanctuary operated or who these characters are: even “Identity Crisis” set up Sue Dibny in the pages of the comic before her death. We knew who she was and why her death is significant BEFORE the mystery.

There is a place for this kind of atemporal storytelling, wherein the bodies’ lives are brought into relief throughout the course of the investigation, but for that to work, the mystery must be engrossing and the characters must be revealed via the present day situations and not flashbacks unconnected to it; otherwise, it leaves the question on the table: why not start with this information?

Additionally, part of the problems with the way “Heroes in Crisis” #3 approaches the story comes from King’s characterizations – namely, there aren’t any.

Wally, Booster, and Lagoon Boy, the focal characters of this issue, don’t feel like themselves. Booster in particular feels like a poorly rendered version of his earliest self, more buffoon than prideful. Granted, King is only showing them attempting to deal with their traumas and, in that, they express it in three different ways: fantasy, denial, and exposure respectively. Beyond that, we have very little to go on as to who these people are, why they came to sanctuary in the first place, and what they want to get out of it.

The framing device of the heroes talking to, ostensibly the readers, works wonders to introduce us to who Booster, Lagoon Boy, and Wally are. Booster is brash and covering up, Lagoon Boy is resigned, and Wally is angry. Mann’s artwork does most of the heavy lifting, conveying everything we need to know via the character’s posing and facial expressions while King’s dialogue helps support that via terse or broken sentences. However, once we leave the nine panel grid, everyone is reduced to their respective coping mechanisms because none are able to be given enough page space to breathe and express themselves. They feel less like heroes in crisis and more like different facets of the beast called trauma.

We are drowning in their misery without knowing who they are under the masks and the pain.

The best praise I can give this issue, and perhaps the whole series thus far, is that Weeks’ artwork is stunning. His control of the page and of environmental design, of making Sanctuary feel like a living, breathing place, with rooms that tell us more about the characters than the characters do, is one of the strongest parts of this work. We can feel the agony of Lagoon Boy every time he gets shot and pushes himself off the ground again. We can see the pained joy that Wally’s lost family brings him. The splash page of Booster, crying into his hands with a cascade of dialogue along the side, is a heartbreaking image; the only problem is that the dialogue doesn’t match up with it. Maybe he’s actually angry. Maybe he’s frustrated because his pride is too great and it won’t let him actually ask for help when he desperately needs it. I can’t say because we have not been given enough time with the Booster to make that call.

There is one other moment that, were we to have opened the series with it, would have set the tone perfectly. Booster has just been introduced to Sanctuary and responds to each instruction with one word, cheery platitudes before the final panel, where he slumps over the bed, in shadow, his head in his hand. It’s a striking image that, again, does not feel earned knowing what we know from earlier issues and from what we know about why he’s here — presumably because of the events of ‘The Gift.’

This event is even less earned because of how soon after the massacre occurs. I won’t speculate on how this should have been done or paced out across other issues, as that is me rewriting instead of critiquing, but the constant repetition of the deaths of these characters reveals a pacing issue that hurts the overall narrative. Instead of revealing what happened via this flashback, which is how it is paced out, we got a tiny bit more information and a series of vignettes that tell us about the various kinds of trauma but not about the people experiencing them. The deaths, too, come across as cynical instead of tragic, being the primary motivators for a murder mystery and not an introspective look on how the deaths of one’s friends affects heroes.

We don’t need this. We don’t need another event comic that’s bogged down by an uninteresting mystery and unearned, unnecessary deaths; we have “Cry for Justice” and the aforementioned “Identity Crisis” for that. This could have been something spectacular. This could have been something different. Instead, it’s a beautifully drawn, cynical mess with hints of a truly unique idea.

Final Score: 4.5 – The best issue so far, with art that gets the tone of the piece. Yet it is hampered by a cynical story, near-non-existent characterization and aspects that should have been present two issues ago. Hopefully the shift in focus is indicative of something better to come but I’m not holding my breath.