“Heroes in Crisis” reaches the halfway mark and the two main intentions on this series become clearer. The combination of a core detective story, with an appealing discussion on trauma, mental disorder and paths to recovery (or lack thereof) make for a complex and interesting package, and one that is better appreciated upon multiple read-throughs. 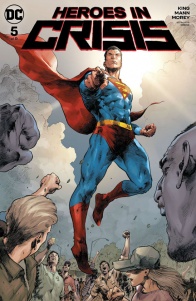 The secrets of the DC Universe are hacked! Sanctuary wasn’t supposed to keep records, but now that the A.I. is compromised, superhero secrets are leaking all over the ‘Net. Booster and Harley set aside their differences to focus on who they believe is the real killer (assuming one of them isn’t lying, that is). Meanwhile, Batman and the Flash continue to investigate the mysterious murderer. The answer can be found in Sanctuary…but is it safe to go digging in the crime scene?

There is a lot of coverage, opinion, and criticism over “Heroes in Crisis,” from how certain characters have been treated so far, to how specific covers of the project fail to be sensitive to the current portrayal of female characters. Equally in the spotlight, the pace of this series and how the story is told in a very deliberate pace, also make it a challenge to judge each entry on its own merits. Rather than a serialized story, “Heroes in Crisis” reads much more like a continuous narrative, with elements introduced now and in the beginning mashing together to form a stronger cohesive whole.

One aspect that has been decidedly a highlight since its first issue, the art by Mann and Morey, surely continues being a selling point of “Heroes in Crisis” on issue #5. First of all, Mann shows mastery of the two story paces that the script calls for. On the situations where the psychological aspects of the story, and the reaction of Superman and Wonder Woman to recent reveals, take center stage, pages are heavier on panel count and closer to the characters. That allows for much needed focus on facial expressions and smaller details, nuances that build from panel to panel, providing readers a strong understanding of the spirit and emotional situation of all parties involved. When the action is set loose, pages are much wider in nature, with splash pages or few panels occupying that space. The juxtaposition of styles can be jarring on some transitions, but it feels intentional, almost like a tug of war that readers have to go through, at the same time that characters are going through extreme situations.

Going further into specific elements of Mann’s drawings, there is a lot to appreciate when the camera pulls away from the facial expressions. Moments like when Batgirl and Harley Quinn zip through the skylines, or when Booster Gold interacts with Flash are a joy to look at. Those are high-octane moments, yet rendered with so many details and attention to background that readers will slow down to take it all in. Also, a particular page early in the issue contains something of a puzzle, and that is so cleverly hidden that it produces a sense of a “a-ha!” moment when one looks at it. It shall remain unspoiled here, but pay close attention to the background on the page where Booster and Beetle are sitting on a couch.

Raising praise to Morey’s work on colors might seem like a redundant thing to say at this point. The artist has proven to be a modern-day benchmark for this aspect of comic book art, and “Heroes in Crisis” #5 is surely an example of that. The way that Morey includes lightning effects during the nigh-time, including some distortion effects on water is worth admiring. Other energy effects, or even the simple changes in hues in uniforms come across as a very impressive whole.

Talking about King’s scrip and plot is a major challenge without raising spoilers , and while this review will not comment directly about any of them, please tread carefully from this point on. The writer most obviously has a lot to say about post-traumatic stress disorder, and gradually peels the layers of how certain characters are reacting to the events around them. The scene where Superman addresses the media about the impact that super-heroing has on these individuals is, simply put, beautiful to examine. It walks than thin line between being preachy and falling flat, and yet it succeeds on being endearing and true. It adds to why these beings are heroes: not because they don’t feel pain, but precisely because they do feel and still push forward to protect humanity.

Towards the detective components of “Heroes in Crisis,” this is where the jury it still out on what King accomplished. Taken as a stand-alone issue, this piece clarifies some pieces of the chessboard, but adds just as many questions as to what it really means. At this stage, the crescendo could either be a very fruitful resolution, or one that will fall short on making a coherence sense. What is enjoyable, regardless, is how certain pieces are revealed and which characters (and how) discover them. It seems far more realistic that one single individual solving the entire dilemma, and adds to the value of each player in the tale.

All in all, “Heroes in Crisis” #5 is a beautifully drawn, masterfully paced comic book and one that could, still, pull a proverbial rabbit from the hat. It is still early to claim that – and the series should only be judged on its whole, when publishing completes – but there is hope and expectation for something unique.

Final Verdict: 7.5 – While there is no doubt about it’s beauty, “Heroes in Crisis” #5 still raises more questions than it answers. And if the emotional aspect of the book is solid, its mystery component is still up for discussion.