Here’s a ‘Flash fact’ for you. For about two decades, Wally West was the definitive Scarlet Speedster. He took on the mantle in the late ’80s after Barry Allen’s untimely passing. Unlike several other legacies (Amadeus Cho, Sam Wilson, Dick Grayson, etc.), the change actually stuck. He was a worthy successor and ‘Uncle Barry’ was just a fond memory… 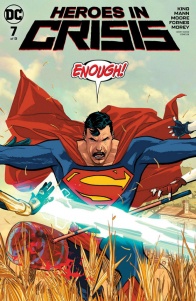 Written by Tom King
Illustrated by Clay Mann, Travis Moore, Jorge Fornes
Lettered by Clayton Cowles
Colored by Tomeu Morey
The Trinity may have uncovered the true killer responsible for the deaths at Sanctuary, but the artificial intelligence that ran the institution is the one thing standing between them and the culprit. Now Batman, Superman and Wonder Woman must face off with their own creation-and face the consequences for what they created. Also, as the truth is uncovered, Booster and Harley go from being enemies to allies.

When the New 52 rebooted the DC Universe, Wally was just a fond memory for his fans, nowhere to be seen. About three years later, a new version was introduced to mixed reception. Two years after that, DC finally decided to let him out of the Speed Force. Wally was back…and then at the start of this series, Wally was gone all over again. Now, as of “Heroes in Crisis” #7, he’s back again! I think. Not entirely sure, to be honest.

While the previous issue was a bit of a break from the ongoing plot, this one gets back to the action. Batman and Flash are searching for the fugitives Harley and Booster. Harley Quinn, with help from Batgirl, has tracked Booster down. Believing him to be behind the massacre at Sanctuary, she attacks him. A weary Booster stops fighting back and is ready to let her kill him but Harley can’t do it.

With tempers cooled, Blue Beetle and Booster reveal to Harley and Barbara that Wally’s body was five days older than it was when he died. The four resolve to help Wally and Batman finally tracks them down.

All of the confessionals in this issue are devoted to Wally. The hero tries to remain optimistic and even rush the process a bit but his issues clearly can’t be fixed overnight and are taking a toll on him. Meanwhile, a very alive Wally brings Poison Ivy back to life in a field of flowers, apologizing for hurting her and making her bear witness to his death. Wally rises to face down an identical version of himself.

So, I haven’t loved this series so far. I’ve thoroughly enjoyed some of Tom King’s other works such as Vision or Mister Miracle but this one misses the mark for me. The last issue was a bit of an improvement because it (mostly) put down the murder-mystery elements of this mini-series that I don’t care for and focused on the mental. I had hoped to see this issue continue the trend and improve some more as we barrel towards the end but it doesn’t.

Truth be told, this issue confused me. I read and re-read it multiple times and I’m still lost. How did Wally bring Poison Ivy back to life? Since when could the Speed Force do that? He clearly says he hurt her, so what was his involvement in the Sanctuary killings? Most confusing, how is he alive when he was dead and how are there two Wallys? I know the answer’s going to be ‘time travel’ but still, I need it made plain. Time travel is a headache and a half, I can’t even figure out the logistics of this.

This doesn’t feel like the best showcase for the characters featured either. Kord feels about as incompetent as Booster and it still makes no sense for for Batgirl to go rogue like this Wally especially. Harley is reciting nursery rhymes the entire issue, which is just annoying. Wally feels especially off. Having to grapple with the loss of his pre-New 52, pre-Rebirth family is an interesting concept but the execution seems lacking. The idea of Wally being the killer or involved to some degree or even doing anything shady is very much against his character.

The dialogue was also lacking. I can’t judge the poem Wally recites since a lot of poetry goes over my head too. The nursery rhymes were, again, very irritating. It just feels like Harley needed something ‘nutty’ to shout as she attacked. Overall, King’s dialogue feels repetitive, characters often repeating themselves or repeating back what other characters say. Unlike Bendis’s dialogue, which can also be repetitive but often rambles long, King’s dialogue feels stilted, characters talking in one or two word sentences.

The art is worthy of note though. There’s no denying that “Heroes in Crisis” has been a beautifully drawn series, boasting the talents of Mitch Gerads, Clay Mann and Lee Weeks. Mann’s title spread with Wally standing in a field of flowers was gorgeous, an epic feel to it that fits the epic story they’re trying to go for here. Poison Ivy’s return was great as well. Jorge Fornes’s style meshes well with Mann’s and Travis Moore does a good job illustrating Batman and Flash. It all helped make this experience a bit better.

Still, “Heroes in Crisis” #7 felt lackluster and confusing. I genuinely wanted to enjoy this mini-series but it hasn’t done much for me so far. With only two issues left, let’s hope things can still turn around a bit.