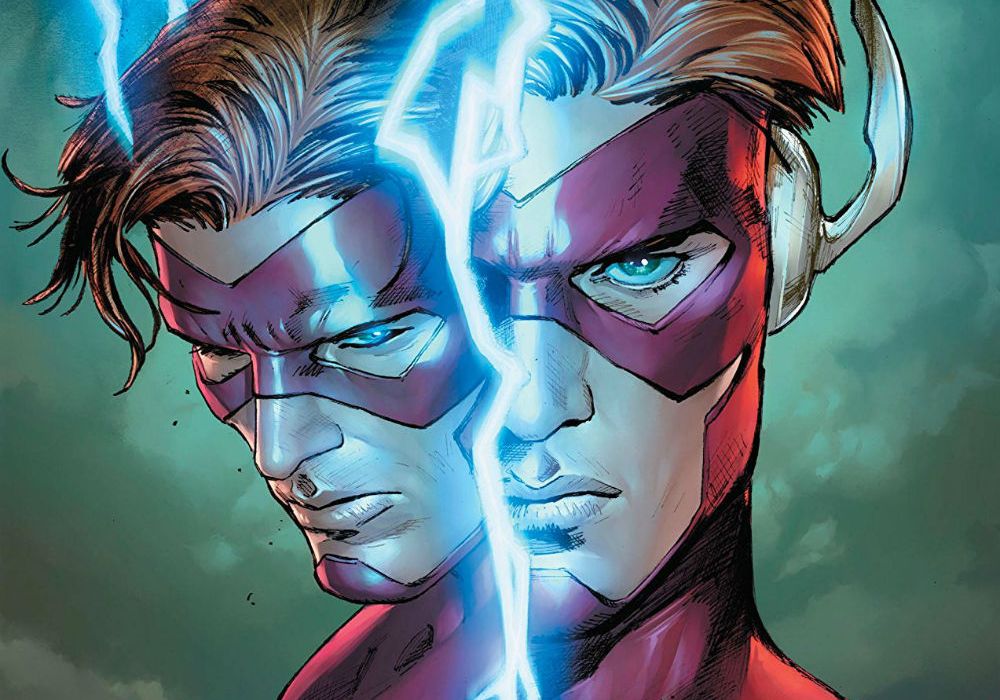 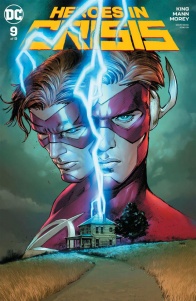 The most-talked-about miniseries of the year reaches its stunning finale! The mystery behind the murders at Sanctuary is solved, but the mind behind it is one the heroes never expected. With their deepest secrets exposed, the Trinity has to consider how to carry on. Should the tragedy cause them to redouble their efforts to help their hurting comrades, or will they need to close up shop? The answers will be found in the ashes of this final showdown, and the fates of Booster Gold, Harley Quinn and the rest hang in the balance.

“Heroes in Crisis” #9 ends the series in a way that is thematically consistent with what the title paints, in a way that much of the series was not. It makes clear the intent of “HiC,” has a message that is important to hear and resolves the mystery in a way that preserves Wally’s position in the DCU, allowing writers to tell the story that should have been told throughout the previous eight issues.

And yet, it is also an issue marred by the tragic yet unearned deaths of many current and former titans, such as Roy Harper, and the cheapness of using time travel as a solution for the mystery. In fact, the deaths of these heroes are trivialized because of the focus on Wally throughout, consigning them to the dustbins of the DCU that many were dragged from, kicking and screaming, just to be killed without ever being reintroduced or mourned by any but the one who killed them. And, not only is Wally still alive, a choice that makes me as a DC fan happy but as a reader of “HiC” furious, Roy is, perhaps, the one exception, as he was mourned in “Green Arrow.”

Moreover, the recurring issues with the obsequiousness of King’s dialog and layout preferences do not resolve themselves, despite the dialog’s increased clarity. King has found himself a style of writing that is distinct in the world of corporate superheroes and invokes an oftentimes somber and contemplative mood. When it lands, like in “The Vision,” it’s like reading a poem that get to the heart of his themes but when it doesn’t, such as throughout “HiC” or in the “Batman” arc, ‘The Gift,’ it leaves a confused emptiness, undercutting and obfuscating the ideas he wants to get across. This happens most clearly on page 15, where Wally’s thought process for the whole set-up is vocalized.

It reads like a grief-stricken person, scrambling to come up with an idea, any idea, that will help ease their mind and bring some semblance of order and justice to the world. It reads like depression and trauma and pinpoints the nuances and seemingly illogical trains of thought that accompany them. However, by detaching the words from the character, the moment loses its power. It floats in the void and feels like it was there only because every issue of “HiC” had a page like that.

The other issue is that in his attempts to simulate natural speech patterns, he captures their meandering, fragmented and opaque natures without any of the underlying meaning or uniqueness. Walls of sentence fragments spill out over full page spreads that don’t add anything to the narrative because the content of the dialog doesn’t support the space given. Moments are swallowed by dialog instead of letting them breathe, such as the scene where past Wally cries into future Wally’s shoulder while the peanut gallery exposits around them. It is meant to compliment the visuals but it doesn’t land in the intended ways.

Additionally, there is very little variation in the way his heroes speak, something that is readily apparent in all the “case file” panels throughout the issue.

In fact, let me speak on those files. In the narrative of “HiC” #9, these panels show that Sanctuary is once again up and running, and that all heroes, not just the ones who were “sent there” are going. As I reached the end, these files reminded me of the question I have been asking since issue 1: why wasn’t “Heroes in Crisis” focused on Sanctuary and the heroes in crisis?

King’s thesis with Sanctuary is that every hero has trauma and that the DCU has refused to address it, thereby showing the stigma against talking about mental health issues. That, much like in real life, we assume and pretend that the people we look up to and the people around us do not have things that haunt them, that concern them, that they regret and worry about – that they require help. He posits that there is strength in opening up about the things that have hurt us. It is clear that is what was intended as we get hero after hero talking about the unspoken. Some of those work well, such as the Robins’, while others like Jaime Reyes Blue Beetle’s feel ill-considered, the singular panel being there to fill a space more than saying anything.

It may seem silly, in light of this, that I say “Heroes in Crisis” failed to properly bring this theme to light but it’s true. We’ve spent nine issues, fragmented and focused not on the place that is central to the narrative nor on creating a sense of tragedy in the victims or even on exploring how these losses affect the greater community, the “heroes,” but instead on a few select heroes running from each other, as confused as our two “leads,” with a trinity that neither acted like nor sounded like themselves.

If the goal was to show the above as facets of the DC universe, it must first be established that Sanctuary was secret and why it was secret and then provide a connection to the heroes that were lost so they were more than one-dimensional pity puppets, thrown away to further a different character’s narrative. Then, most importantly, it is important to not distract the readers from these themes. By centering the narrative on the mystery and not on Sanctuary and its inhabitants, and not establishing Wally’s growing feeling of loneliness thereby making it come across as overwhelming, building to it, instead of telling us it is after the fact, this final issue does not have the narrative power to truly act as a conclusion.

Taken on its own, “Heroes in Crisis” #9 has everything we should have gotten out of Wally earlier on, provides the most accurate and poignant Booster moment/speech we’ve gotten out of him since before ‘The Gift,’ and wraps up Wally’s journey in a way that feels true to where he is now.

Mann and Morey illustrate the hell out of these Wally panels and anytime we get close-ups of the two, the emotions are rendered beautifully and tragically. The backgrounds are lush and full of color, the yellows of the wheat serving the tone well, the coloring and shading really bringing these pages to life. One constant thing I really appreciated was the building of the title into the environment, and the composition on issue #9’s was no different. The inclusion of the Blue Beetle’s ship, tiny against the clouds, was impressive.

However, there are many places in the comic that don’t look quite as good. Characters rarely open their mouths, having the same blank expression in every one of the case files and some, like Mr. Terrific and Metaomrpho look off, either their face is shifted down too much or is gaunt and ghostly in ways that are distracting. The full-body shots are no better, in particular the reintroduction of Poison Ivy, because the characters look emotionless and oddly shiny, like plastic dolls rather than people. They all seem overly defined, to the point that we can only assume their costumes are less than a millimeter thin, and there is something about the green anatomy doll look to Poison Ivy that is unsettling and doesn’t fit with the tone of the issue.

Ultimately though, “Heroes in Crisis” failed because it could not resolve its own identity crisis. It was a poor murder mystery, which in turn harmed the examination of trauma in superheroics. It was a poor examination of trauma because it did not engage with the questions it purported to set up with the necessary scope. It focused instead on red herrings, establishing character motivations and personalities too little and too late, and subjecting us to the same gruesome death scene over and over.

But perhaps, that was the point. To simulate the recurring, senseless pain that trauma causes. To show that there are often no causes or reasons for it, just that it is and everyone copes with it in varied ways. To explain that there isn’t often a “being healed,” only getting better, one small step at a time, and that during that process, you may fail and inadvertently harm others, but that shouldn’t stop the process.

If so, it was buried beneath a story that insulted its characters without reckoning with the burdens it saddled them with.

Final Score: 2.5 – It ends, much as it began, with the seeds of a strong idea smothered by its own pretensions and a muddy method of delivery, leaving a trail of senseless death caused by one moment of weakness.