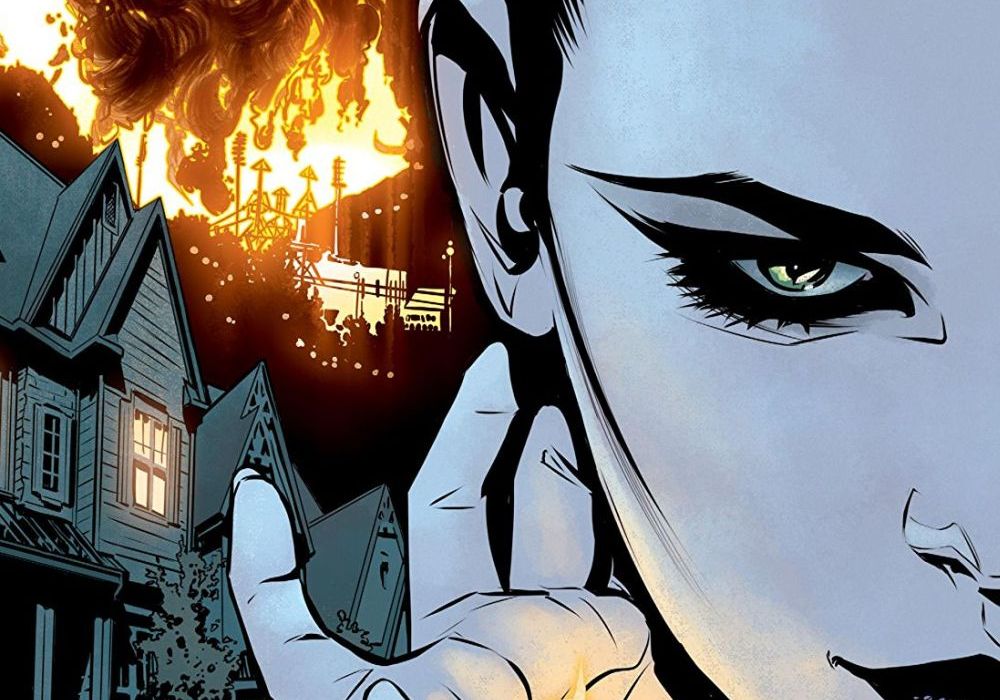 Vertigo’s latest initiative has managed to turn heads with the stellar release of “Border Town.” Now, the second of the new wave of titles, “Hex Wives,” has hit, and carries some big expectations raised by the former’s release. Can the suburban/witch horror series live up to its peers and rekindle that Vertigo magic? 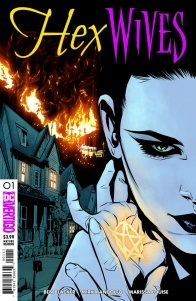 “The women are too powerful. They must be tamed.”

For hundreds of years a war has been waged between a coven of perpetually reincarnating witches and the all-male conspiracy known as the Architects. After the death of the lead Architect in 2005 it seemed the witches had finally defeated their foes.

Now, 13 years later, waking up in a perfect cookie cutter home at the end of a cul-de-sac in a sunny corner of suburbia, Isadora has no recollection of her past life as the leader of a witch coven, nor her soulmate Nadiya, let alone the centuries-old war she has waged in defense of the soul of America…

If there’s one thing that’s evident from looking back on this read as a whole, it’s that Ben Blacker truly has a way with building tension. The first half of the issue lets you relax and kind of revel in the power that Isadora and the other witches display over the course of history. You get a feel for their relationships with each other and where they stand with men, you’re shown their powers and capabilities and other worldbuilding regarding their alleged immortality. But then, we get a complete situational turnaround.

After we see the Architects deciding what to ultimately do to stop the witches, we’re shown them essentially imprisoned as housewives. And cleverly, Blacker starts to show you how hopeless they are in this reality. Each of them gets a moment where they are in contact or close to the things that activate their powers, but never realize it or disregard it as accidental. When Rebeckah accidentally superheats a lighter, you know she should be able to control and harness it but she passes it off as a mechanical failure. It builds up tension that these once powerful characters have now been subjugated their enemy so easily and perfectly caps it off by the big reveal of Aaron at the end. One issue I have with this storytelling is that the narration that handles a lot of this worldbuilding is quite different in tone to whatever is occurring, making it feel distant and out of place until we’re given the context halfway through. It’s a little disconcerting at first but realigns once we get to the meat of the conflict.

What Blacker also handles well is how he humanizes the witches and shows the Architects or more broadly, Men, as the hunters. The very first scene of the comic isn’t a panel of the witches terrorizing humanity, although it would likely be well justified. what we see is Isadora’s lover, Nadiya, being drowned and hunted by a group of humans, predominantly male. The next part of the sequence, we only see the witches act out in self-defense before one of their group is killed, causing Isadora to have a completely viable violent reaction. Throughout the story, we constantly see the Architects as the causes of the conflict, the provocateurs of the witches’ hate for men. It builds a lot of sympathy for the witches as a group, and thus when they are suburbanized, it makes it all the more terrifying that they have lost the ability to defend themselves against this predatory group.

Mirka Andolfo’s visual style is a great mix of that classic 50s cheesecake aesthetic with a more modern, stylish cartoon feel glazed over it. It feels a little clunky at first, however. When the first page shows an angry, old-timey mob, they all look a little funny as they all look a little squashed to fit in with the dimensions of the panel. However, Andolfo picks up the quality much more from here, creating terrifying imagery like Isadora tearing a man’s skin apart, her using cow’s blood to become more powerful, or Rebeckah’s burning of soldiers from the inside-out. Yet, amidst these intensely violent scenes, Andolfo conveys emotion and character moments really well. From the first panel, we see Nadiya’s terrifies eyes submerged underwater, and that really sets the tone of these characters being victims of the Architects’ violence. When Isadora takes vengeance for Rebeckah’s shooting, we see her turn from passionate anger to over-the-top glee remarkably quickly and yet still seamlessly. It’s visual storytelling that builds character and sets the tone while creating visceral landscapes to shock readers into paying attention.

The visual landscapes and page compositions made by Andolfo intertwine really well with the narrative to create a deep, storied history for this world. Examining the powerful first panel again, it’s the first that’s seemingly untrapped by borders, giving a sense of vastness to the water containing Nadiya. Then, Andolfo builds upon this sense of fear, by using very closeted and small landscapes, creating a sense of claustrophobia, that the witches are trapped by the Architects and not the other way around. Midway through the issue, there’s also a fantastic double-page spread in which scenes are separated by powerful neon pink borders, giving a sense of justified power to the witches fighting the Architects in the moments displayed. This is then completely inverted in the suburban sequence, in which panels are ordered properly and tightly composed as if they’re kept on a leash. The only moment we see something slightly different is when Rebeckah accidentally manipulates the flame of her lighter. The panel spills out into others, creating a sense of chaos, and rebelling against the order that the Architects are enforcing. It’s subtly supporting the narrative and showing readers what is really going on without the narrative directly telling.

Marissa Louise brings a lot of vibrancy and contrast to a horror toned book about witches, and I love it. There are no muted palettes here, everything is out on display and unafraid, mirroring the attitudes of the witches. It’s evident in the marbled lighting of underwater scenes, the bright, seething gradient of Rebeckah’s flames, and the vivid pink backgrounds of Isadora’s bloodcurdling rages. However, it’s important to note that Louise adapts well to different scenes. While the vibrancy is almost ever present, it’s toned down in sections like the 2005 era and becomes more flat and eerie in the Architects’ room scene. As an inverse, when the witches are suburbanized, the vibrancy becomes more pastel and flatter in tone with the narrative. Louise brings the whole deal together with panache, giving the issue a sense of vivid style.

“Hex Wives” #1 feels perfectly timed and just as relevant as “Border Town” did when it hit. Blacker has a great sense of creeping tension and character/worldbuilding to match. Andolfo has an expressive, cartoonish style that can range from suburban niceties to visceral dismembering. Louise ties it all together with unabashedly bright palettes, making for a comic that terrfies equally as well as it empowers.

Final Score: 8.3 – “Hex Wives” #1 is a chilling, yet timely and powerful debut, with fantastic visuals that range from innocently suburban to bloodcurdling visceral.