After nearly two decades of writing and illustrating children’s picture books and graphic novels, Jarrett J. Krosoczka fully pulls the curtains back and dives, squarely and unapologetically, into the realm of young adult/adult work in his revealing and autobiographical “Hey, Kiddo.” In the process of sharing his family’s story, Krosoczka largely steps away from what he is best known for and has built a career on: humor and hijinks presented in clean, bright artwork. 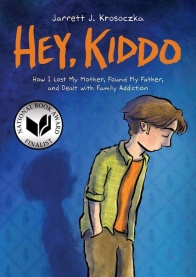 In its place, Krosoczka broaches the somber topic of drug addiction with a heartbreaking and steadfast honesty that reveals, explains, and holds no punches but that also excels at highlighting the humanity of those suffering from addiction and the resilience of the loved ones who suffer alongside them.

Over eight measured chapters, Krosoczka shares his early life story, which covers a period of time starting before his birth, when his grandparents met in high school, to the day he graduated high school himself. In all the pages between, readers learn of his mother’s many failed efforts to stay sober, hold a job, and live a quiet life outside of a jail cell. Though she is not shown much on the pages, her presence looms largely over them.

Krosoczka narrates the story with the more complete knowledge he gained of his family after growing up, but the Jarrett readers see wasn’t explicitly told of his mother’s heroin addiction until after he was in third grade. However, the reader also sees the many ways that Jarrett was exposed beforehand to the dangers of his mother’s addiction, from strange men and drug use in the house, to his mother stealing and offering refuge to two men after what appears to be a violent attack on someone involving a knife. Through it all, Jarrett’s mother never comes across as a caricature. Instead, she is complicated and messy.

While Krosoczka is depicting real people in this story, this is not the sole reason they come across as being so fully formed on the pages. Krosoczka has a skill for conveying the gritty truth of his family – including his grandparents’ regular arguments and drinking – while also showing off their more personal, candid, and sometimes humorous moments like eating Chinese food and inventing the fortunes found in the cookies. Or his grandmother’s penchant for reminding him of why his room was green from floor to ceiling (it was going to be hers before he moved in). Even the print design of the chapter heading pages is a small but noticeable touch that pays tribute to his grandmother and her quirky personality. The design is based on a pineapple wallpaper pattern found in his grandparents’ home and it makes its way into various kitchen scenes throughout the story.

Just as skillfully, Krosoczka finds a way of depicting the real events and conversations of his childhood in a manner that shows a semblance of some normalcy he experienced in his life. Although his mother suffered from addiction and he lived with his grandparents, there were some typical, everyday things, like hanging out with friends and dating, that took place in his childhood in the midst of his sadness, anger, and confusion. Even the collateral damage born of his situation is included in a way that shows Jarrett in a less than flattering but very human and very real light.

The messiness of the story is not just found in the telling of the story itself. Also largely done away with is the crisp, clean artwork of Krosoczka’s past works. The entirety of this story consists of unwieldy, borderless panels, with one and two page spreads sprinkled throughout. Within those panels is thick, loose, and altogether rough linework that comes together with a limited color palette of splotchy and nebulous shades of black, gray, and burnt orange to create a gloomy and subdued atmosphere. Although the burnt orange is ever-present, it rarely shines through unobstructed by a gray overtone.

The manner in which the colors blend and overlap each other gives the impression of peering through a haze, whether it is the literal haze of smoke that follows his grandmother Shirley and grandfather Joe, both smokers, or the figurative haze of living a life riddled by unknowns and uncertainty. Jarrett spends his young lifetime first not understanding why he can’t live with his mother, then never knowing when and where he’ll next see her. He simultaneously spends most of his childhood and adolescence not knowing the full name of his biological father.

The coloring is perhaps most telling of how Krosoczka viewed his mother while young. Scenes depicting her or incidents involving her often feature notably large blocks of inky black, as do those involving his nightmares and death (the passing of his pet, his grandmother’s miscarriage). Krosoczka has kinder, more understanding things to say about his mother as an adult but she largely comes across as a haunting black cloud that rains sorrow and disappointment on his childhood when she is actively in his life.

Because the text does jump from dialogue to narration, Krosoczka distinguishes between them through the utilization of colored speech bubbles: white bubbles for dialogue and a peachy beige for narration. Within the writing, curse words are used, particularly in the many scenes depicting one of his grandparents after they have had a drink, but the language is largely tame overall. Drug use is also shown, though it’s early on and minimal, making this story much more about the consequences of the use rather than the use itself.

Though humor is not a principal feature, Krosoczka does find places to include it. Some of those places include a laugh out loud classroom scene following a hand injury, a recollection of a conveniently positioned light switch on a wall where Jarrett paints his male school mascot, and touches of “dad joke” humor (mainly coming from his grandfather). Jarrett learns to drive in a cemetery because there is no one alive there to potentially kill as he learns.

The back matter includes an author’s note – in which Krosoczka shares what became of his grandparents, his mother, and how those events relate to the start of his own family with his wife – and a separate note on the art, including information on why the shade of orange used throughout the book was chosen, what process Krosoczka used in the act of creating the story, and how he worked some personal touches in. Artifacts follow each chapter and are sometimes included, in much smaller scale, in the chapters themselves. All but two – recreated for the book – are actual items from Krosoczka’s childhood.

While short, the author’s note does offer one more thing that gives the story a touch of positivity: in it, readers learn that in time, Jarrett was able to find a way to forgive his mother and see the love she had for him. But even without this, it is apparent that Jarrett found love, support, and stability – however imperfect – early on in his strong, unbreakable relationship with the grandparents who stepped in to raise him.