The deeds are done, the secrets buried and the mythology intact. “Hey Kids! Comics!” #5 rounds out a packed run on the nitty gritty of the comics industry, with emphasis on the gritty. 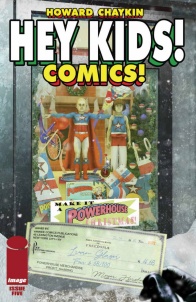 Cover by Don Cameron & Howard Chaykin
Written & Illustrated by Howard Chaykin
Colored by Wil Quintana
Lettered by Ken Bruzenak
The innocent seduced… and the credulous corrupted. Stories inspired by the way it really was, in a business where con men and liars stole everything they could from perfectly willing victims, selling second-rate stories of low-grade morality to an audience they saw as suckers, while living lives founded on greed and exploitation. And that, kids, is comics for you.

A test of good critical thought is the ability to hold simultaneous realities in one’s consciousness. “Hey Kids! Comics!” provokes such critical thought, because I can simultaneously appreciate the no-holds-barred attitude Chaykin brings to this industry exposé while struggling through page after page of a book that is, unfortunately, lacking on many fronts. Issue #5 closes us out and is arguably one of the best, because it’s more focused on the melancholy and bitterness of a few threads instead of the shotgun blast of unsavory behavior Chaykin treats us to in the other issues.

This book should be technically better than it is for a lot of reasons – not least of which because I know for a fact that Chaykin can draw – but overall, I don’t think his style translates well from page to screen. There’s something about the subtlety of his line and his shading on the physical page that evaporates in digital art. The line becomes harsh and confusing, with details detracting from faces and attempts to shade or blend disappearing into the colors or fighting with other elements details on the page. Character depictions are inconsistent from page to page, and there are way too many people in this comic over too long a span of time for that to be excusable.

Quintana’s colors are flat and the book lacks a unifying palette to help build any kind of mood. There’s a significant lack of pacing as well, with interior and exterior scenes jammed together and panels in sequences that seem like they only exist to support the dialogue, and Bruzenak’s lettering is too wide to contain all of the text the comic tries to include. Borderless balloons are a smart choice given the sheer detail in each panel, but become a real problem when your connectors are also borderless and I’m struggling to follow them both horizontally and vertically across the page, depending on who’s speaking. The book’s heavy emphasis on text makes me wonder why I’m reading this piece as a comic at all, if not for the sheer irony, and the technical issues with that text are a hard sell.

This book could’ve shone if it took an issue-by-issue approach to the decades instead of shoehorning them all into each. Retreading the same eras creates a wearisome cycle that’s emotionally cumbersome and mentally overwhelming given the aforementioned craft issues. While I appreciate how a linear approach to the problems within the industry might be challenging because so many of them existed simultaneously (often in human form), I’m left asking what the point of “Hey Kids! Comics!” is, exactly. Is it to deconstruct and expose how the medium’s built on shaky moorings, or is it a personal hate letter? As it stands, “Hey Kids! Comics!” reads like a vitriolic rummage sale of information that’s presented in a way to show us that every single person in the industry is terrible. More attention to the reader’s experience is needed, because this comic is not approachable for those readers to whom this isn’t new information, much less for those who have no idea about any of this history, and thus it’s easy to dismiss.

And the history itself is why this comic is of merit, because Chaykin doesn’t spare anyone in this oeuvre. With the very obvious Stan Lee analogue in Bob Rose, Chaykin’s illustrating what many know and what others will never admit: Stan was a fraud. What many don’t know is the participation of others in their own misery (to a certain extent), and the parade of other editors, writers and execs in the industry who also made a name for themselves as utter jerks and con men. In “Hey Kids! Comics!” it’s just as common to see artists trying to play each other as it is to witness the edicts handed down from editorial. While the Funky Flashman led the routine disenfranchisement and straight up falsehood charge through the industry, he was taking up the mantle of some and directly inspired others after him. While the issue of the ‘90s creators has been put to bed for many, for some the near-death experience of the industry is an unforgivable crime. The racism and sexism of the hallowed halls of the Big 2 and other companies also shouldn’t be ignored, particularly because of the current fan backlash against what some argue is unnecessary inclusion in comics. For many others, the inclusion is long overdue. Chaykin’s scope is grand, and he sets himself an almost impossible task in delivering it all in consumable way. The effort itself is notable, even if the comic suffers in its execution.

Chaykin has both the industry experience and the veteran status to tackle a story like this, and I’m glad to see that he did. It’s just a shame “Hey Kids! Comics!” wasn’t put together well enough to make a huge impact from a craft standpoint, and that unfortunately limits its potential impact.

Despite these issues, I think everyone should try an issue of “Hey Kids! Comics!” on for size, because what Chaykin’s covering needs to be common knowledge for the next generation of comic fans and creators – both so we know where we’ve come from, and so we can keep trying to do better.

Final Verdict: 5.0 “Hey Kids! Comics!” #5 rounds out a series that’s impressive in its scope and tone, but falls on its face in the very craft it’s documenting.