These are the Fantastic Four, Marvel’s First Family, the heart and soul of the Marvel Universe. And they are characters that I, unfortunately, have yet been able to connect to. Let me explain.

I came into comicdom later than a lot of my fellow colleagues on this site. I didn’t start reading comic books until I was in college, and didn’t pick up a Marvel book until the All-New, All-Different Marvel era, right after “Secret Wars,” which I have read and have also read Hickman’s “Avengers” and “New Avengers.” That all being said, the Fantastic Four have been absent for most of that time period, until very recently, as Dan Slott, Sara Pichelli, and others have relaunched the title. Before all this, the Fantastic Four were just two dorky movies, and a bombed reboot attempt. They weren’t a group I had given much thought to.

While I sort of vaguely knew that Jonathan Hickman penned a “Fantastic Four” and “FF” run with a plethora of artists (Dale Eaglesham, Steve Epting, Sean Chen, etc.) I didn’t know how highly people really thought of it until my one and only, brief claim to fame on the DC3Cast.  Since then this run has been one of the most recommended runs to me of backlog Marvel I need to get to (among a number of things), which leads us to the next six weeks of this column.

Now I’ll be honest: I’m not a great comic critic. On Make Mine Multiversity, we talk about news, and about books that have come out during the month, but we don’t score things, and I’m much more apt to talk about how something made me feel than I am to be able to adequately assign an arbitrary number to a work of art. That may be antithetical to some, but there have been very few times in my life that reading a review has made me want to go out and buy and read a comic. Having a conversation with someone about a series or an issue they loved though has worked almost every time. And recommendation articles like this one from a decade ago at sites like ours.

So for all those who have loved this run before me, I hope you’ll join me in this wade through what is sure to be me just telling you what pages made me feel something. I hope you’ll join in the conversation with me in the comment section or on Twitter, and that we can continue the conversation after I write some inadequate words. If you want to join along each week, the entire run is collected in trade, on Marvel Unlimited, and some of it is on comiXology Unlimited as well. This week we’re taking a look at five issues of the miniseries, “Dark Reign: Fantastic Four” which begins the journey. This is Hick-F4M. Welcome. 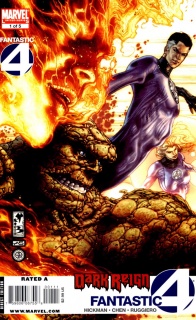 We start our journey in the middle of a Marvel Universe that looks quite a bit different than our current one a decade later. It is the reign of the Brian Michael Bendis grand narrative. The superhero community is still feeling the aftereffects of the first “Civil War,” and most recently the events of “Secret Invasion” – two gangbusters events that rocked the entire publishing line. This is back when you could tell stories like that, and it really felt like it had stakes across most every title being published.

Jonathan Hickman was coming off “The Nightly News” and “Pax Romana” in 2009, and beginning his Marvel era career taking on this and “Secret Warriors” at about the same time. Sean Chen, who illustrates this first miniseries, was an industry veteran, having done a ton of 90s Valiant and Marvel work by this point. They meet in what by all means could have been an inconsequential tie-in comic to ‘Dark Reign,’ but turns into the thesis statement for Hickman’s long run: Reed’s trying to fix everything.

At this point in the Marvel world, Norman Osborn has taken over SHIELD and converted it into HAMMER, and is running a team of Avengers and asserting his dominance, and making sure all heroes are registered and complying with the government. That’s where the ‘Dark Reign’ aspects of this story come in, but if not for HAMMER agents being the catalyst for the accident that lands Sue, Johnny, and Ben reality-hopping for four issues, this is pure original story, and the horse guiding the buggy rather than vice versa. This the way to do a tie-in comic, and outshines many a “bannered” comic I’ve slogged through.

The story begins as the family is moving back into the Baxter Building after the Skrull invasion. Everyone gets distracted moving, and Reed winds up building The Bridge, a device that will allow him to examine every Earth and it’s history to find patterns and solutions for his Earth’s problems. Mostly he blames the Skrull invasion on himself and his role in the Illuminati and in the civil war prior, and wants to know if there was something that could’ve been done.

HAMMER invades and cuts the power to the building, which then has us following three stories: Sue, Johnny, and Ben trapped and traveling to various realities in hilarious fashion, Reed replaying other world’s narratives and trying to play God, and Valeria and Franklin spending the night by themselves waiting for their folks to come home. All of this culminates in Osborn coming back to the building and the fam standing their ground and sending him away (and Franklin shooting him in hilarious fashion).

All three of the stories are so effortlessly balanced, and I say effortless because none of these comics seem stuffed or overly wordy at all. In fact all five issues contain immaculately rendered double-page spreads from Chen, Ruggiero, and Rauch that have almost no dialogue or narration, but convey such vision, emotion, and scope. This includes all of the title pages for the issues, like this one from issue #2. 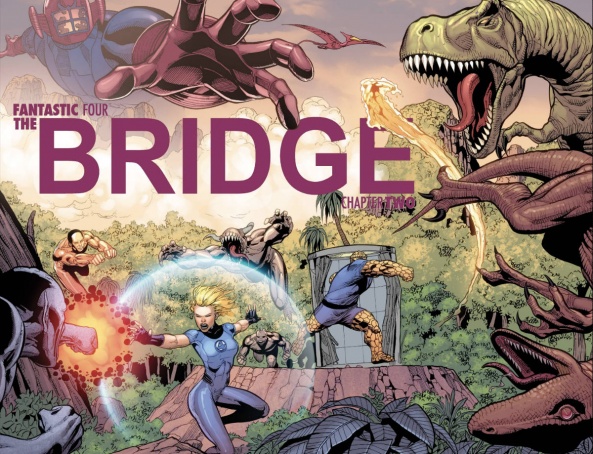 All of these double pages serve as beautifully rendered introductions and also just add a fluid sense of pacing to the issues. They also just let the art speak for itself, and showcase the best of what this artistic team have to offer.

The characterization of Reed and his running plot is my favorite of the three, followed by Franklin and Valeria, and the time-traveling antics of the other three. If Sue, Johnny, and Ben’s arc is more Doctor Who, Franklin and Valeria’s Home Alone, then Reed’s is akin to the best bits of something like Star Trek and Rick & Morty. He flies through Earth after Earth, reality after reality, which Hickman portrays with matter-of-factness. Marvel doesn’t do a whole lot with their multiverse, that’s more DC’s thing, but watching all of these various continuities with minor tweaks is 100% my jam. If you’ve listened to Make Mine Multiversity, you’ll know some of my favorite things comics do is call attention to, in the zaniest way possible, the larger continuities and worlds at play. When a world feels “filled out” and “live in” and “real” is when I have some of the most fun reading. Hickman does that here on a multiversal scale, all the while giving us a Reed who is guilty, anxious, and desperate – three things genuises should strive to not be. His perception of himself is not arrogance, but objectivity, and that’s where I imagine he’ll get into trouble. He’s also not cold though, otherwise there would be no need for this. I love the last issue where he sort of “unlocks” these mystery folks when he looks for realities where he has created other Bridges. It reminded me of Star Trek‘s Prime Directive of only interacting with warp capable species. Reed just worked himself into a higher realm (which should tell him something about objectivity, but oh well). 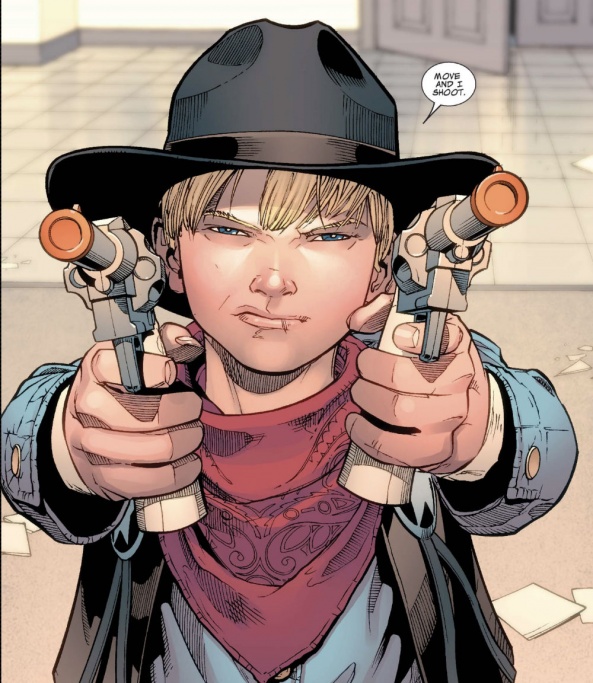 Valeria and Franklin are just the best. I thought Franklin’s cowboy get up might get old after a few issues, but it just gets more endearing as the issues go on, especially as he gets a shot off on Osborn in the last issue. Valeria also portrays herself as ever the resourceful genius and caretaker. It’s watching them two interact that I realized that there is much less superpowers on display in these five issues than you might think, or that you’d expect, or than it feels like. Most of the heroics are on display in the realities that Sue, Ben, and Johnny are in, but even then less so as most of what’s happening there is these other worlds on display. It speaks to how well Hickman writes the siblings as siblings, and the family as, well, a family that what could just be conversations are rendered endearing and important. The kids feel like actors with agency, not afterthoughts, and it goes a long way.

The final piece of the puzzle comes in the tiered stories that are told with other three members of the family. Sue, Ben, and Johnny have a multitude of versions of themselves running around settings from Tudor England to the Kree homeworld. It’s fun and builds worlds in worlds in worlds as these various versions start to carry over. While sort of “extra,” it pads out and sells what Hickman has going with Reed’s various worlds – that he knows how to deal with multiple versions of the same characters, which is a theme he has continued to play with all throughout his career. 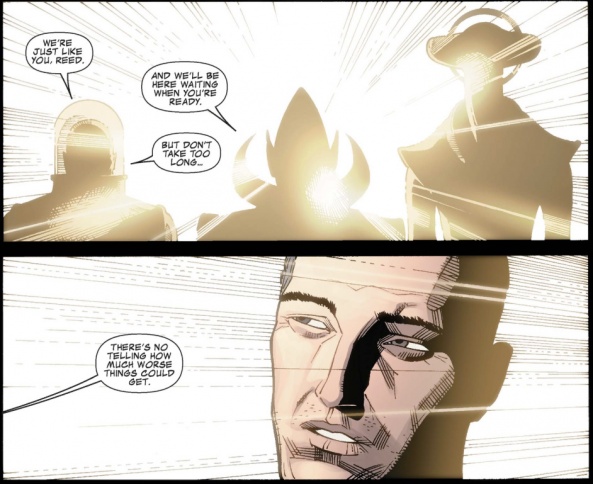 our mysterious party from issue #5

Hickman, Chen, Ruggiero, and Rauch set up a, forgive me, fantastic foundation for which Hickman and his other artistic collaborators will build on going forward. Chen’s art is very old school, and fits in in this 90s/00s aesthetic, and although suffers a little in the lighter moments, sells that this comic is about the family and Reed’s anxiety as we move forward. This was a great debut, and more than should be expected from any tie-in comic. I have a feeling that this book’s best days are ahead of it, and I’m so looking forward to more.

We’ll be back next week with more, as we move on to the main series. We’ll be looking at “Fantastic Four” #570-578 which contains the first two arcs of the run and features art from Dale Eaglesham and Neil Edwards. You can find those issues on Marvel Unlimited in “Fantastic Four” 1998-2012, collected in trade, and on comiXology Unlimited where the first few issues are available. Sound off in the comments below and we’ll see you next week!