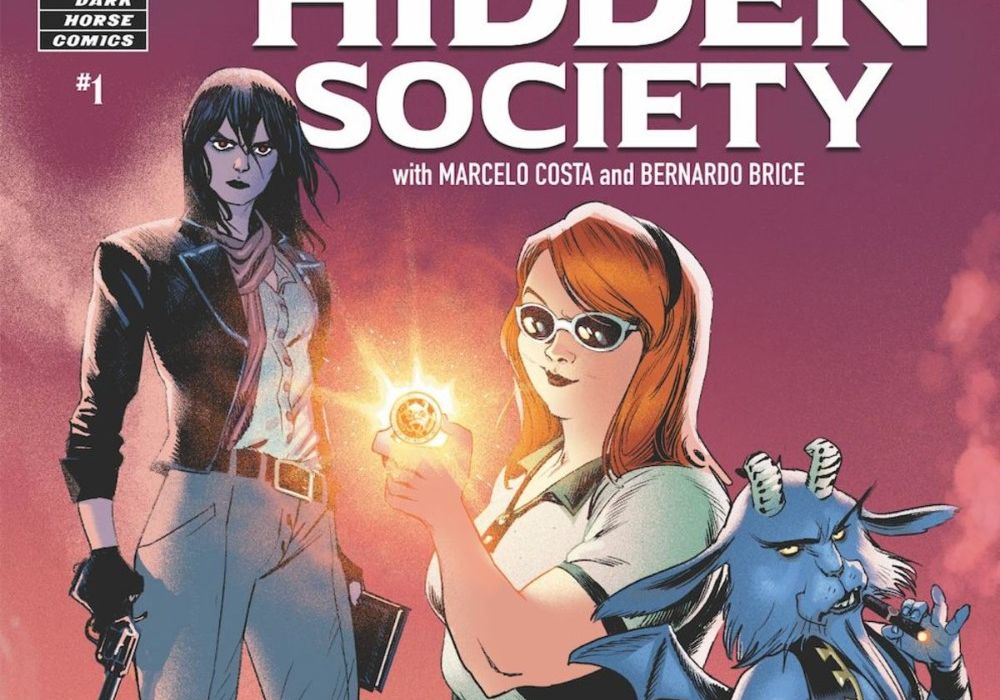 There has been no shortage of stories that convey the idea of the hidden, magical world underneath the supposedly mundane one we occupy. Ever since Harry Potter hit us hard in the late 90s, this style of narrative has been explored nearly to the point of exhaustion. So what does “Hidden Society” have to say about this type of genre fiction that hasn’t already been said before? Read on as we take a look. 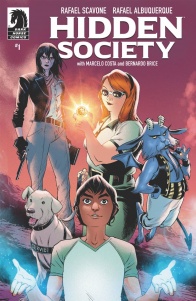 A new series from Rafael Albuquerque and Rafael Scavone, the team behind Neil Gaiman’s A Study in Emerald! Hidden from ordinary eyes, there is a world alongside our own full of deities, demons, and danger—where magic wins out over science and dark secrets lie in wait. Ulloo, the last wizard from the Hidden Society, enlists the aid of a blind girl and her demon, a young magician, and a cursed bounty hunter in order to stop a group of nihilist warlocks from waking the Society’s greatest nemesis: a primeval force that, unchecked, will scorch the planet bare of all life.

Scavone does a good job introducing each of the key characters one by one here, showing off each’s individual agenda before unknowingly bringing them all together. There’s a delightful whimsy to each of the characters that are channeled through alignments, with the first character Mercy being something of a rogue assassin making asshole men accountable, and the child magician Jadoo being a bit of a rockstar but ultimately hapless in his performances. Laura shines as the most interesting and likable here, however, as a blind woman who is aided by her guide dog Ozzy and a magical brooch called the Orcus Cameo, which the sheer fact that it has somehow fallen into her hands leads to more speculation and interest than a lot else in the book. The wizard Ulloo that brings everyone together seems fine, but he seems like more of a typical Dumbledore archetype at this stage without getting much of a chance to feel unique.

And that’s where my main problem with this debut issue comes in. Scavone does spend plenty of time developing these characters and explaining motivations, that we don’t get as much in the way of plot and world-building. Sure, it’s one thing to have deep characters, but sacrificing the chance for the plot to come off as original and interesting feel like some wrong choices were made along the way here. The best we get is whenever any of the key characters use the magic powers specific to this book, as each of them uses them in a way that befits their own alignment and personality, but still has it very much tied to the archaic way Ulloo presents it. The most annoying part is that we don’t get anything in the way of a genuine threat told at this stage, so we don’t really know why these characters have been assembled even in the first issue. It’s frustratingly slight and forfeits the chance to feel truly original in its debut issue.

Albuquerque proves to be a great veteran artist in this issue as lays a lot of the groundwork in making this story feel special. There are some great subtleties in the character work that elevate each cast member into being smug, knowing and interesting. Even the asshole poker player Rickey from the first sequence of the book has a kind of offputting smarmy charm in how confident he is with his cheating abilities and how constantly aware he is of his surroundings. I love then how Mercy plays down her own personality when around him right until the last minute when she pulls the same eerie confidence on him when using her life-draining magic. Laura and her genie (?) Orcus have a whole lot of visual personality too, almost to the point where they could have easily walked out of an early 20th century Disney short. Laura bubbles with buoyant energy as she almost struts down the sidewalk and Orcus floats around like a veritable Jiminy Cricket, only armed with a cigar, a vest, and a bad boy personality.

The way that the characters interact with the world around them is pretty solid, though the world is not always the most exciting to look at sometimes. Albuquerque gets simple sequential ideas like having Rickey move his chair to sit in it, rather than just having him stand over it or be in it, and the same goes for the different ways that the men at the table are both uniquely sitting. I also love the sequence of Jadoo interacting with his mirror and having Ulloo pop out of it to whisper the magic words. There’s a real growing and fading physicality to how Ulloo appears, and especially how Jadoo reacts to the smoke that is left behind by his presence, giving another instance of great character acting. There’s just not a whole lot there to make the environments super exciting. Most of the streets and areas are deserted save for the characters that need to be there for the plot, so it feels more like a stage show than anything. The alleyway Laura is in feels a lot like this, especially the characters never do things like hiding behind dumpsters or really involve the messy area around them in any way.

Marcelo Costa does provide some smooth, nicely textured coloring for this comic. The smudged shading technique and use of low-saturation palettes give off a very British, 1970s feeling which feels appropriate given the theme of the book. I love the use of lighting in the pub, especially when Rickey wins the poker match. Costa uses a single, glowing source of light that bounces off all interiors and the characters in the scene, giving it a very inner-city-at-dusk feeling. The way that all the supernatural lighting and effects are rendered has a very old school cabaret feeling which I enjoy a lot. From Ulloo’s Wizard Of Oz-esque glowing greens to the searing, incandescent lightbulbs surrounding Jadoo’s mirror, it all feels very camp and very much part of a play, which feels endearing when it’s taken seriously within the source material.

“Hidden Society” is certainly a fun debut issue, it just doesn’t do enough to really hook me into the internal conflict, or lack thereof at this point. Scavone does character work really nicely, making each member of the cast feel unique, but can’t balance this with substantial plot work. Albuquerque, however, does some great character acting and drama and makes the way that the characters live within the world around them super fun, for the most part, while Costa brings everything to dreamily vibrant life.

Final Score: 6.9 – A fun character study but an ultimately unoriginal premise, “Hidden Society” doesn’t do enough to separate itself from the pack in this debut.