When I was in fourth or fifth grade, my loving mother blew about forty-something bucks on The DC Comics Encyclopedia: The Definitive Guide to the Characters of the DC Universe for me. I loved that book more than anything, read every entry in the massive tome at least twice. Looking back, a lot of my initial comic book knowledge came from similar supplemental materials instead of actual comics. I bought a couple at Scholastic book fairs. My friend Horace had a Marvel Encyclopedia while my little brother had one for Batman and another for the Justice League. Going into “History of the Marvel Universe” #1, I expected a comic but ended up with another encyclopedia. 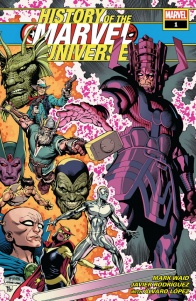 Written by Mark Waid
Illustrated and Colored by Javier Rodríguez
Lettered by VC’s Joe Caramagna
ALL-NEW STORY BY LEGENDARY CREATOR MARK WAID! Everything you ever wanted to know about the Marvel Universe — in one lavishly illustrated series! From the Big Bang to the twilight of existence, HISTORY OF THE MARVEL UNIVERSE chronicles completely, for the first time, everything that was, is or will be! Lushly illustrated text tells the complete story of the Marvel Universe, revealing previously unknown secrets and serving as the ultimate reference book for Marvel fans! Witness the greatest tale ever told — and be prepared for some shocking revelations!

The issue opens with Franklin Richards and Galactus at the end of time. It’s the end of the road for the Devourer of Worlds but Franklin’s going on to the universe after this one. Before he goes, he asks Galactus to help him remember everything. After the framing device is out of the way, the issue details historical events in the Marvel Universe from creation itself to the end of the nineteenth century.

One thing that immediately leaps out about “History of the Marvel Universe” #1 is that it is a lot to take in at once. Franklin asked for help remembering ‘everything’ and Galactus definitely obliges on that score. Maybe it’s just me, but this issue felt overstuffed. I mean, do you need everything? A two page spread in here starts with vampires, jumps across space to Silver Surfer and back to England for the Hellfire Club. #1 features a lot of Marvel deep cuts, obscure factoids that probably could have been left on the cutting room floor. As the issue went on, it seemed like there was more and more that didn’t really need to be included. Is it really necessary to go over the Alpha Primitives or Tyrannus or Fin Fang Foom? They really could have taken all of the events here and spread it over two issues.

As much as I’ve enjoyed comic encyclopedias in the past and would have loved to have one illustrated start to finish, I think the issue suffers a bit from lack of focus. With an encyclopedia, you can put it down at any time. Read an individual entry, come back to another over time. This is multiple loosely collected entries all at once, coming at you in rapid succession. I’d have liked it better if it followed a narrative like Alex Ross and Kurt Busiek’s “Marvels”. That comic also covers many years of history but follows a singular character growing and changing over time with the world around him. Even the more recent “X-Men Grand Design” by Ed Piskor, which also juggled a lot of stories and characters, had a clear focus on the history of Xavier’s team and mutantkind.

Going in, I thought that “History of the Marvel Universe” #1 would be new reader friendly. The title makes it sound like it’d be a great place to start but that’s not really the case. There were moments where I was lost myself and I’m all about comics. The annotations at the end helped after the fact but still. This issue is a mix of long since established history and stuff that’s just been newly established in the last few years or so. That’s cool but also kind of a problem. Let’s say you weren’t into Jonathan Hickman’s “Fantastic Four” run when he introduced the Universal Inhumans, for example. Maybe Al Ewing’s “Royals” wasn’t on your pull list two years ago and you have no idea what a ‘Progenitor’ is. Maybe you haven’t been following Jason Aaron’s “Avengers” that started just last year. If you missed something in comics…good luck.

Though hard to follow in some places, I can’t say it wasn’t pretty enjoyable. I loved the art. Javier Rodríguez is an inspired choice for the book’s artist. The Marvel Universe’s history is big and crazy and if you read “Exiles” from him and Saladin Ahmed, you know he does ‘big and crazy’ very well. Rodríguez doesn’t go for hyper-realism and embraces the craziness of the medium with wild pages and bright, vibrant colors.

There are plenty of standout moments here. The page that covers magical characters like Merlin and the Black Knight looks like something out of a children’s fairy tale story book with magic vines, goblins and knights all about. In the opening pages that cover creation, Galan of Taa is transforming into Galactus step by step, from a formless ball to cradle to birth. The origin of Galactus’s herald Silver Surfer parallels that and Norrin Radd’s transformation is also shown step by step. The panel that shows the birth of the Eternals and Deviants is just great. Out of the left hand of a massive Celestial, the futuristic, smiling, colorful Eternals take flight. Out of the right hand, the monstrous, grotesque Deviants descend into the Earth. If the art is just as good in the next issue and the history lesson could slow down just a touch, we’ll be aces.

Final Verdict: 6.5 – Marvel’s history is truly a marvel to behold…it’s just a lot at once.