One of the most satisfying parts of reading a long creator-driven comic run is seeing certain themes grow and develop. My personal favorite tool for this is the one-off issue: a breather, a respite between larger arcs, designed to settle subplots and expand on the book’s major themes. In my recent read-through of Garth Ennis and John McCrea’s late-90s sleeper hit “Hitman,” one issue stuck out to me as the perfect example of this. 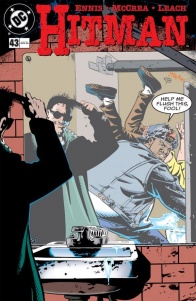 After the events of the last arc, Tommy goes to Wendy’s and falls into some old habits and makes a decision that he will definitely regret–especially when Teigel finds out about it!

In the beginning, “Hitman” was a wacky little title about an Irish killer-for-hire, Tommy Monaghan, and the murderous misadventures he got into, helped along by his x-ray vision and mind-reading powers. Around a third of the way through the sixty-issue run, though, Ennis and McCrea all but ditched the superpowered elements and turned the book into something far deeper. “Hitman” ultimately became a series about brotherhood, identity, and most of all, consequences. By the time issue #43 rolls around, Tommy has lost some of his closest friends, his relationship falls apart every time it gets started again, and every new hit he takes on leads to larger and larger troubles. And yet, he keeps on living the same way he always has. Therein lies the core of Tommy’s character: he’s a self-destructive motherlover who can’t help but screw things up for himself, yet remains oblivious on how to improve.

“Hitman” #43, though never explicitly stated or discussed, is all about consequences. This manifests in three different plotlines. The first has to do with personal discoveries he’s recently made, the second is about his relationship, and the third deals with a hit he and his friend Natt make.

Scenes about his relationship start and end the issue, so it seems apt to tackle that first. During a chat with his surrogate father, Sean, Tommy says that he won’t tell his girlfriend, Tiegel, that he cheated on her the night before. “What she don’t know won’t hurt her,” he says, with full confidence that it will never come up and that she will never find out. Ironically, by the end of the first page that Tiegel appears on, she’s already figured it out, immediately after which Tommy is punched in the face, scornfully broken up with, and pissed on by an elephant. In Tommy’s world, consequences are immediate. So how is he able to remain so confident that he’s immune to them?

In the second and shortest plotline, Tommy is finally talking to Sean about how Sean hid elements of Tommy’s past from him. This time, Tommy is a bit self-reflective about the situation. He’s mad at Sean for not telling him the truth about his past, yet he understands the tough situation Sean was put in. Tommy then turns his earlier mantra inwards to vindicate Sean’s point of view: “What I don’t know won’t hurt me, huh?” He respects the decisions Sean made, but still, Tommy eventually found out and it caused both of them pain. There are always consequences to every action.

The final plotline shows Tommy and his best friend, Natt the Hat, going on a hit together. They’re going after an, as they say, “incestuous child molester.” It’s a ridiculously easy hit. The dude’s in a noisy bar, doesn’t recognize them, and heads to the bathroom. They just need to get into the bathroom and nobody will hear the silenced gunshot. And so, of course, Tommy forgets the gun silencer. He’s reckless, and yet he’s still certain things will work out. So what’s their solution? Drown the idiot in the toilet. It’s all played for laughs, especially seeing how Tommy makes Natt do the actual drowning. Even afterwards, we’re meant to laugh at Tommy’s cool confidence in the face of a fumbled, just-made-it hit. But there’s truth in the entire situation, and particularly Natt’s reaction. Tommy has to be more careful. His luck is running low. He can’t keep living like this, because it will lead to his death if he doesn’t change soon.

This all brings us to the glorious final scene, in which Tiegel invites an excited Tommy back to her apartment, only to surprise him with her idea of vengeance. The final line in the issue is probably the best way the issue could have ended. “There’s a lesson in alla this, ain’t there?” Tommy asks, bare-naked, staring down a growling lion.

This scene is a wonderful microcosm of what makes Tommy such a compelling character, tying together the entire series so far and foreshadowing his inevitable end. Tommy gets himself into terrible situations, and he tends to get out by the skin of his teeth (even here, though we aren’t shown his rescue from the lion, we know he’ll make it out by the time the next issue starts). He screws up, and it’s led to the deaths of his friends and the corruption of his relationships. Yet he keeps on doing exactly what he’s always been doing. He keeps killing, he keeps cheating, he keeps getting by out of sheer luck, and he knows that he and his remaining friends will die sooner rather than later. He is incredibly flawed and human. But the most compelling part of all? As long as he’s able to kick back at Noonan’s bar at the end of the day, beer in hand and friends by his side, he’s content.

I’ve been very focused on the writing during this review and haven’t really discussed the art. So, suffice it to say that McCrea is a perfect fit for this series, taking everything Ennis gives him and making as clear storytelling decisions as possible. In the panel immediately before Tiegel figures out Tommy has cheated on her, Tommy stands alone in the frame with a very visible hickey on his neck, drawing our eye to it as the one abnormal aspect of the panel. The scenes in Noonan’s have beautiful depth of field, sometimes capturing as many as four layers in one small panel: Sean behind the bar, the bar, Tommy in front of the bar, and the people immediately behind him. And of course there’s the overall noir aspects to his art that lend Tommy’s world a gritty feeling, sometimes blacking out more than half of a character in shadow without ever losing clarity or emotion. Ennis and McCrea make a beautiful team, and by this point in the run, McCrea has developed into a master storyteller.

If you’re looking to try a one-off to give you a taste of “Hitman,” this isn’t exactly it. For that, I’d recommend the much-lauded issue #34, in which Tommy and Superman meet and discuss what it means to be American. Still, #43 deserves to be equally lauded for its thematic strength and role as a connective piece in a larger 60-issue story. The whole series is up in DC Universe now, so check it out if this review piqued your interest!