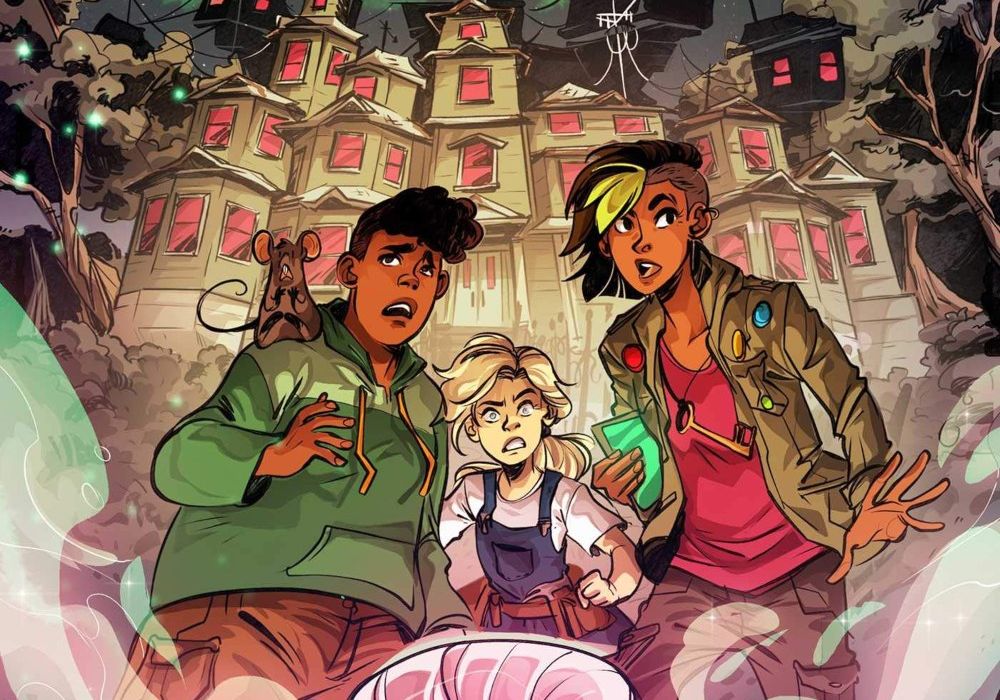 Siblings Olivia, Darwin, and Charlotte Dare are sent to Mexico so Charlotte, the newest member of the family, can meet their abuela Lupe. When they arrive in Mexico at Lupe’s dilapidated and patchwork hotel, they find themselves with more questions about their family’s history than when they arrived. 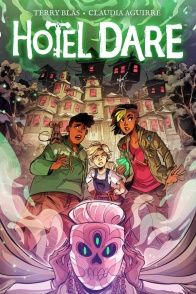 “Hotel Dare” makes a concerted effort to pull off an epic portal fantasy adventure, and while it is an enjoyable story to dive into, it ultimately falls short of pulling all the pieces together. Instead, its strengths lie in its inclusivity and its artwork.

While “Hotel Dare” does well to represent marginalized groups – it includes queer characters, people of color, and a blended family in adoption – the story suffers from trying to do too much in too little space. Within the 144 unnumbered pages, the multi-world portal fantasy sees each of the Dare children going off on solo adventures that eventually come together as one unified and interwoven storyline. In all, there are four worlds and nine characters fighting for attention, each of which has their own set of issues and conflicts. Many of those conflicts appear to be arbitrary and those that give the impression there is more to be known don’t give much away over the course of the story.

As an example, we know that the character Brad, from the world of Bramble, is mistreated by the wizards in his kingdom and readers learn he was never given proper training to become the wizard he could be (even without a beard). What is never revealed are the motivations behind this treatment by his elders. Readers may assume that it is a direct cause of the “correlation between beard length and magic strength” rule of the kingdom but there is no nuance in character among the elder population if that is the case. They become caricatures to push the story in a direction that allows Brad to be an insecure outsider looking to join a chosen family (the Dares). This works well enough with the strongly and explicitly stated overarching theme regarding the importance of family, including “found” families. But because the theme is so forcefully inserted into the dialogue, it comes across less as heart-warming and inspiring and more as proselytizing and unnatural.

Additionally, the moments of character growth that take place in the story are virtually unseen. It’s easy to understand the decisions and actions of the characters – they make a logical sense in most cases – but they are hard to emotionally connect with. The story itself is not a bad one; it simply would have benefitted from splitting into multiple volumes to give the characters room to visibly grow, to allow the various worlds to be better fleshed out, and to give more depth to their hastily shared personal conflicts.

Abuela Lupe is one of the few characters who does get a fair amount of time and attention. We learn her struggles with her son are related to her devotion to her lost husband and daughter, and we see that her imperfections are rooted in good intentions. Rightfully, those good intentions don’t diminish the impact they had on her grandchildren and readers are shown that as well. We have reason to believe that impact contributed to Darwin’s sensitivities and to Olivia’s obsession with the relationship between her father and grandmother, but whatever relationship there is, it all happens off page and remains unaddressed moving forward.

The story also makes way for language-based inclusion. Spanish is unapologetically used throughout the story without translations or italicizing – something that can ‘other’ a language by calling it out and treating it as different than the ‘normal’ or ‘default’ language of English – but Blas does occasionally provide contextual clues to ease understanding for those who don’t speak the language.

Visually, the story suffered, albeit minimally, from unclear transitions. The characters would be seen in different outfits or situations from panel to panel, making it obvious time is passing, but little other context is given to know just how much. Weeks are conveyed in a handful of panels and an unknown amount of time is covered throughout the rest of the book. While this doesn’t have notable consequences for the understandability of the story, it can create a slightly jarring experience while reading it.

Another disconnect that occurs between the art and the reader can be found in the cover art. The cover appears to promise one thing to the reader – a suspense or soft horror – but the story itself delivers something else entirely.

The backgrounds in the story oscillate between minimal color swaths in the many vibrant tropical colors that appear throughout the book (mango orange, watermelon pink, and kiwi green) and richly detailed and complex settings. The former is a nice nod to the vibrancy of Latinx culture while the latter is enjoyable to explore, offering fun visual asides at a level of detail not found in the writing.

Many of the characters were also drawn with an abundance of expression and personality, even if their stories weren’t fully fleshed out. Sunny, the Cuddlemuffin, and Abuela Lupe in particular are fascinating characters to both watch and learn about. Blas also succeeds in creating enjoyable strong female characters for the story, particularly Abeula Lupe, Captain Benjamina, and Olivia. All are caregivers who aren’t afraid to jump to action when needed.

Much like life, the story doesn’t end with all problems solved; it’s unclear what will happen to Abuelo Justino or the characters who were forced to leave their homes to avoid cruelty at the hands of their people. Blas, however, does give the reader every reason to believe that despite those uncertainties, the characters have found a place to belong. Blas shows he is capable of imagining intriguing stories and characters. He would simply do well to take his time in exploring them for the sake of his readers.